Remote work is a huge part of today's landscape. Some time ago, it wouldn't have gotten the consideration it does now, and outfitting a remote workspace was not necessarily a primary concern. So, why would you even consider what your small home office layout would look like, when your arrangement was temporary, and you likely didn't think that much of it?

Today is a different context though, and remote work is seemingly as normal as traditional office work. Some people never see an office, while others have a hybrid style where they work from their offices sometimes and work from home during other times.

Unfortunately, being at home can have the side effects of creating a bit too much comfort. Ordinarily, comfort would not necessarily be a bad thing, but the sheer level of relaxation you feel from being in your own space can contribute to a huge productivity cut.

It's proven that one of the best ways to avoid that is to have a space that screams work. If you're working from your couch in front of the TV, then you are certainly going to have some problems maintaining your focus.

However, with a proper small office design layout, you plan your workspace and design it in a way that is conducive to your comfort and a high level of productivity. So, how is whatever you read here today meant to help you?

Well, prepare to discover some very interesting small office layout ideas that should give you the inspiration you need to put your space together. Note that these ideas can be as complete or as foundational as you want them to be.

In other words, they can represent complete small home office layout choices if that is what you want them to do. You wouldn’t need to improve on them in the slightest, and they would still get the job done and beyond.

Alternatively, you can use them as a starting point and make whatever changes you need to help yourself feel more comfortable. This is a subjective decision after all, especially since you're the one who is going to be using the workspace at the end of the day. 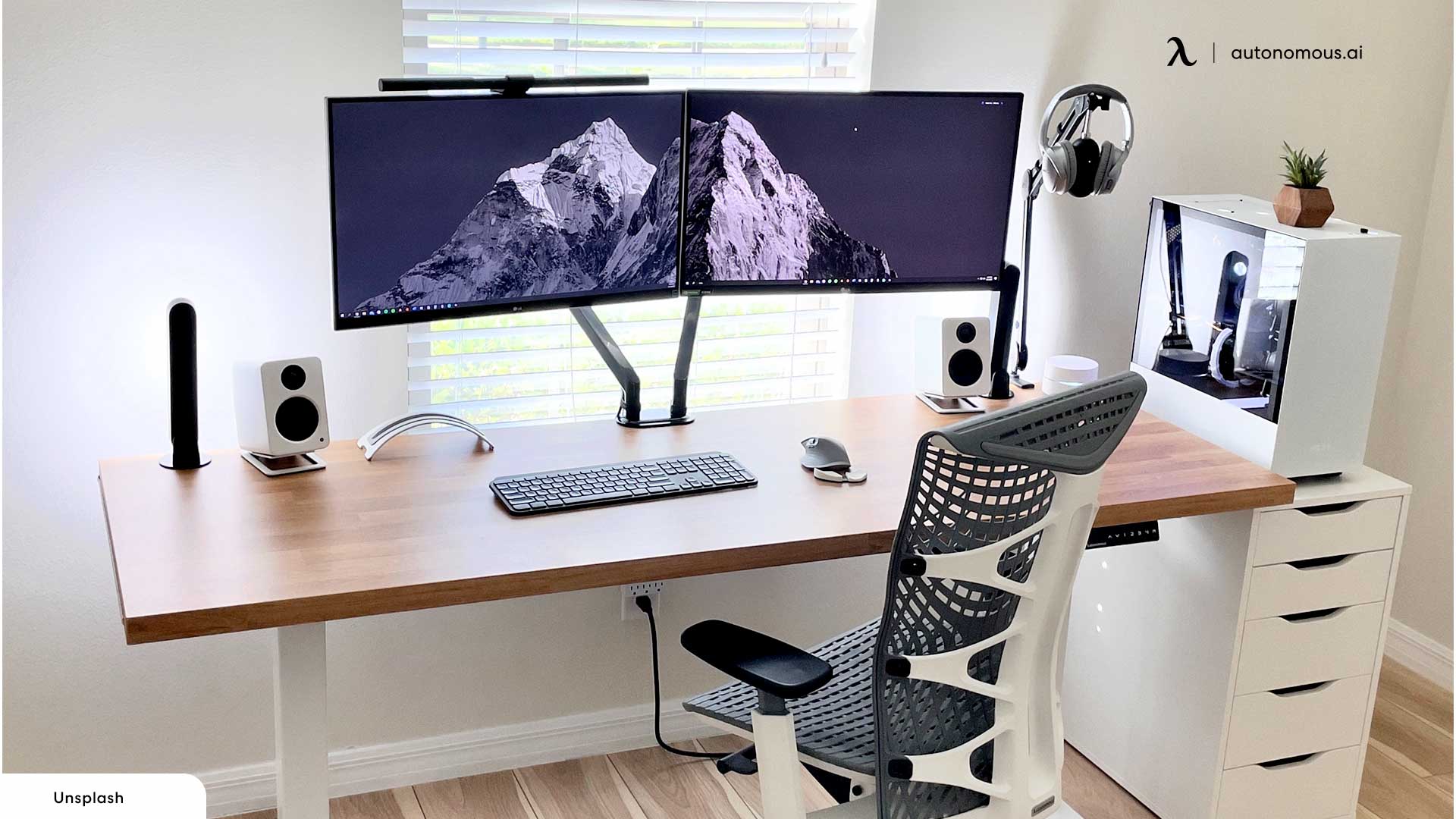 Before jumping into the actual layouts, there's a lot of value in discussing the equipment that goes into the equation. It can be incredibly tempting to forgo getting quality products in favor of those that are cheaper.

Doing so only makes you spend more in the long run because those kinds of items rarely last long and they're unlikely to give you the kind of functionality that you need for high levels of productivity.

Equipment in this sense spans various areas and items including your electric standing desk, ergonomic chair, and your smart office accessories. Of course, considering the focus is on smaller offices today, you are going to want to ensure that these items are as compact as possible.

There is no point in cluttering your space to the extent that you can't even move around and function in it. It gets even worse if you are one of those people who finds it hard to focus when your environment feels cluttered.

Below is a look at the incredible ideas mentioned above. If you or someone you know is good at using floor planning software, there may be value in doing so, as it helps you to visualize what you are going for.

Note that even if you don't have custom systems, the built-in paint application or even a word processor should be enough to get the job done for you.

It's one of the best ways for you to evaluate the dedicated space you have and see where you may be able to put your compact desk or small ergonomic desk chair, for example.

So, as you are reading the description for these potential candidates, try to visualize them and plot them in one of these software systems. If no such thing is available to you, then going the tried and tested method of drawing on paper works too.

You don't need architectural experience to pull this off. Remember that it only needs to make sense to you, so much so that you can explain it to anyone who may be helping you to put the space together. 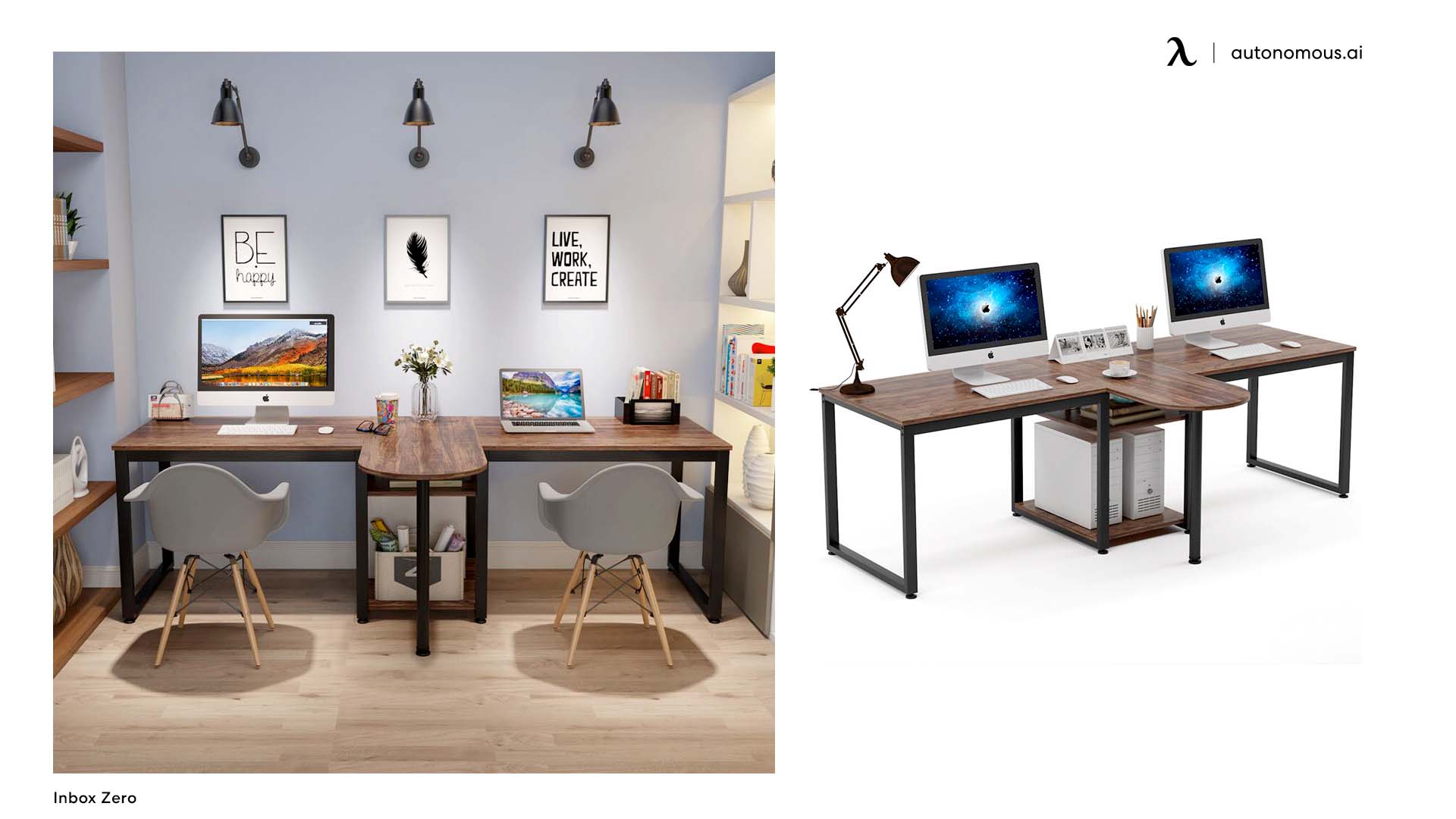 The first small home office layout is targeted at those who may want something that can work for two. Sometimes, there are spouses or other pairings of people living in the same house who both need a workspace.

The T-shaped layout allows both persons to have individual workspaces that are conducive to getting their jobs done and taking small breaks while interacting with each other.

One of the walls is the main point of the workspace. Two desks would be placed along the wall side by side, which are going to form the foundations of the workstation. Of course, the long sides of the desk would be touching the wall.

You would then get a third desk and put its short side against the midpoint of the other two desks, giving you a sort of divider.

The idea here is that the chairs would then be placed along either of the first two, and both persons could turn towards the third desk to move away from their workstations when it's break time.

If you wish, you can have a bookshelf at the opposite end of the room. Note that there are T-shaped desks that can achieve this small home office layout without the need for multiple units, but using them would compromise on adjustability and the potential for using a small standing desk. 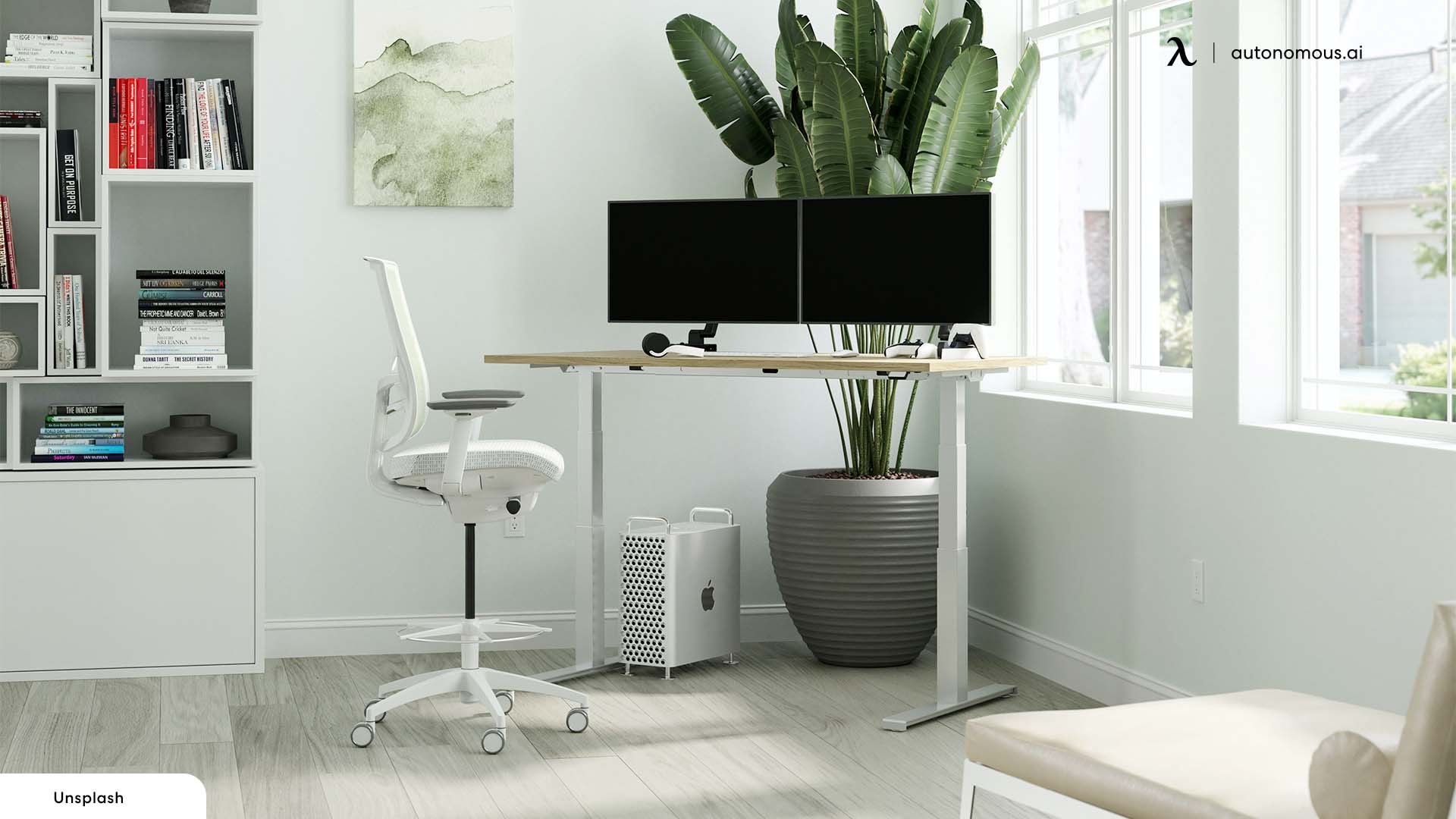 Office designs tend to use vertical and horizontal placements only. However, you can have a neat diagonal placement if you know what you're doing. What you would do is have your workstation chair aligned diagonally with the back of it pointing toward one corner of the room.

Ideally, the left side of the office chair would roughly align with your door or the entrance to the space. The desk would then be diagonally aligned to match the chair.

Across from the desk, you could have two seating spaces for yourself during breaks or others that may come into the office for a discussion with you. Again, you could place a bookshelf along one of the walls if you wish. 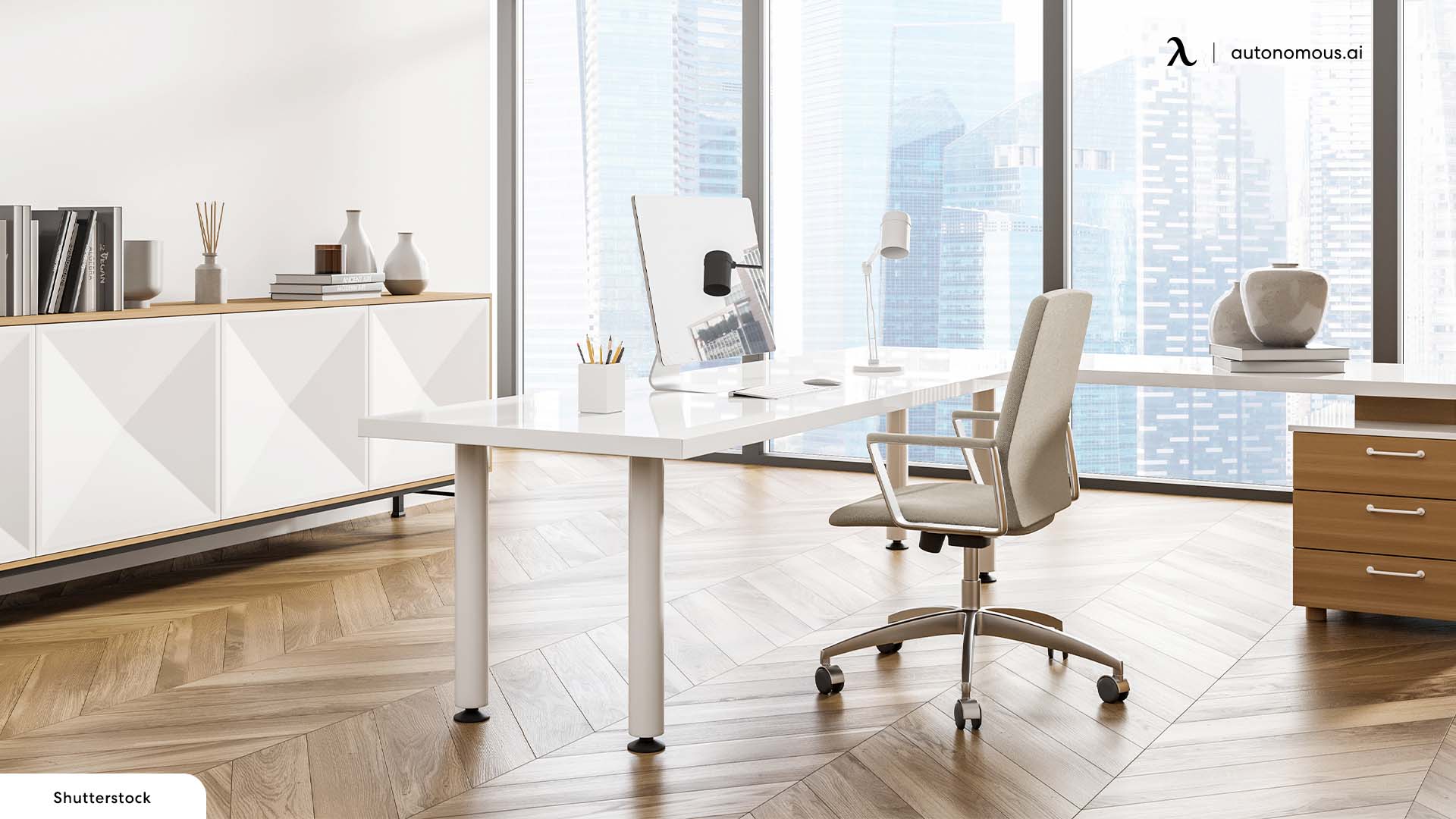 Depending on the nature of the work you do, you may benefit greatly from having an additional workspace. This configuration aims to give one person two different areas, allowing for switching just by moving your office chair.

You could have one desk pushed against a corner. The configuration would see its long side touching the wall that has the door or opening to the office space.

The other desk, which would be a compact desk in this case, would be placed in a way that sees its short side aligned with the long side of the first one. So, you can think of it as an L-shaped office desk with a huge gap between its two subsections.

That way, you can simply slide from one desk to the other depending on what you need to get done.

Of course, a bookshelf could be placed along the opposite wall from the second desk with two chairs in front of it for either relaxation purposes or interacting with those who may come in to see you. 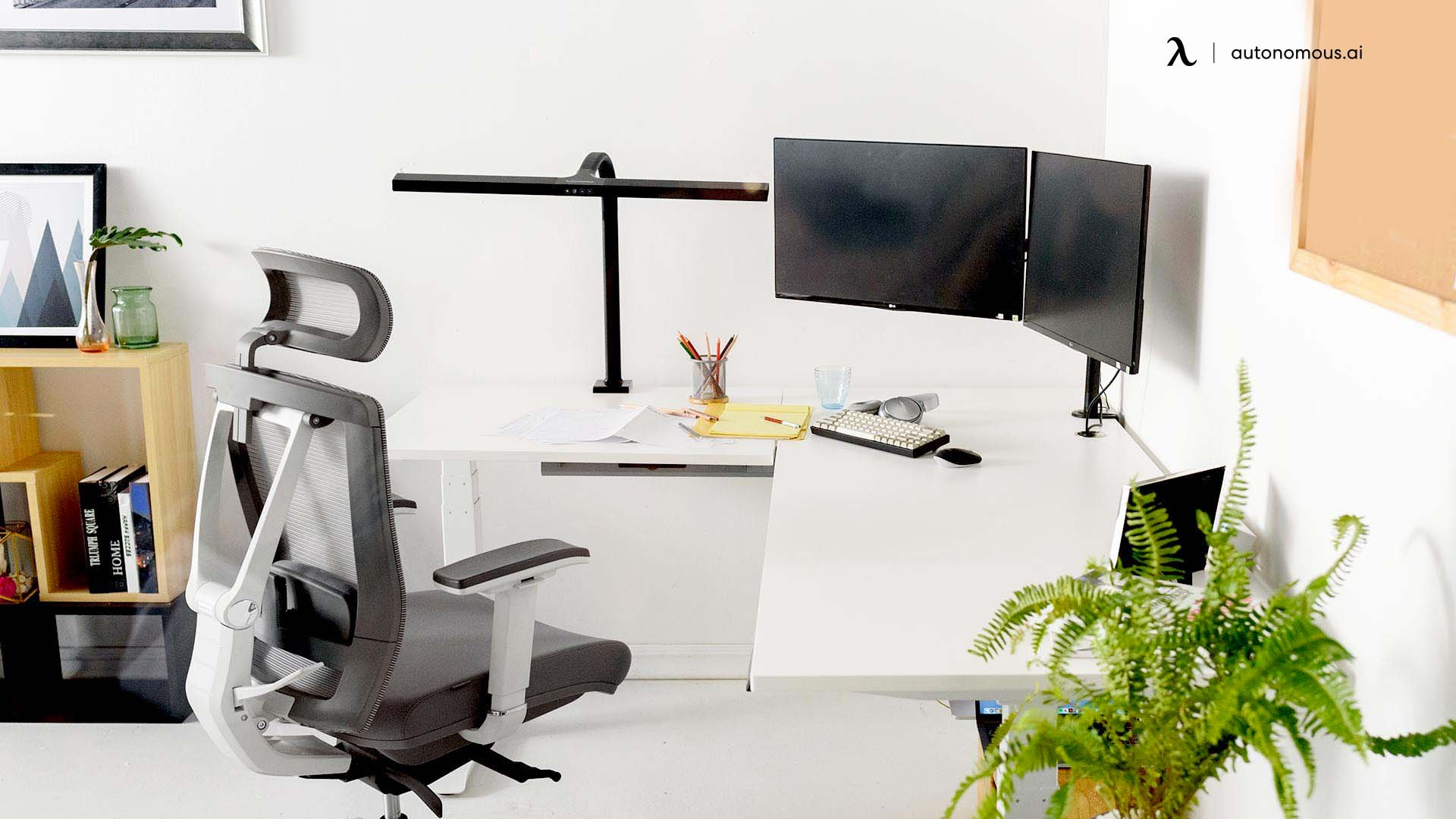 If you've ever thought about having a couch in your office space, then this may be the small home office layout for you. Your L-shaped desk would bear some placement similarities to the previous option. However, there are two differences.

Instead of one component of the “L” being somewhat in the center of the room, the whole arrangement would be placed against the wall, so you would be facing the wall instead of facing the opposite side of the room.

There would also not necessarily be any value in putting the two chairs from the previous option behind you. Instead, you can put your couch against the wall opposite the entryway, which allows for relaxation when the time comes. 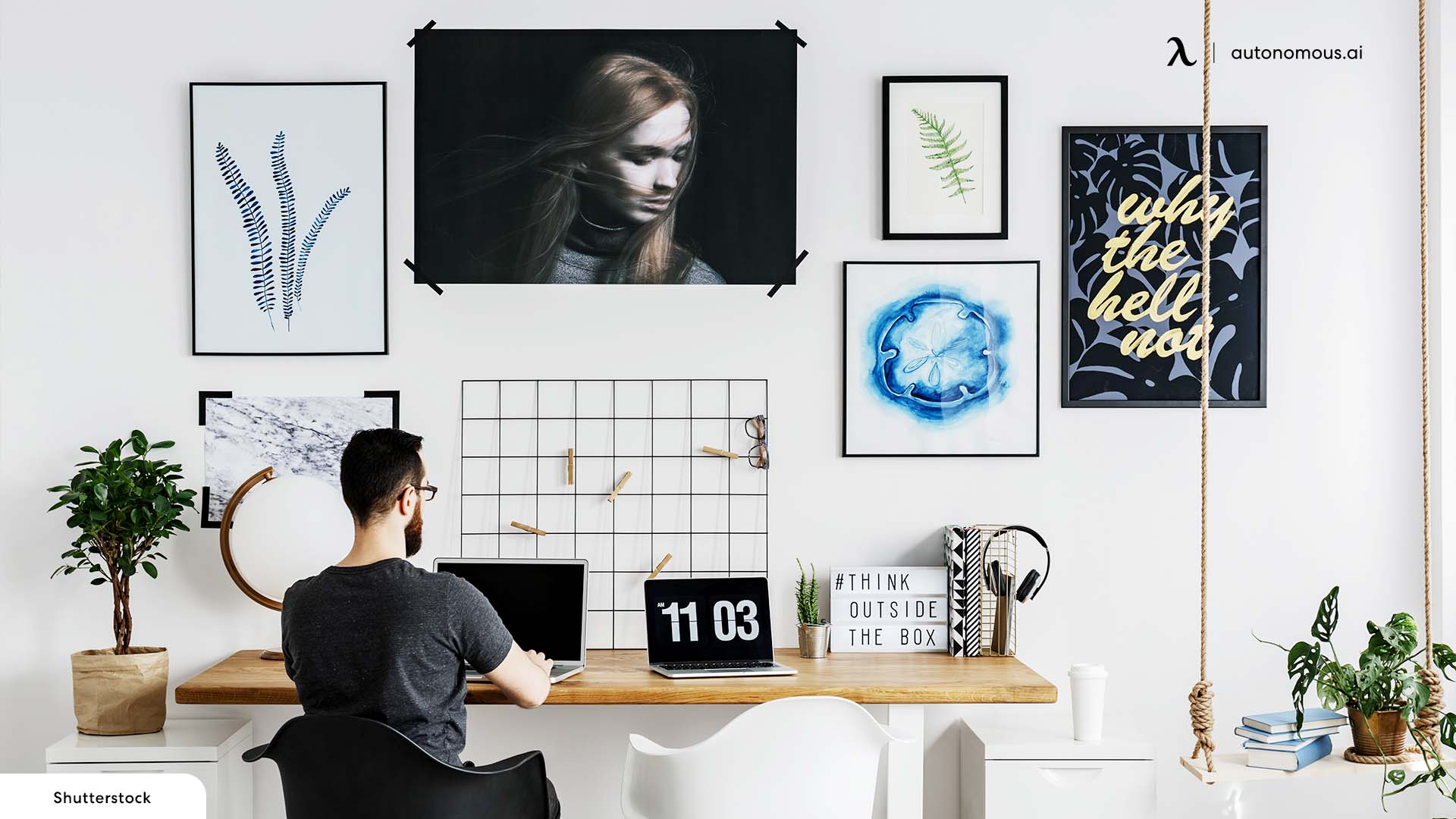 This is yet another small home office layout that brings the benefits of an additional workspace with it. This time, the desk that is used for the extra workspace would be placed along the wall opposite the opening.

Your main desk, which in this case could be a Happen Pillar desk, would be placed in a parallel configuration to the extra workspace. Your chair, therefore, would be between the two, and you would alternate your position by reversing your chair’s alignment.

You are then free to put your bookshelves along one of the walls to your sides. It's advised to place the bookshelf along the side that is closer to the opening.

That's because you want to use the other wall for the placement of a chair that faces you diagonally and probably a small round table.

Some people are not huge fans of small home office layouts that have them staring at walls, so this one allows you to stare into the center of the room, and it should create a way more comfortable experience. 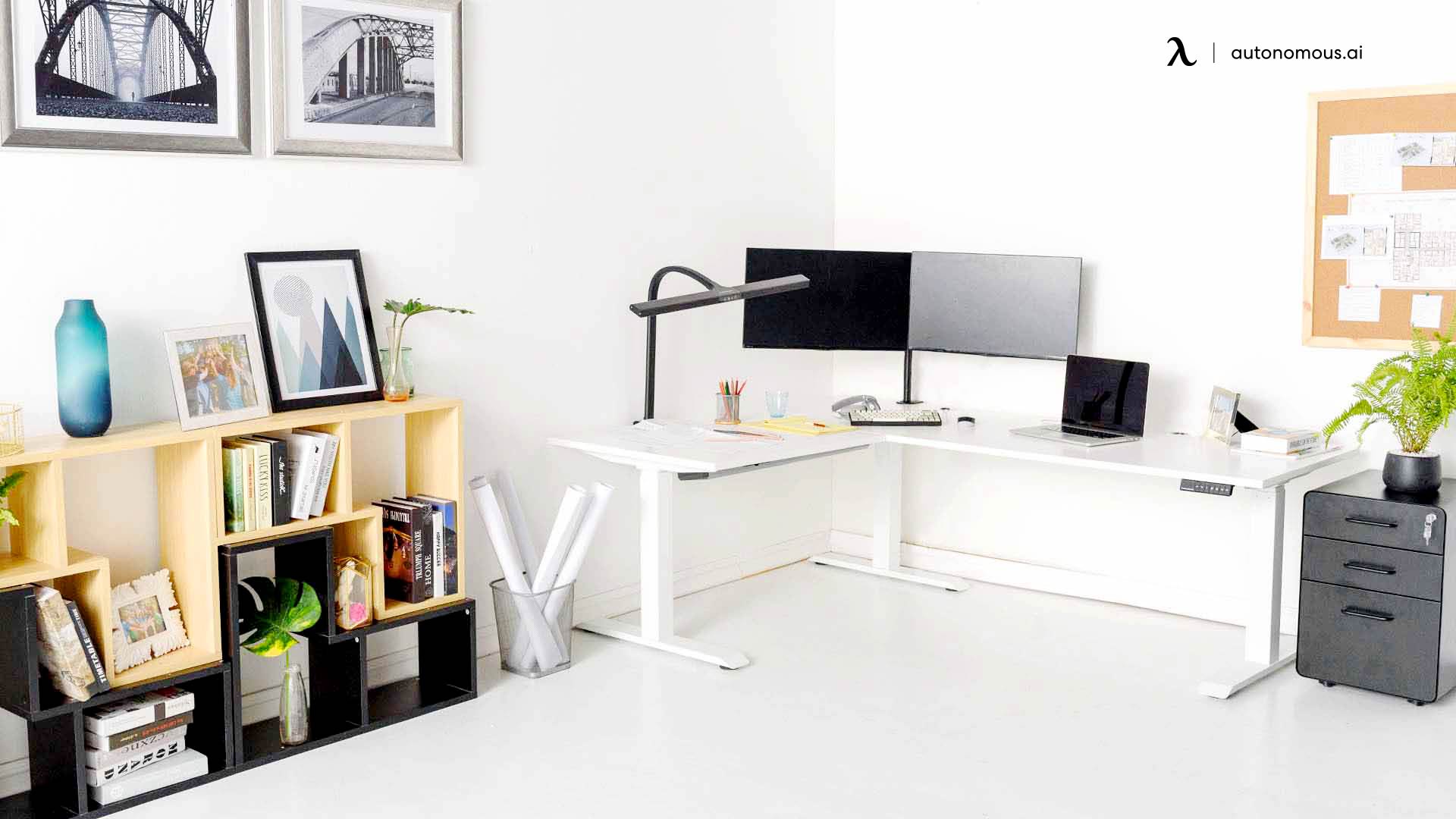 The last L-shaped desk setup had you facing the wall, but this one allows you to face into the room. Choose the corner furthest from the opening that leads into the office space. You would align your L-shaped desk in that corner such that one side of the “L” runs partially through the room instead of both sides of it touching the wall. 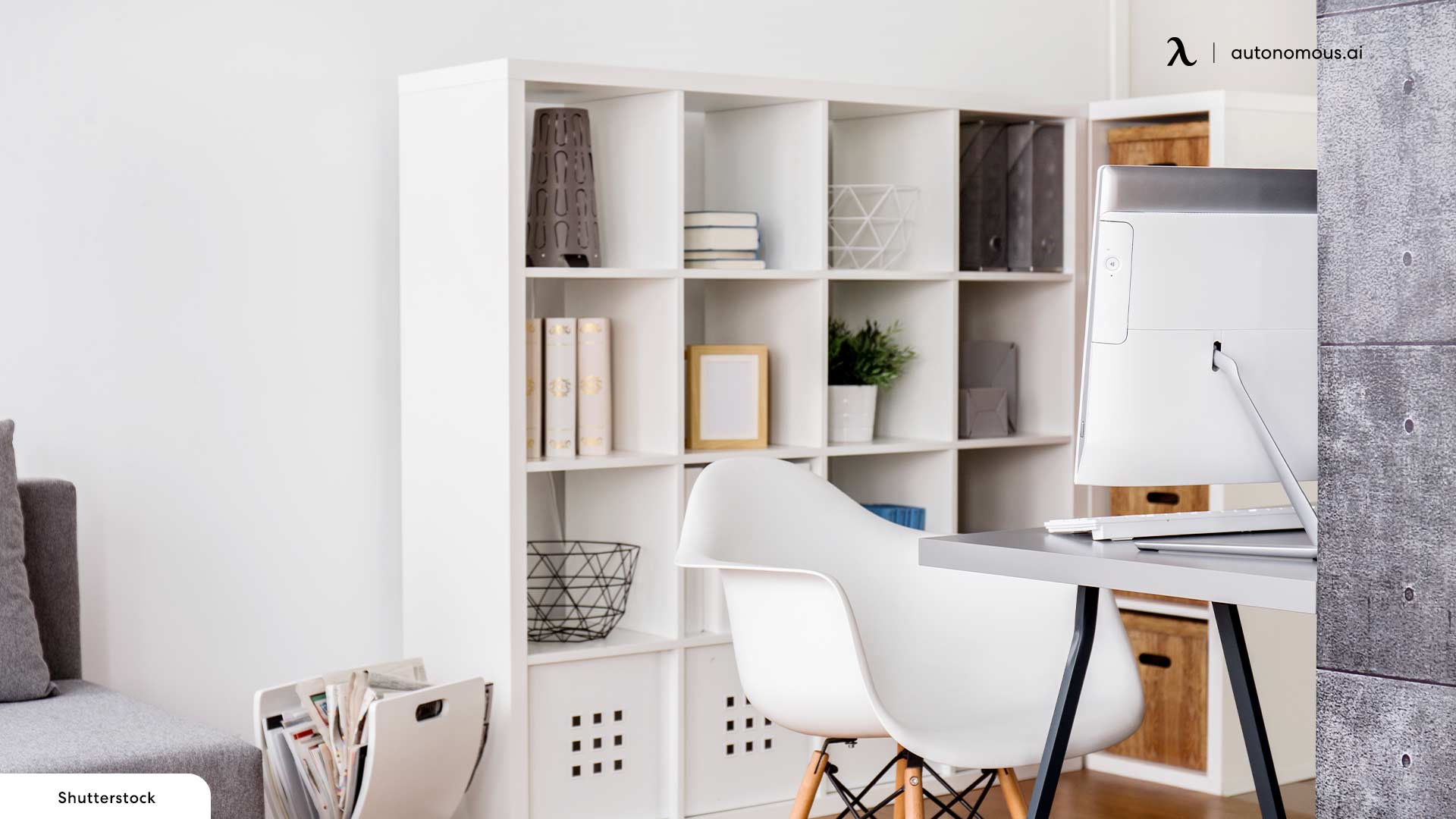 The main idea here is that this is a library and an office in equal measure. Therefore, all the walls in the room except the one your back faces would be lined with bookshelves.

The back of your chair would be facing the empty wall, with your desk in front of it, meaning you get to face into the room with this layout.

There would be a small round table flanked by two chairs that diagonally face you.

If done correctly, anyone staring into the entrance to the room from outside would likely be able to see the two chairs and the rounded table. 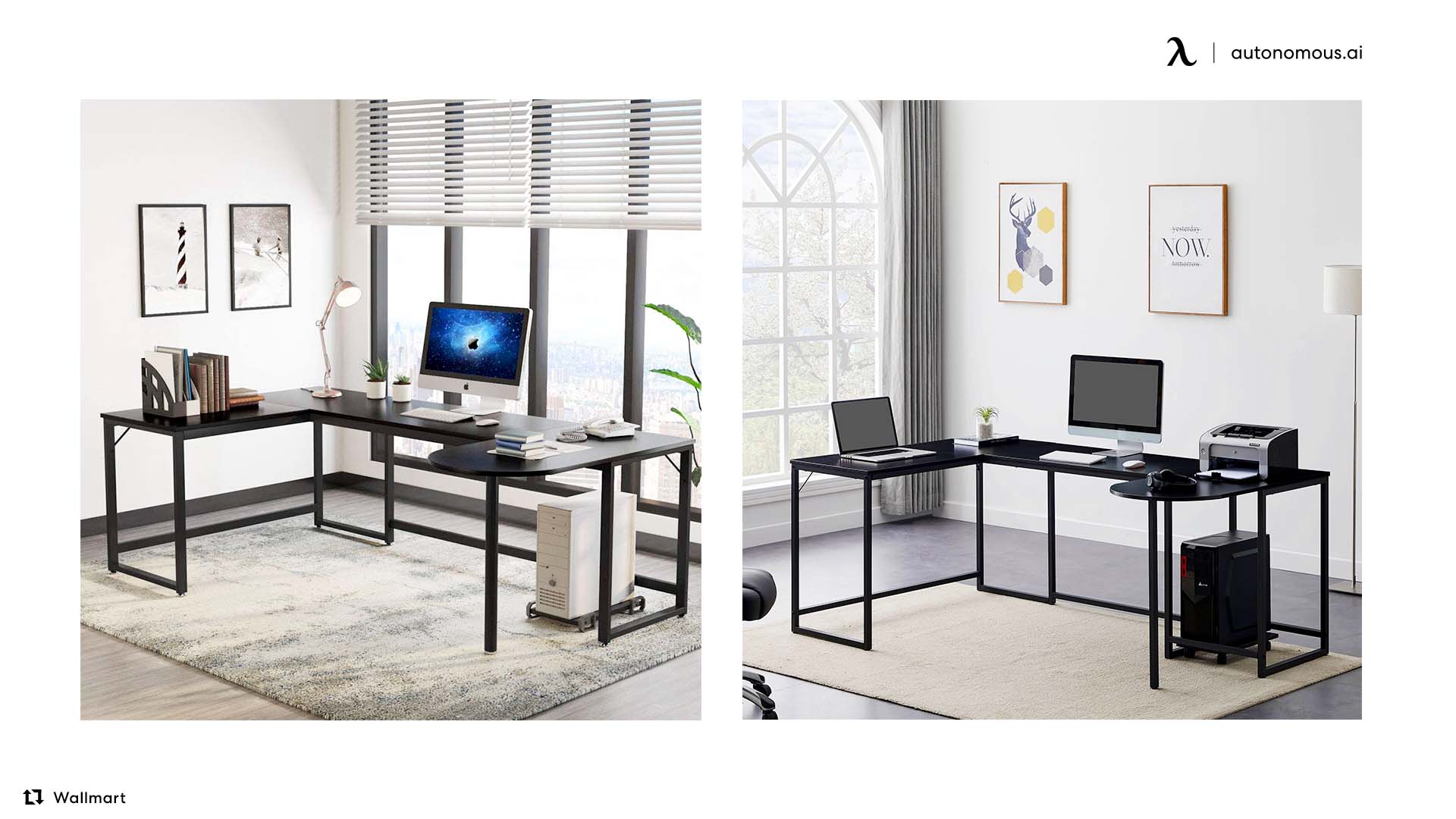 The final small home office layout on the list caters to those who may need a bit of extra workspace, particularly if the design is meant to be conducive to two persons working in one area.

The idea would be to create a rectangular-shaped “U” using three desks. So, two desks would be pushed against opposite corners, running parallel to each other. The gap between them would then be filled with a third desk angled perpendicular to both the previous desks.

Then, the default placement of the two office chairs would be back-to-back as they would be facing the initial desks.

For relaxing space or additional guests to the office, there could be a small round table flanked by diagonally placed chairs that directly face the third desk.

Your bookshelf could then go behind these two chairs and the round table.

Having read all of that, how do you feel about your small home office floor plan now? It's essential to ensure that you have the design down to a science. That's the only way it's going to be efficient and contribute to the levels of productivity that you need to make working from home feasible.

Remember though that it's not all about the layout. The furniture that makes up a part of the equation is also a big part of the puzzle. Substandard facilities lead to substandard productivity. It can be quite tempting to get the cheapest and modern office furniture and accessories, but why would you want to limit both functionality and longevity?