The gaming industry remains one of the largest in the world, and that likely isn't changing anytime soon. Similarly, PC players continue to be able to enjoy a better experience than their console counterparts, considering the additional power and customization available. To this end, a prebuilt PC with a 3060 card may be desirable.

Unfortunately, the PC community has a way of frowning upon those who choose to go the prebuilt route, as custom-building enthusiasts will likely tell you that the best way to get bang for your buck is to build it yourself.

It's not impossible to build a tremendous 3060 PC yourself, but it's just as easy for you to mess things up and compromise a huge part of your budget. Who is the information here meant for and what can you hope to gain from it?

Well, it's all about the video game player and streamer community today. An RTX 3060 Ti PC can become a huge part of your gaming aesthetic, but it does depend on your ability to consider the right factors and choose the right one.

Prepare yourself to learn more about the prebuilt side of the fence, and why going that route may be incredibly beneficial for you. Additionally, you get to see some tremendous 3060 Ti prebuilt options.

Why don't you build your gaming furniture, for example? You may know that you want a gaming L-shaped desk, but building it may not seem so feasible, especially since you may not have the required experience.

Nevertheless, you could give it a try. Who knows? Maybe there are even some gaming desk ideas that you can use to put the finishing touches on the visual you hope to create. For example, a minimal gaming setup may be desirable to you, and you could certainly attempt to build your desk and try to put one together.

Still, if you were to buy a prebuilt desk instead, there are several guarantees that you can get in doing so. Of course, an RTX 3060 Ti gaming PC and a desk are two different things, but the principles can certainly carry over quite well. 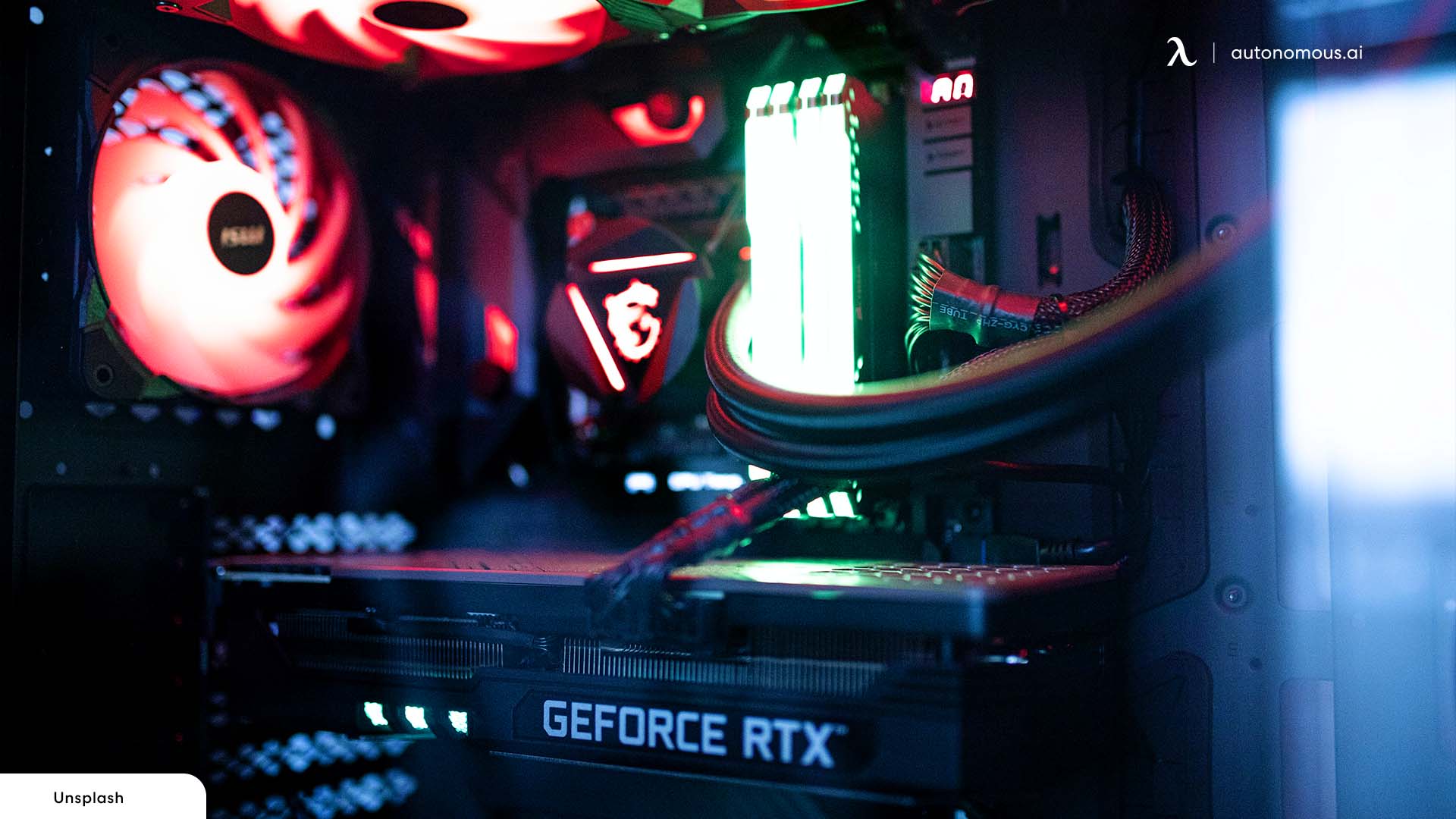 Convenience is probably one of the most obvious reasons that you would choose to buy a prebuilt PC with a 3060 card. Everything is already done for you, presumably by someone or some people who have a host of experience with PC building.

What sounds like an easier experience to you? Is it hunting down the various components of the PC and putting them together yourself, knowing that you could potentially risk frying everything with static electricity? Alternatively, does it sound better to be able to walk into a store and pick up the finished product or order it online for delivery to your doorstep?

Of course, the latter sounds way more convenient to do. It takes a lot of the hassle and work out of your hands and puts it in the capable ones of industry professionals.

The electronic landscape in 2022 feeds even more into this convenience conversation, considering the shortage caused by the current state of the world's supply chain. It's way more likely that the companies putting prebuilt designs together have greater access to the most optimal parts. 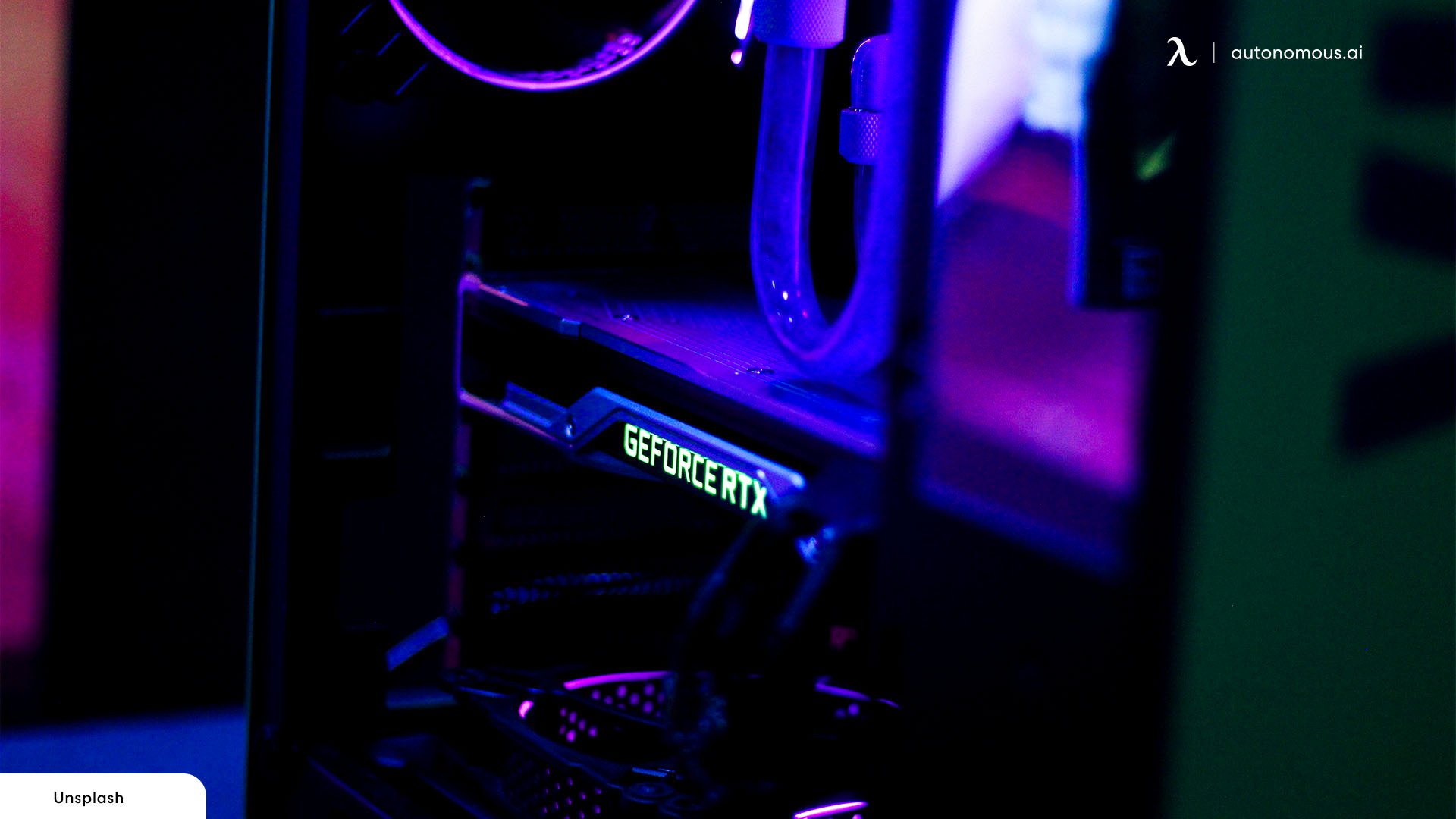 Performance is another huge consideration here. There is no doubt about the fact that you are always going to want a PC that does its job incredibly well. Not because the parts in an RTX 3060 Ti PC fit into the required slots, it means that they are going to perform well.

Sometimes, people put a host of great parts into their custom-built PCs, but they do not necessarily get the best performance out of them. This could be due to simple BIOS settings, or even just component placement that restricts airflow.

You'd be surprised to know just how many inefficiencies that are out there can easily plague your designs. A prebuilt PC with a 3060 card is highly unlikely to present any of these performance shortcomings, purely due to the experience of those who are designing the units. 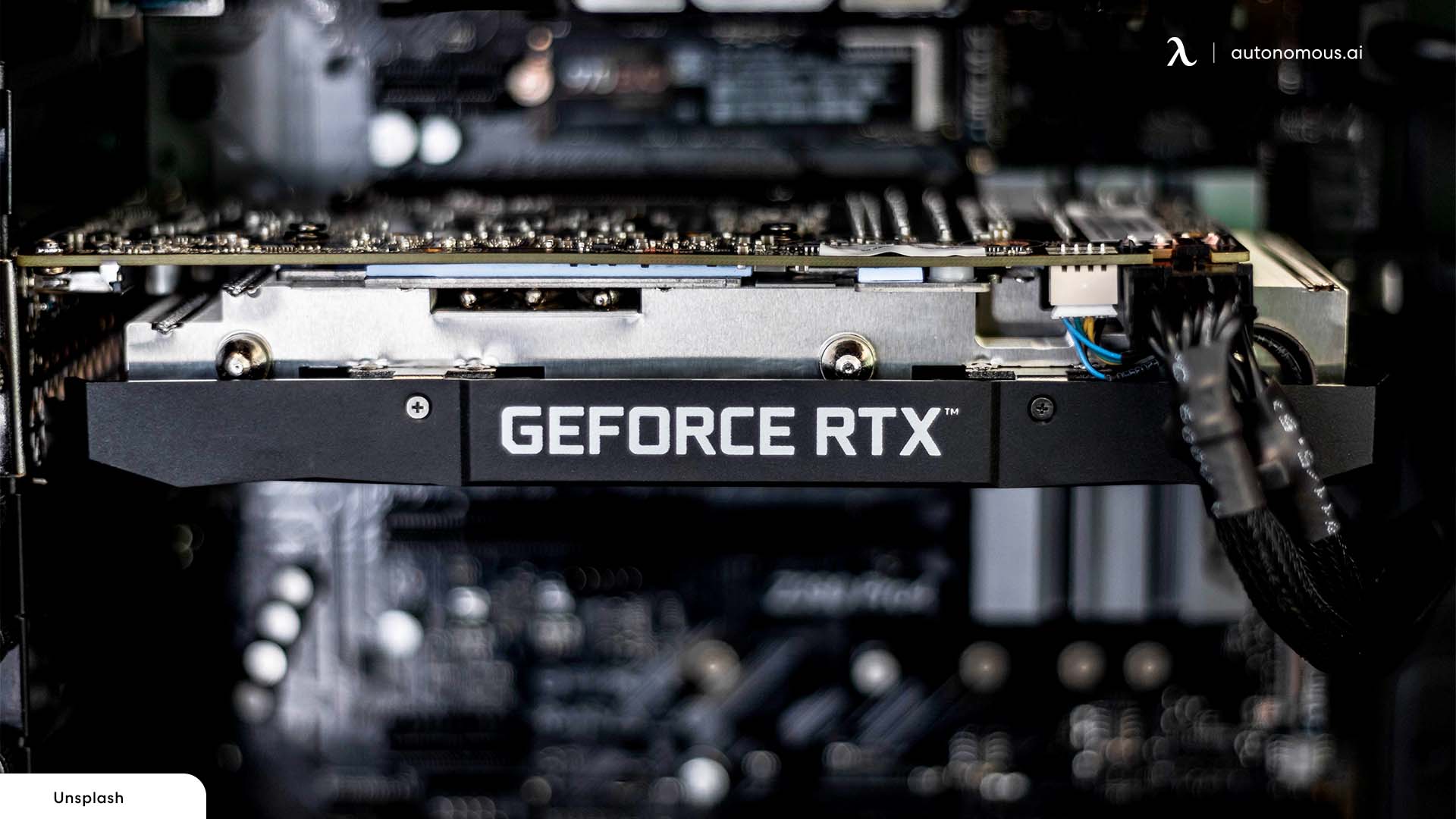 Finally, there is the matter of compatibility, which is a little bit on the self-explanatory side of the spectrum. There are essentially eight major components that make up any prebuilt PC with a 3060 card. If you were to go the custom route, these are the parts that you would be buying to bring your system unit together.

These are the case, storage, memory, power supply, motherboard, CPU, cooler, and graphics card. You may or may not be aware that there is a compatibility matrix for these parts. For example, the CPU that you purchase must be supported by the architecture of the motherboard.

Some areas of compatibility, while required, are a little less technical and a little less obvious. For example, it's not uncommon for people to buy CPU coolers and heat sinks that present clearance issues because of other components, such as the graphics cards, or the fact that the case purchased isn't large enough to accommodate everything.

Yes, you may say that websites, such as PC Part Picker, are out there that can help to a great degree with these kinds of compatibility concerns. While you would not necessarily be wrong in saying so, it's well documented that these sites are not 100% accurate.

A 3060 Ti prebuilt unit is going to have all the compatibility issues taken care of for you. You can rest assured that you are getting a build where there are no clearance challenges, and everything simply works together.

Even if there happens to be a damaged component out of the box, the warranty you get allows you to either swap the whole unit for a new one or have the faulty component changed free of charge.

It's well known in the PC building community that if builders damage PC components while putting pieces together, getting a replacement for the damaged part is a hit or miss.

Now that you should be convinced though why you want to go prebuilt, you may be wondering which prebuilt PC with a 3060 card you are supposed to buy and why. Well, it just so happens that you've come to the part where you get to see some of the best such options on the market today. 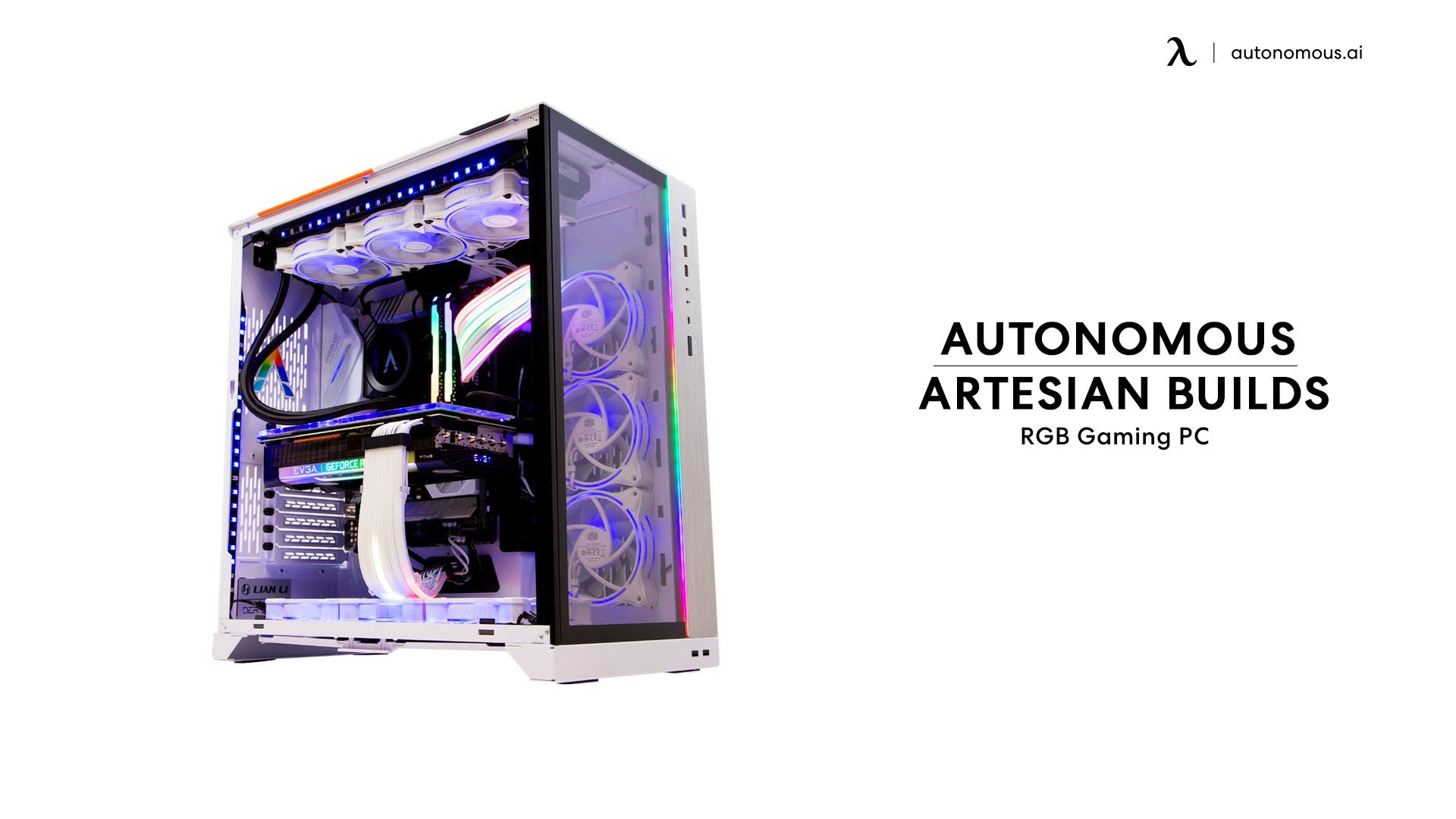 Kicking things off is undoubtedly one of the greatest and most powerful pre-built PCs with a 3060 card that you can get your hands on. It looks great, should fit into just about any gaming room, and is ready to handle current and future AAA titles with the greatest of ease.

Of course, this is none other than the Artesian Builds PC. The construction is incredibly sturdy, and you can see the space optimization with the internal component layout. The presence of tempered glass front and side panels brings that luxurious look to your gaming setup, which is sought after by many PC enthusiasts.

It's always good to see when a desktop is built Wi-Fi capable. Of course, you are most likely going to be using a LAN cable, especially if you have any plans on playing games online. Nevertheless, it's nice to have the option, especially if there are any cable or port challenges in the future.

Within your case, which you can make black or white, by the way, is a collection of high-tier components. First, there is a 10th generation Intel i7 CPU, with enough cores and threads to make streaming even the most demanding games no inconvenience at all.

A high tier ASUS TUF gaming Z590 is housing this CPU, and it's complemented by 32 GB of DDR4 ram running at 3,200 MHz. Your graphics card is of course an NVIDIA RTX 3060, and your storage drive is a 1 TB M.2 PCI E 3.0 NVME SSD. Cooling is provided by a Deepcool or Corsair RGB cooler, and six RGB fans help to maintain airflow while providing a tremendous aesthetic.

All this is powered by a 750W 80+ Gold fully modular power supply. Of course, the PC must be running the latest operating system. So, you are getting Windows 11 Pro out of the box.

With that kind of resume, there is not much more that needs to be said. 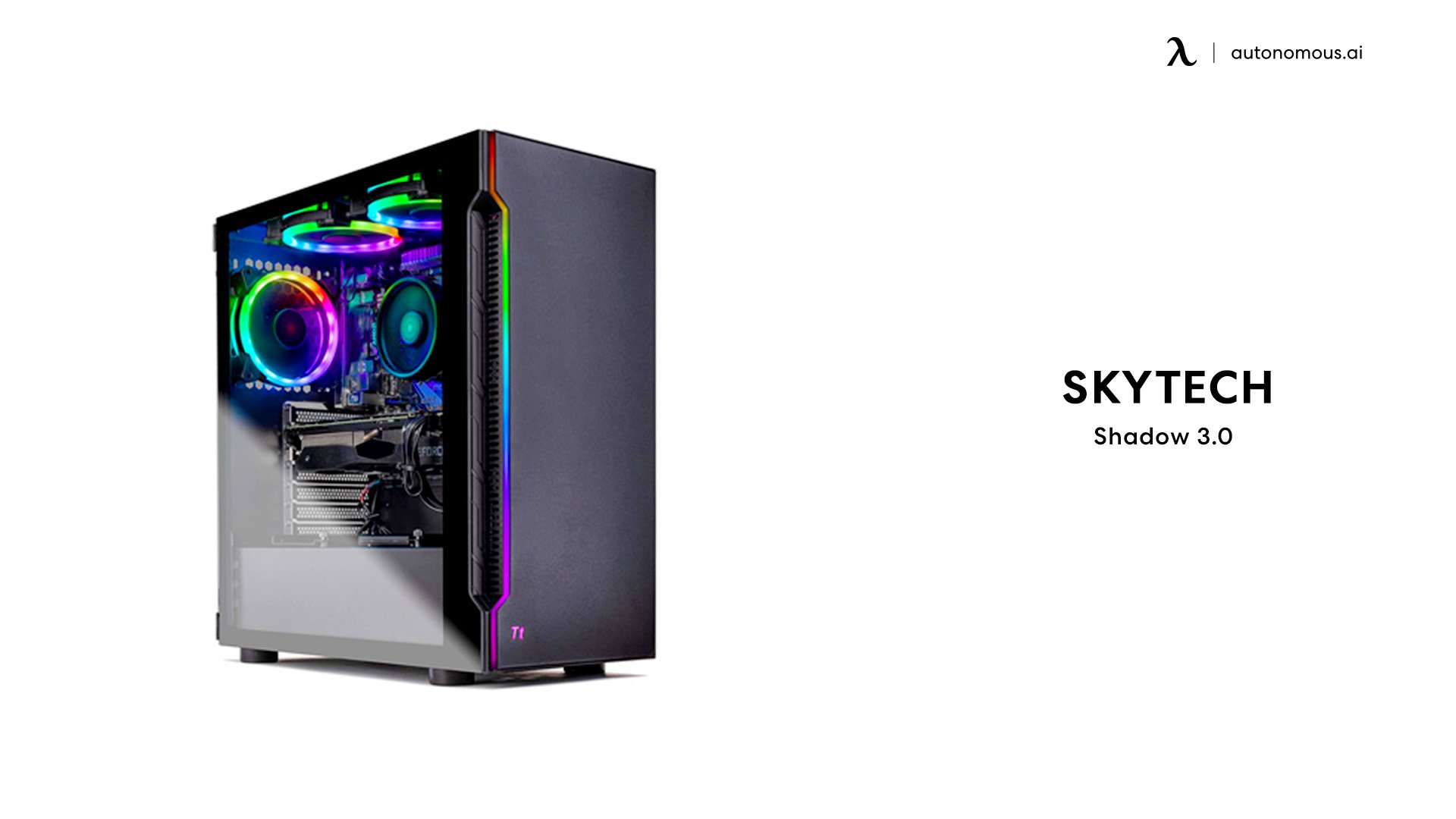 Another solid choice is the Skytech Shadow 3.0 gaming PC. AMD Ryzen has certainly made a case for itself in the gaming PC market, and this 3060 Ti prebuilt design is a big part of the said case. Typically, Skytech tends to use the AMD chipset, so there is no surprise here.

Again, it's another sleek-looking design, with RGB components to reinforce that look gamers tend to go for. First, you're getting a Ryzen 5 3600 processor, with 12 threads and 4.2 GHz of boost frequency.

As far as operating systems go, you may want to consider a bit of an upgrade, since this design ships with Windows 10 Home. While home OS versions are typically suitable for single users, you do compromise on certain features by not having a pro model.

Additionally, while Windows 10 is going to continue being supported throughout 2022, it may be a good idea to opt for an upgrade, especially since it's still free at this point. 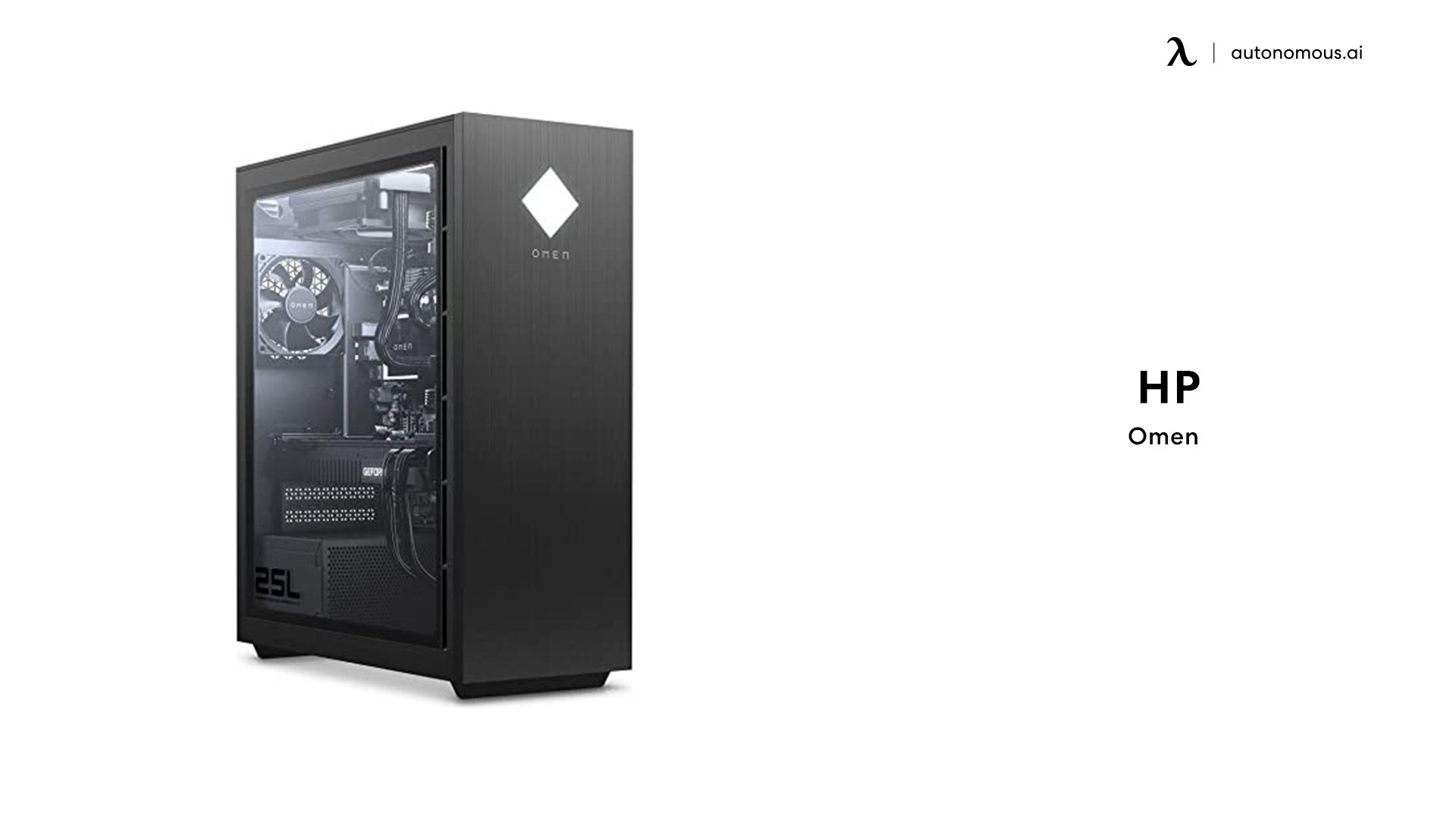 Even if you've never used a PC that is specifically optimized for aesthetic gaming setup, you likely have heard of HP in the standard PC market. Considering HP has even thrown its hat into the server industry, it's no surprise that there are a couple of gaming designs under its belt.

Here, you have the HP Omen, which is powered by an eight-core AMD Ryzen 7 processor. As you'd expect, you are getting an NVIDIA RTX 3060 Ti GPU for your gaming needs. 16GB of ram is provided alongside a 1 TB SSD. Like the previous option, the OS you get is in the Windows 10 line, so make sure you take advantage of the free upgrade to correct that.

Note that there is no RGB lighting here, so if that is an important factor to you, then you may want to start looking elsewhere. 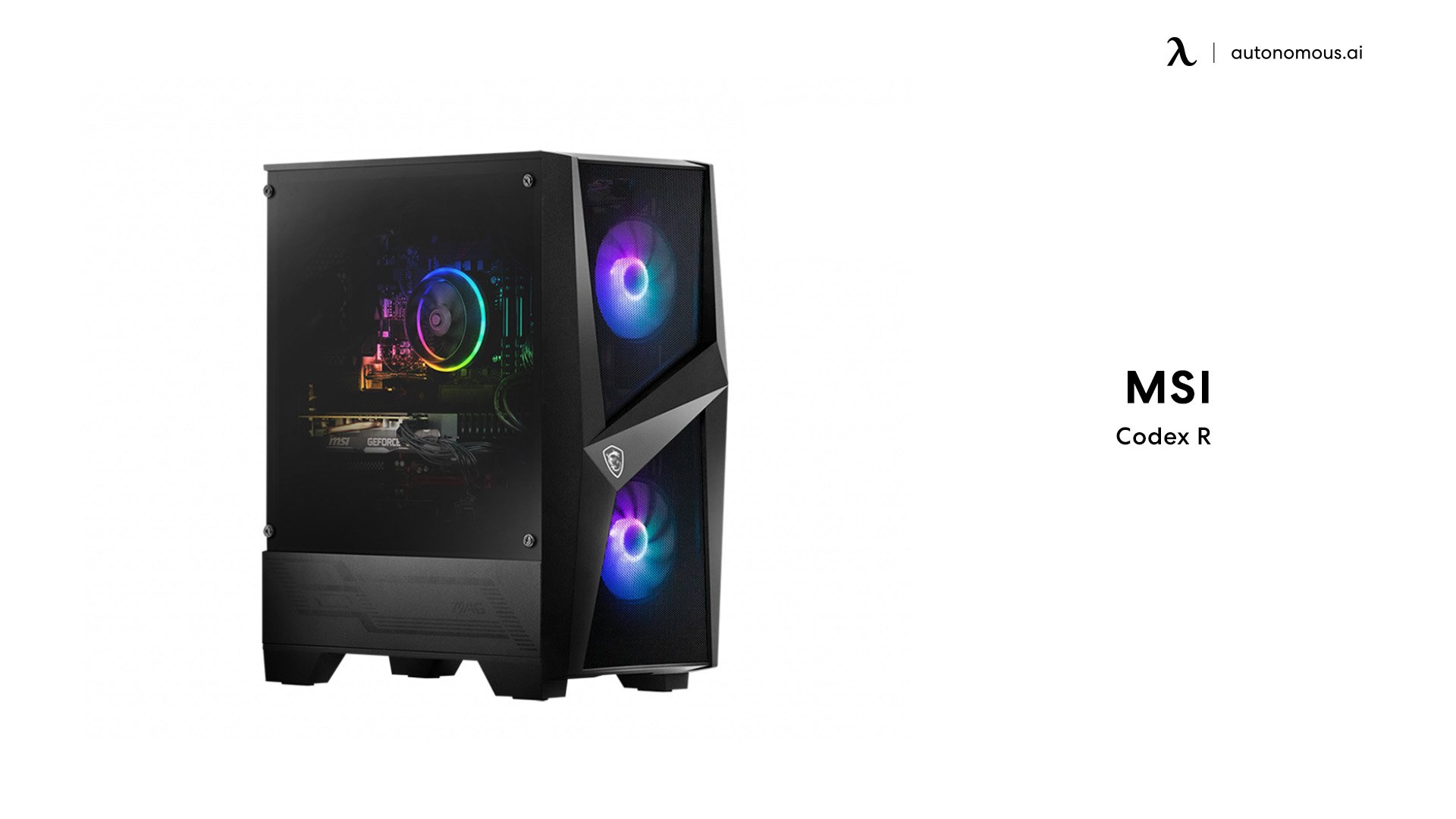 If you were to ever hunt down parts to build a custom PC, many of them would likely bear the MSI brand name, especially where motherboards and monitors are concerned. The manufacturer is also known for a couple of top-tier gaming laptop designs, so there is no surprise that you are getting a solid gaming PC here.

The aesthetic that the case provides is incredibly fancy, and it is enhanced by the internal RGB components. A 10th generation Intel Core i5 processor is present, and it's complemented by an NVIDIA RTX 3060 Ti card.

Your memory configuration provides 16 GB, and a 512 GB SSD is also provided as your storage drive. The prebuilt PC with a 3060 card happens to be Wi-Fi capable and runs Windows 10 Home. Again, opt for a windows 11 upgrade as soon as possible to correct this.

Certainly, there was a lot of information to take in here, which gives you an idea of why it may be an excellent choice for you to opt for a prebuilt PC with a 3060 card. PC enthusiasts often recommend going the custom-building route and may even look down on those who choose to buy something that's already put together.

However, the convenience, performance, and compatibility concerns highlighted above come together to tell the tale of why you are doing yourself a huge favor by ensuring your RTX 3060 Ti PC is put together by professionals. Of course, there is also the guarantee that comes with the warranty you get from reputable prebuilt PC vendors.

It would be a huge injustice not to mention the fact that you even got to see the best 3060 Ti prebuilt options on the market today. There is no doubt that you are going to be able to make an excellent choice in snagging a PC for your gaming or streaming needs.