Are Standing Desks Good for You? Explanation & More

Are standing desks good for you? By the time you're finished reading, that question should be answered on several different levels.

Certainly, in the context of today's office space, it’s very common to see workers hunched over in all sorts of uncomfortable positions. This directly feeds into the number of employees suffering from chronic back pain.

While persons often think about desk setup ideas, desk decor, chair designs, etc., the same kind of thought is not often put into the extent to which having a proper desk can lead to a more pain-free existence.

The benefits of standing desk use have been well documented, but finding the information often requires visiting several sources. Instead, you can browse the collected insights below for a comprehensive view of the matter.

Why Standing Desks Are Beneficial Anyone who appears to be on the “standing desk train” is likely to sing the various praises of these pieces of furniture, and they may even attempt to convince you to purchase one.

However, the last thing you want as you contemplate buying a traditional office or work from home desk is to do so on a whim based on blind loyalty to a product.

That's not what's being offered here. Instead, the idea is to give you a balanced perspective, especially for someone trying to objectively weigh the benefits of standing desk use.

With that said, it's time to turn your attention to three of the major areas in which one of these units can contribute to your quality of life as you work. It's a good idea here to think about what the biggest orthopedic challenges are in the office without standing desk ergonomics in the mix.

Well, you may hear about lower back pain, neck strain, posture challenges, etc. These are all fair points to bring up when thinking about the negative effects that sitting consistently has on the human body.

After all, it is often said that sitting is the new smoking. Truth be told, research does not indicate that the choice of either a traditional or a modern home office desk has any bearing on orthopedic benefits.

This makes sense, considering that a desk itself is not enough to offer any significant change. A big part of the question is what is the user doing with the desk?

Provided that you take advantage of the standing desk height and its other features effectively, only then do you start to derive the benefits.

For example, you may find that you are no longer hunching as you acclimate yourself to being in the position that a standing desk that's appropriate for your height puts you in.

Similarly, the neck strain and chronic back challenges associated with being seated for long hours on end should also be factored into the matter here. Obesity is undoubtedly one of the biggest challenges facing the population today, and it comes with a host of long-term health risks. So, the question is, are standing desks worth it for people who may be trying to combat obesity?

Well, it's certainly better than buying a sitting desk. Technically speaking, your body is usually burning a set number of calories, even if the said number happens to be extremely low.

Therefore, even as you sit, this process is taking place. When you stand, however, that number increases. What is important to note is that the increase is not so significant that it's enough to turn your life around in the absence of proper exercise.

However, it does make sense that you'd want to go for the thing that gives you an advantage, even if the scale of that benefit is not especially large. When you remain in a seated position for a very long time, it's not beyond the realm of possibility for you to find yourself often feeling sluggish. After all, it’s what you gave your mental state to work with.

If you ask anybody who actively maintains an exercise regimen, you may notice that these people seem to have more energy on average than their counterparts.

For whatever reason, there is often a belief that so much energy is expended during a workout that nothing is left. However, by improving cardiovascular health, muscular endurance, stamina, etc., you find that these individuals have a greater energy store.

Similarly, provided that you're not going to be in the same sitting position that's contributing to a lack of energy, introducing a standing desk into the environment can help you feel more revitalized than usual.

Is Standing Better Than Sitting in the Office? So, after discussing how standing desks help, it's probably a good idea to definitively state whether standing is better than sitting in the office.

The short answer to that is not necessarily. This may be a surprising revelation, especially since you were likely under the impression that you were going to be outrightly told that a standing desk is better than a traditional sitting one.

Well, yes, the standing desk itself is certainly better than the sitting desk, because of the potential it has. However, that's not the question being answered right now. This is a comparison between the acts of sitting and standing.

Sitting has its fair share of challenges, but so does standing. If you stand for the entire workday, it may be uncomfortable, you may end up dealing with joint pain, and there are other issues to consider.

Well, the human body is made for movement instead of either standing or sitting for long periods. Therefore, what you want to do is incorporate more movement into your daily routine.

This is where you want to start thinking about getting your hands on an adjustable standing desk. Such a desk can alternate between seated and standing positions at will.

That way, you get to capitalize on sit-stand sessions and move between each position at regular intervals. When done effectively, you get to take advantage of the best parts of both sitting and standing without committing to either or a long enough time that the drawbacks start to become a problem.

How to Move Around Optimally Now that you know that the idea of regular movement is what you want to achieve, what are some of the best ways to ensure that you’re getting enough of it into your routine?

You can't just be taking breaks from your work every two seconds. Most offices feature official lunchtimes for their staff members, and there may even be the idea of a coffee break.

Even when you're working from home, it probably wouldn't be the most productive thing in the world to always be taking breaks at inopportune times. However, micro brakes can slot into your workday very easily.

During these, the intention is to stand, stretch a bit, and take a couple of steps around to keep your blood circulating well.

As you get lost in your work, doing this may not be the easiest thing in the world, so it may help to set an alarm on your phone or elsewhere to remind you whenever it's time to take one of these small breathers You can't launch yourself into a full-on workout at your office desk. Even if you see where the desk can provide you with a proper space to get some exercises in, you are likely going to be hampering your productivity to put that kind of focus into a workout routine.

Instead, you want to simply do a couple of simple desk exercises from time to time. You don't want to make yourself too tired for the rest of the workday and you don't want to be sweating profusely and making yourself uncomfortable.

Hitting a few desk push-ups or some slow and controlled chair and squats shouldn't put too much of a burden on you.

Moving Away for Lunch Some workers have a terrible habit of getting completely absorbed in the work they do. There is nothing wrong with being dedicated to your cause, but there's also such a thing as overdoing it.

Your lunchtime is meant for you to eat, unwind, and mentally prepare yourself to jump back into the swing of things with your job.

Therefore, it's a very good idea to get away from your workstation when your lunchtime comes around. Remember that you're a person before you are a worker, so don't turn yourself into a drone and allow life to pass you by.

When it's lunchtime, put your computer to sleep or lock it and go somewhere else. This applies even if you are working from home.

You can head to one of the other rooms in your house or lay down for a bit and watch one of your favorite TV shows until it's time to head back to the office space. These were briefly mentioned before when the idea of adjustable standing desks was brought to the fore. As indicated, these kinds of desks allow you to alternate between standing and seated heights.

Many of them even feature memory presets, which means that whenever you find a height that suits you well, you can store it in one of the desk’s memory slots, allowing you to return to that height at will.

Note that the said slots are typically finite, and you don't often get between more than two or four. Therefore, it's a good idea to think long and hard about the heights that you are choosing to store in the memory bank.

All you need to do is set an alarm for when it's time to change position. Once the alarm goes off, transition to a standing position if you are seated and vice versa.

Should You Buy a Standing Desk? So, now you're back to this question. Should you buy a standing desk, or does it make sense to get one of the traditional sitting ones instead? Well, based on all the information you've seen so far, you cannot take advantage of the standing desk benefits if you're using a traditional table.

On the flip side, if you've purchased an adjustable standing desk, you can certainly take advantage of the benefits that a sitting desk would give you since you can reach a seated height at will.

With that said, the answer is very simple. You do indeed want to buy yourself an adjustable standing desk. Now, you may want a recommendation, and that's where the Autonomous SmartDesk Pro comes into the equation.

It features height adjustability between 26.2 inches and 52 inches. On the matter of the memory presets discussed above, you get four slots with this one. The electric dual motor used for adjustment is quiet and smooth.

You get a weight capacity of up to 310 pounds, which should be more than enough for your office equipment. You even get to choose between regular or extra-large tabletop options.

As far as composition goes, you're getting a solid steel frame as well as natural wood tops and classic finishes. 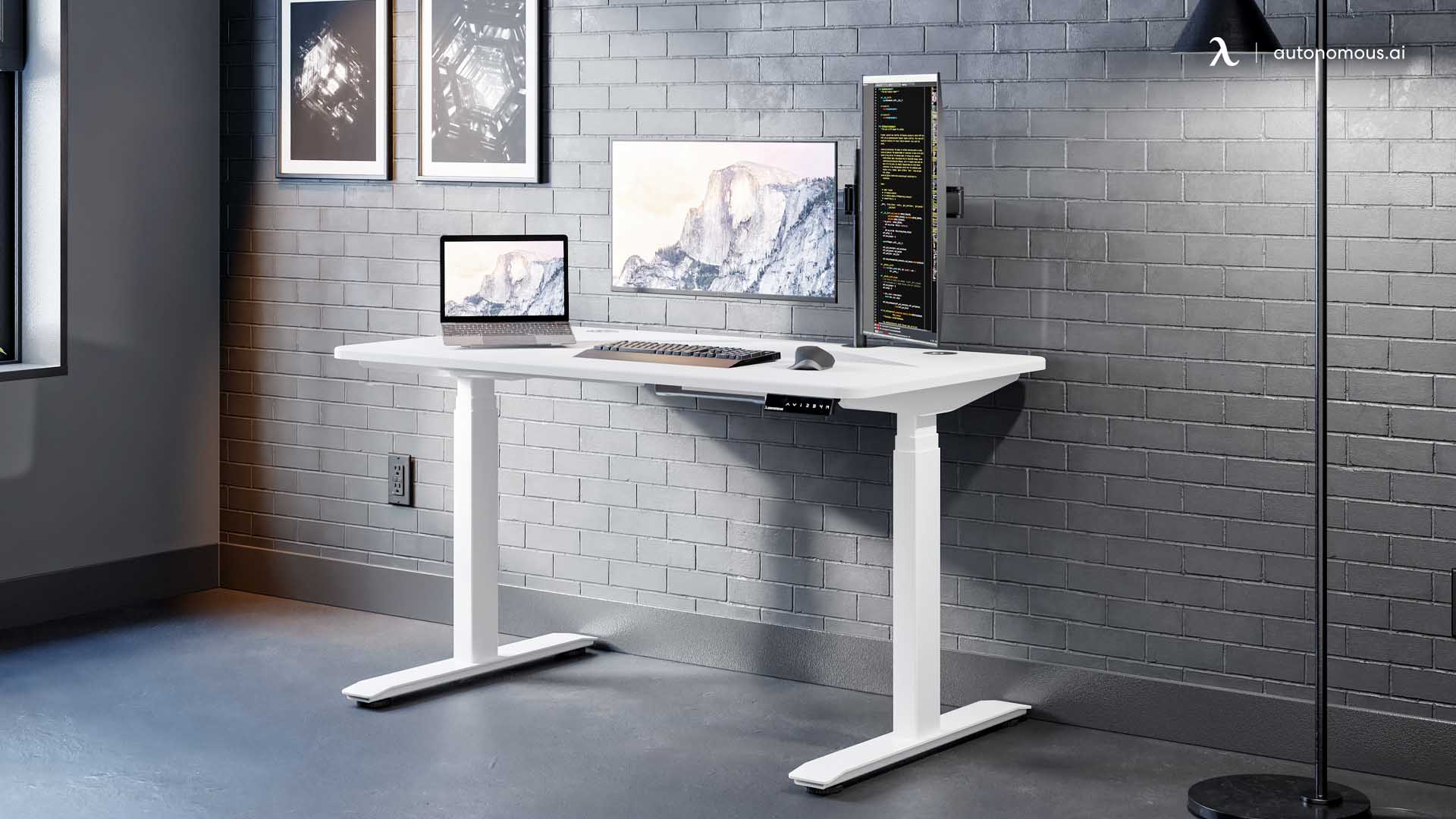 More range and more power. For those who do more.

Are standing desks good for you? Or do standing desks help? You have a lot to gain from choosing to go the route of purchasing an adjustable standing desk, and you now know that the Autonomous SmartDesk Pro is a solid model for you to get started with.

Neither a sitting desk nor a standing desk with no adjustment capability offers any significant benefit over the other. It stands to reason then that you’d want to take advantage of the best parts of both designs.