Case Study: How Do Standing Desks Affect Your Work Productivity?

We’re on record as saying that standing desks can benefit both your health and your productivity, but we also sell standing desks. It makes sense to question what we have to say, to rule out any inherent bias. So, to give you more information to chew on when making your decision, we’re presenting a series of anecdotes and case studies that reflect real-world usage of standing desks, and what effect they have on productivity.

First up, we have a study performed in 2015 and published in 2016. This study was performed by the Texas A&M University Health Science Center School of Public Health (what a mouthful), and the results can be found here. 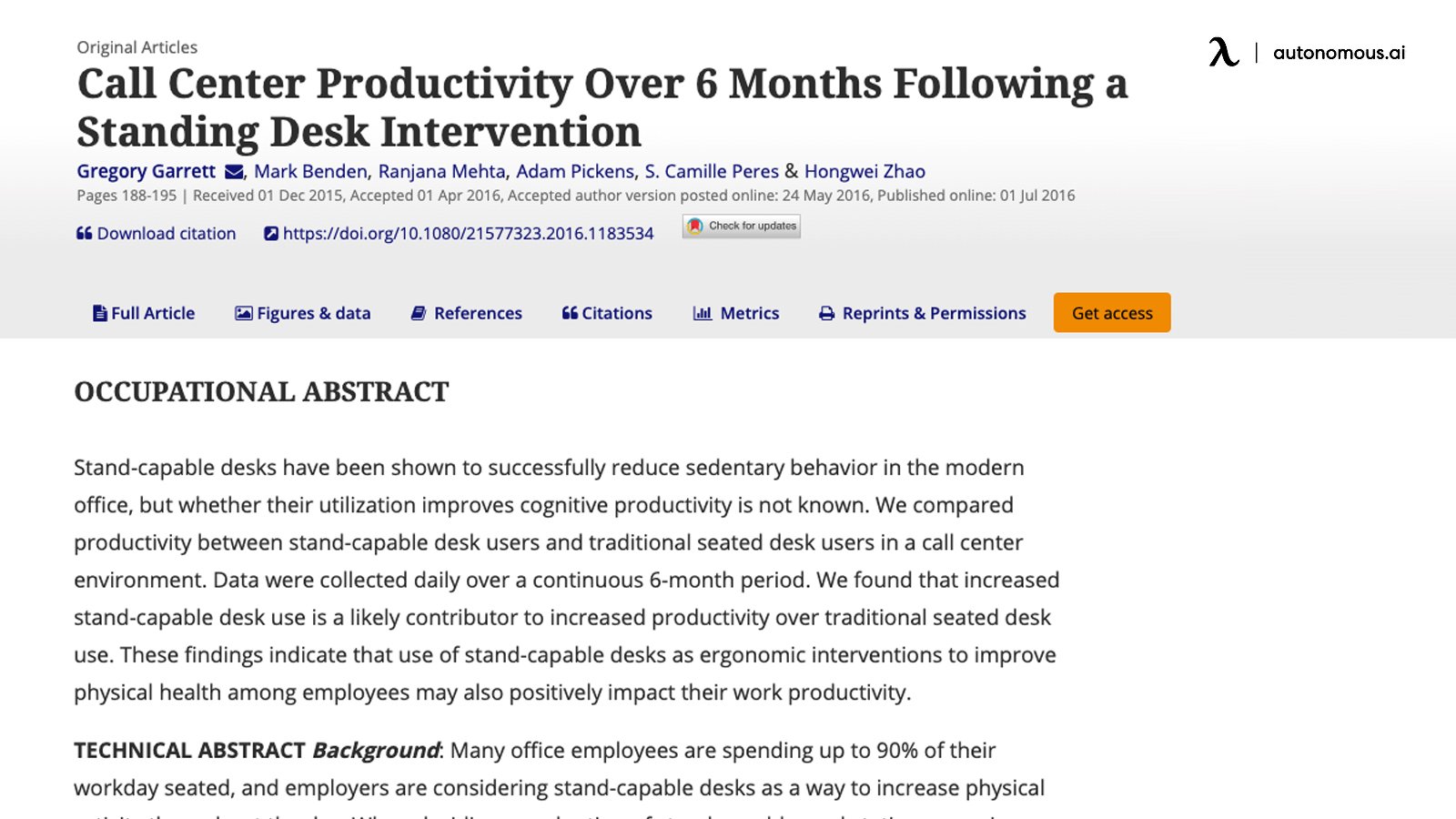 This study monitored 167 employees of a call center over six months, comparing employees using sitting desks and employees who shifted to standing desks. The results speak for themselves:

“Results: Users of stand-capable desks were ∼45% more productive each day compared to their seated counterparts. Further, the productivity of the stand-capable desk users significantly increased over time, from ∼23% in the 1st month to ∼53% over the next 6 months.”

One question you might have is “what is productivity?” In this case, in a call center environment, metrics are easy to measure. In this study, productivity was defined as the number of successful calls in an hour. Call centers are one of the most measured and most metric-defined jobs in the world, so it’s easy to define what can be considered productivity.

The study is clear; when standing to do a job that doesn’t require much physical activity, employee productivity increases. The exact reasons for this are unclear, but we can assume at least one thing. When your health improves, so too do mental and emotional factors like your ability to concentrate on a task, your critical thinking skills, and your ability to work without distraction.

The study ends on a note that they would like to perform further studies, taking other factors such as employee health and perception of discomfort into account, but no such study has materialized quite yet. It’s possible that Texas A&M has been working on it, or that this was a student-led project and the students graduated or moved on to other things. We just don’t know! One thing we do know, though, is that in a call center environment, standing desks can make a world of difference.

Effects of Standing Desks on Productivity

Another study we can cite comes from a joint investigation between the University of California and Swarthmore College, between members of their departments of psychology. In this study, which you can read here, 96 participants were given reading comprehension and creativity tasks, while both sitting and standing. 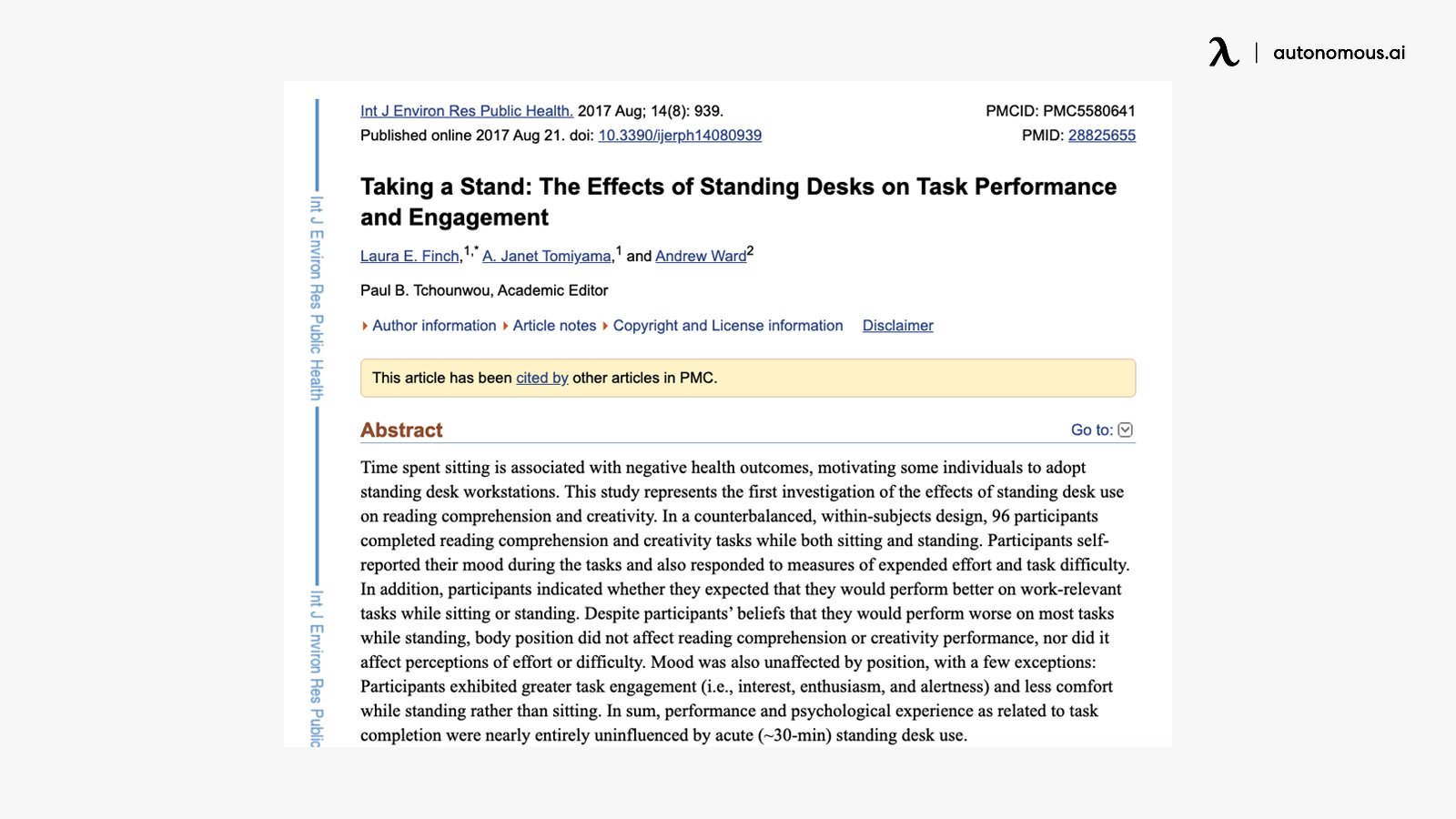 This study specifically looked for perception versus reality of performing tasks in both sitting and standing environments. Most participants believed they would have a harder time focusing and completing tasks while standing as compared to sitting, but the observed reality proved this to be untrue. To quote the results:

“Despite participants’ beliefs that they would perform worse on most tasks while standing, body position did not affect reading comprehension or creativity performance, nor did it affect perceptions of effort or difficulty. Their mood was also unaffected by position, with a few exceptions: Participants exhibited greater task engagement (i.e., interest, enthusiasm, and alertness) and less comfort while standing rather than sitting. In sum, performance and psychological experience as related to task completion were nearly entirely uninfluenced by acute (~30-min) standing desk use.”

So: their mood was unaffected, creativity and reading comprehension were unaffected, comfort lessened, but task engagement improved.

Task engagement is a key aspect of productivity; when you’re engaged in a task at hand, you’re likely to focus more on it, perform better, and take less time to do it.

The conclusion that task completion is uninfluenced is a little off-base in our opinion. Sure, emotional participation may not have changed much, but that’s what happens when you’re only studying something for a few short minutes. Standing for a whole half an hour is not a lot, and it’s barely time to adjust to your new position.

Even still, improved task engagement when standing for such a short time is promising; if you stand for long periods, you’ll have even better engagement. That’s why we recommend scheduling transitions between sitting and standing rather than just standing all day. Of course, all of this tends to vary from person to person, so if you find yourself more productive while standing, you don’t have to sit back down if you don’t want to.

SMArT Study from the National Health Service Trust in England

Another study, this one with rigorous control groups and detailed evidence-gathering, was performed in England. This study gave an intervention group standing desks, as well as literature, support, and encouragement to use them to work while standing, transitioning between sitting and standing frequently throughout the day, and studied the results at three, six, and twelve months of intervention. 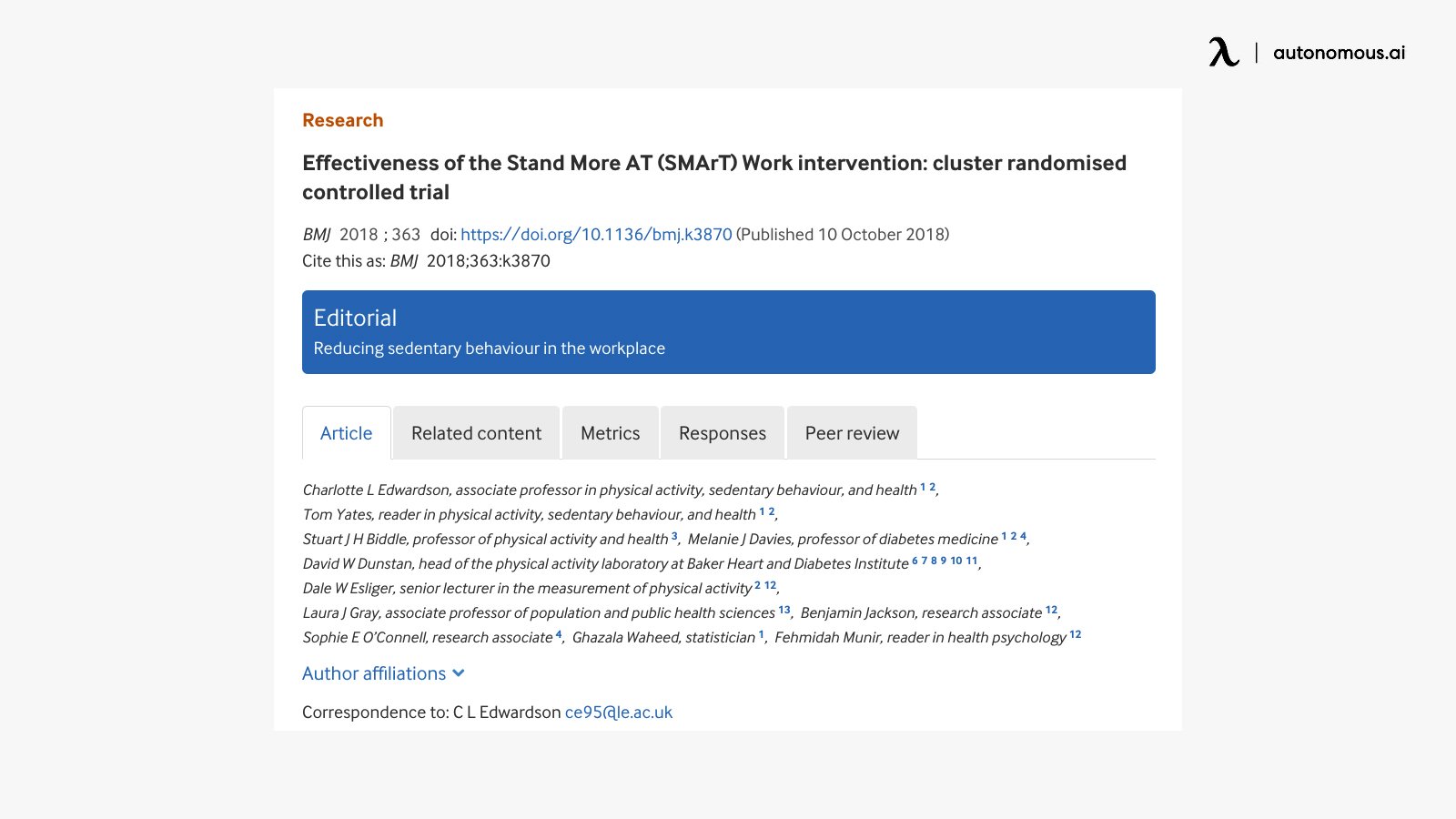 We love this study not just because it proves our point, but because it incorporated more than just throwing a standing desk at someone and hoping they use it correctly. This study made use of additional support and advice (like what we publish on this blog!) and instructions on how to properly make use of a standing desk.

What they found is that standing more led to increases in productivity, mood, physical, and psychological health. No changes were reported in absenteeism from illness, but that’s to be expected; standing isn’t going to keep you from getting a cold, after all.

Reddit is one of the best communities online for gathering unbiased, personal opinions from users. People there speak freely and are free to argue with one another, and as such, they tend to have down-to-earth and useful advice to share. Here are some things we’ve found about standing desks and productivity.

Many users in this thread report what we already know: standing for long periods, especially when you’re not used to it and don’t have the proper accessories like an anti-fatigue mat, is unlikely to benefit you. You need to get used to standing, and you need to make frequent changes between standing and sitting for the best effects. When you get tired or start losing focus in one position, do some stretches, take a walk, and come back to take up the other position. It’s the lack of motion that hurts the most. 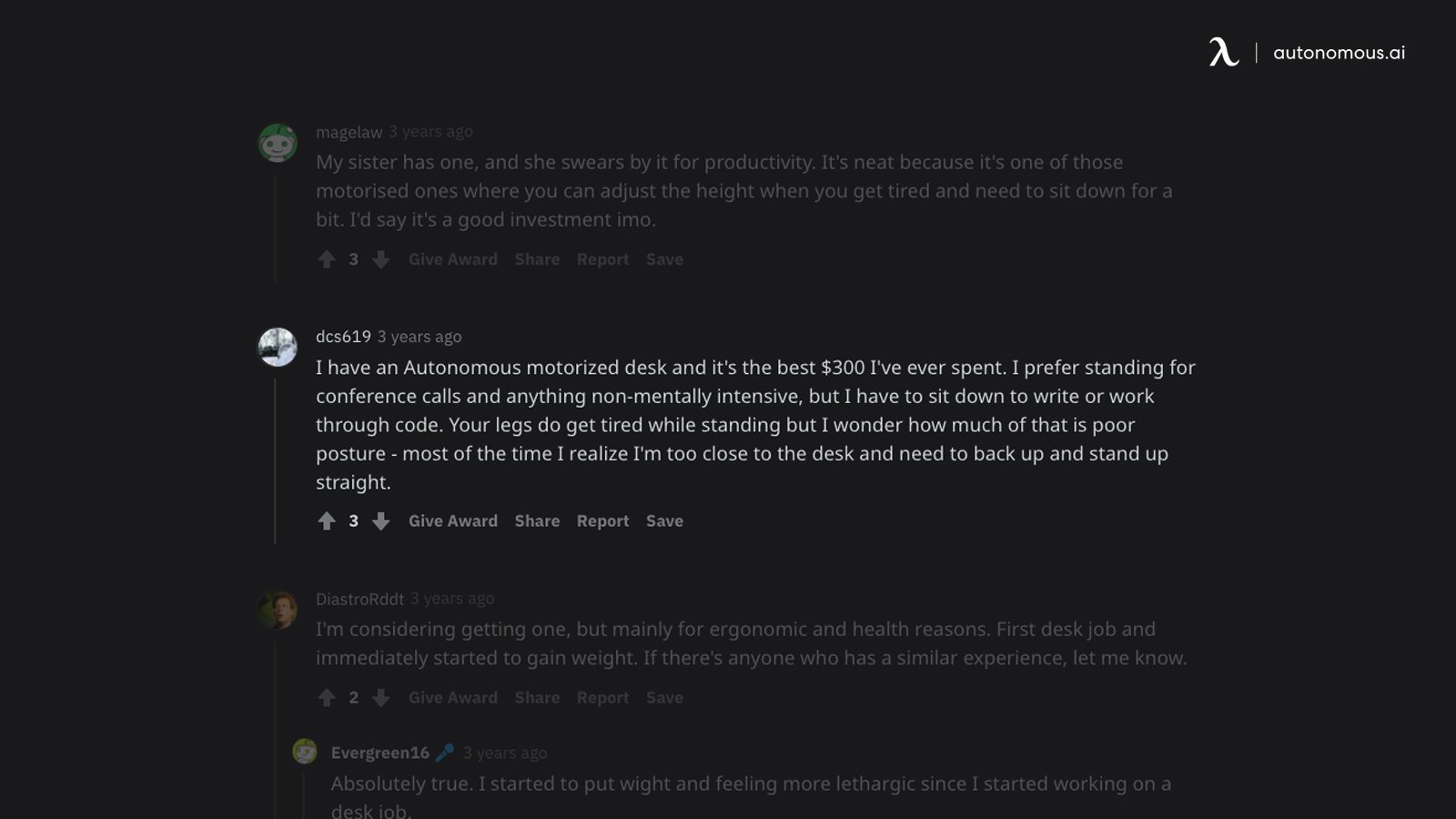 We even found a customer there! User DCS619 says:

“I have an Autonomous motorized desk and it's the best $300 I've ever spent. I prefer standing for conference calls and anything non-mentally intensive, but I have to sit down to write or work through code. Your legs do get tired while standing but I wonder how much of that is poor posture - most of the time I realize I'm too close to the desk and need to back up and stand up straight.”

Occasionally there are also threads like this one, where a user promotes their blog to talk about why they got rid of a standing desk. In this case, there are two things we have issues with. First, the user reported that they were getting used to the desk and that it was getting easier to use, but they got rid of it anyway. Secondly, they used a fixed standing desk, rather than what we recommend, a sit-stand conversion desk. When you can swap between sitting and standing regularly, you’re going to be in a much better position overall.

Finally, you can check out this thread. It’s not really about how productivity increases with a standing desk; rather, it’s inspirational. These users have shared their photos of their standing desk setups, and how they’ve positioned their workstations to be most effective. They can give you some good ideas of how you can adjust your lifestyle and workstation setup for maximum productivity while standing, or transitioning between the two.

In the interests of full disclosure, there’s always going to be some counter-evidence for anything deemed good. In this case, we’ve located a bit of a study performed by Australia’s Curtin University. Well, we’ve located evidence of the study; the original research was published in a journal and we haven’t located it online yet, only reporting on it.

This study found that, in their sample, standing for 2+ hours increased physical discomfort, muscle fatigue, and vein swelling.

Sounds bad, right? Well, not so fast. There are quite a few issues with this study. For one thing, it only studied 20 people, which is far too small a sample size to get reliable results that reflect the broader population. For another, it’s a short-term study. Yes, you’ll have some discomfort when you initially switch from a sitting desk to a standing desk. Your body is adapted to sitting for long periods; when you start standing for long periods, it’s going to hurt in ways it didn’t before. Feet ache, legs get tired, backs get sore.

You also get sore after working out; does that mean working out is bad for you? Of course not.

Another study performed for the American Journal of Epidemiology looked at 7,000 workers and found that workers who stood for long periods at their jobs were at greater risk of heart disease than those who sat. This study has been widely reported, and misreported, claiming that it studied office workers (which it did not) and that it had a representative sample (which it did not.) 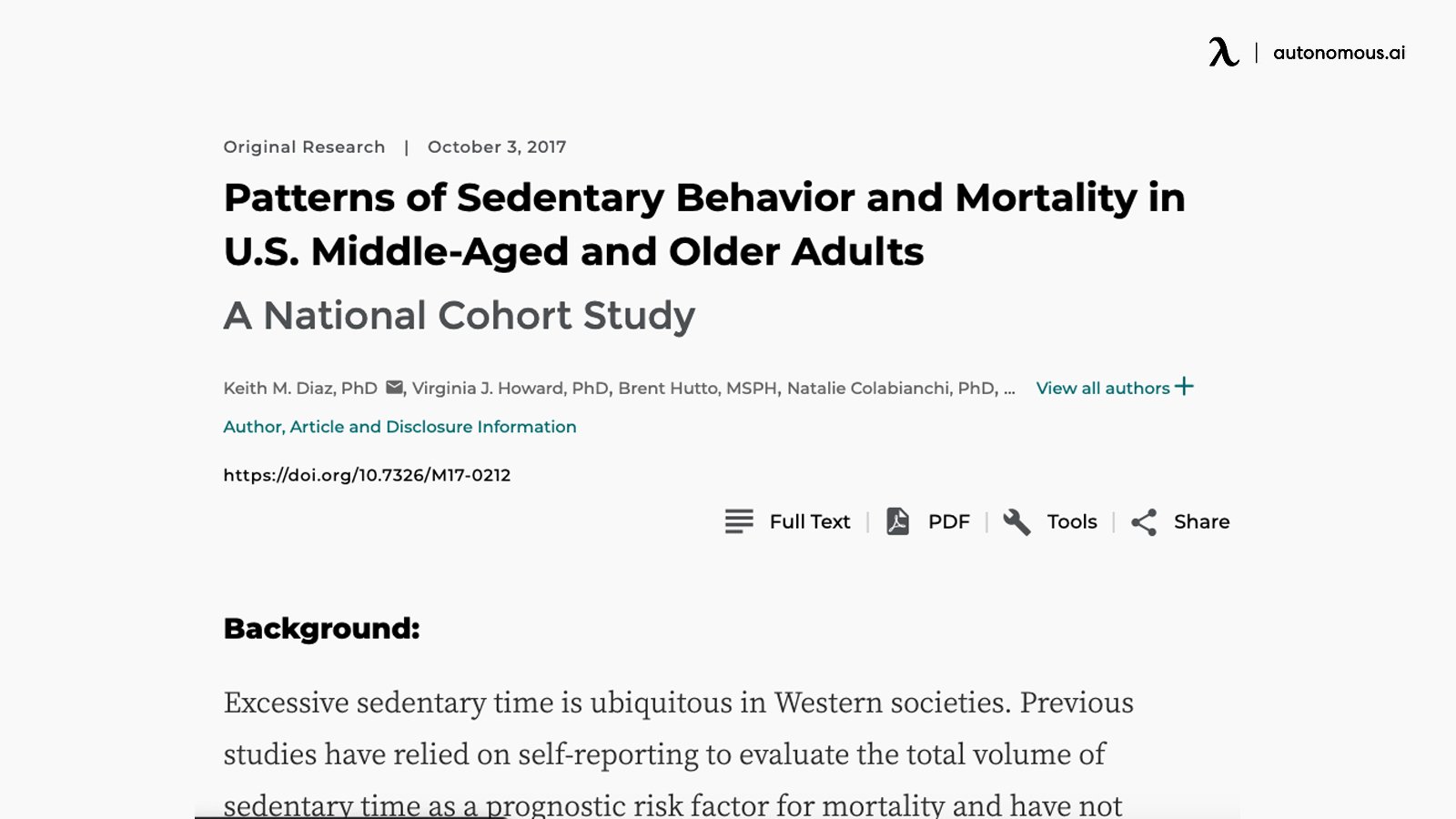 Sure, line cooks and retail workers are more likely to get heart disease, but you know why? It’s not because they’re standing. It’s because those roles are under-paid, the people who work are forced to work long hours with few benefits, who can’t go to the doctor when they have issues, who don’t have the time for the luxury of cooking healthy food. Of course, you’re going to have health problems when pressures of your life build up and you don’t have healthy, relaxing, or creative outlets available to you.

The study also noted that heart disease was high amongst some kinds of sitting, sedentary roles as well, including secretaries and drivers.

Our argument for standing desks is that they can benefit people who sit all the time, not that standing alone is enough to catapult you into being some paragon of health. This study simply misrepresents what it was actually studying (and has nothing to do with standing desks, really), and has been picked up as viral clickbait to run counter to good advice about standing while at work.

The key here is to alternate between standing and sitting. Too much standing or too much sitting can prevent healthy blood flow and strain your muscles.

Pretty much all of the studies, literature, and even anecdotal evidence we’ve seen reinforces our point, which makes sense since our point is based on the studies and science behind sitting and standing.

Sitting for long periods is bad for you. If you have to sit, using a well-adjusted ergonomic chair is a must. Even better for you is getting a desk that can switch between sitting and standing positions (ideally at the touch of a button) and using it throughout the day. Sit for an hour or two, stand up, do some stretches, take a break, drink some water, and get back to work while standing. Stand for a while, do some more stretches, drink some more water, hit up the bathroom, then come back to sit.

The key, as always, is the transition. When you switch between both postures, you’ll be healthier and more productive than when you’re fixed in either position.