A Complete Guide for White Prebuilt PCs in 2023

There are a host of advantages to choosing to get yourself a prebuilt PC design as opposed to custom building one by hand. There's a whole debate on this, and some people are not necessarily too keen on going the prebuilt route. If you're here though, you are likely not in that camp, and may even be considering a white prebuilt PC.

White is one of the most exquisite case colors out there, and it tends to complement PC game furniture well, especially for those who may be looking for a minimalist design. If you were unaware, the minimalist aesthetic is best brought out by neutral colors such as black or white.

Even beyond this, there are many gaming aesthetic ideas that you could go for with your all white prebuilt PC as a centerpiece, as you are only limited by your imagination. Before you branch out to your entire gaming setup though, you may want to know what factors you should be thinking of as you contemplate the purchase of a white prebuilt gaming PC.

That's why you are here. If you were doing an Xbox gaming setup, then the internals are set in stone, so you would only need to think about the rest of the layout. However, on the gaming rig side of things, there is more to think about than the white prebuilt PC case.

What should you be thinking about internally, from a component standpoint and beyond? Most of the information below dives into this question. First, you get to go through a brief about the different components that you are going to find within your white prebuilt PC.

Next, there is a quick high-level guide on some of the factors that you may want to think of, which should help you to make the best decision possible. 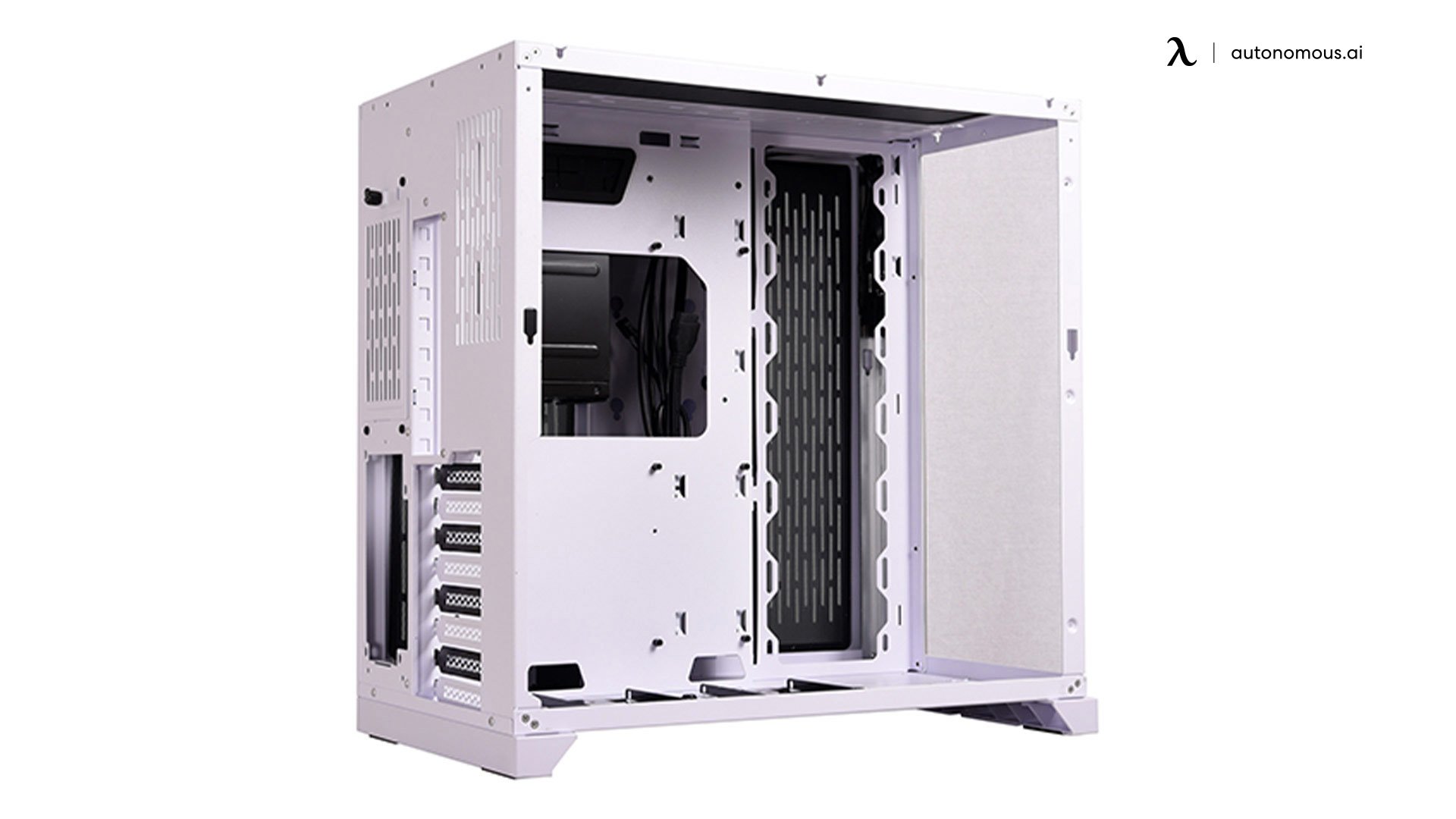 Obviously, you want a white prebuilt PC case. However, not all cases are made equal. Nevertheless, you should be able to get a prebuilt design with a solid one. For the best aesthetics, tempered glass options are often preferred.

You find that these allow the case to have a luxurious aesthetic, and this is why professional gaming rigs often look so futuristic. Beyond the visual that white naturally creates, since it's not a strong color, you find that it tends to bring out and complement stronger ones very easily.

So, RGB lighting effects, for example, that help with that eye-popping charm are enhanced. To this end, you may also want to look out for a white case that boasts RGB fans. 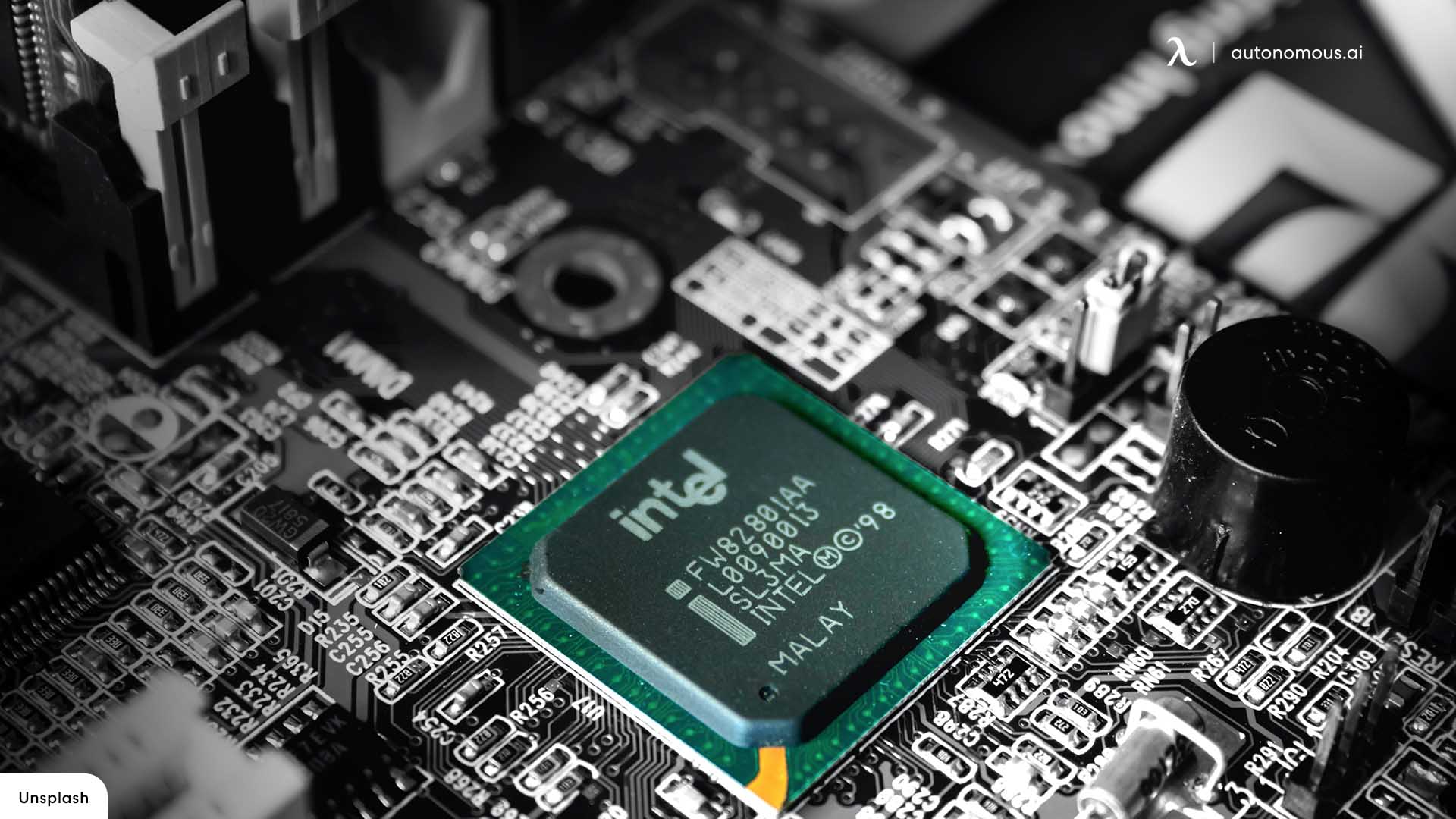 The motherboard is one of the centerpieces of design, so having a good one in your PC is non-negotiable. If you're purchasing a pre-built design, then the chances are that you aren't going to have much say in the motherboard that's in it.

You can't do much more than find out which one is present and purchase or forgoing the PC based on what it is, as well as what the other components may be. Top motherboard brands include MSI and Asus. For example, the Asus TUF gaming Z590 is a solid choice for most modern gaming needs. 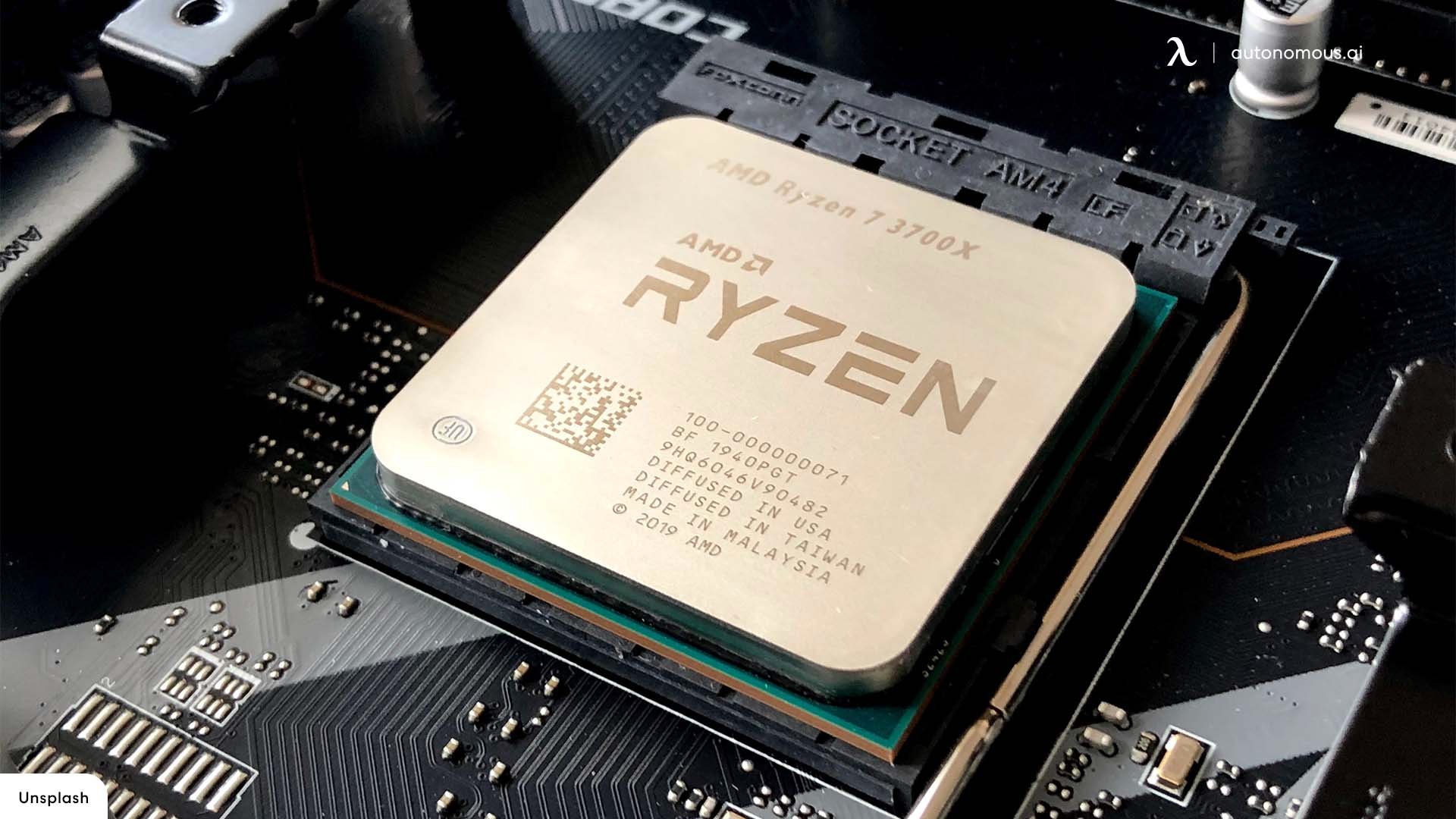 So, the i7-10700K, for example, is a 10th generation Intel i7 CPU that is overclockable. At the i7 level, you are going to have enough threads to handle playing high-fidelity AAA titles, while streaming your gameplay for your audience to enjoy. 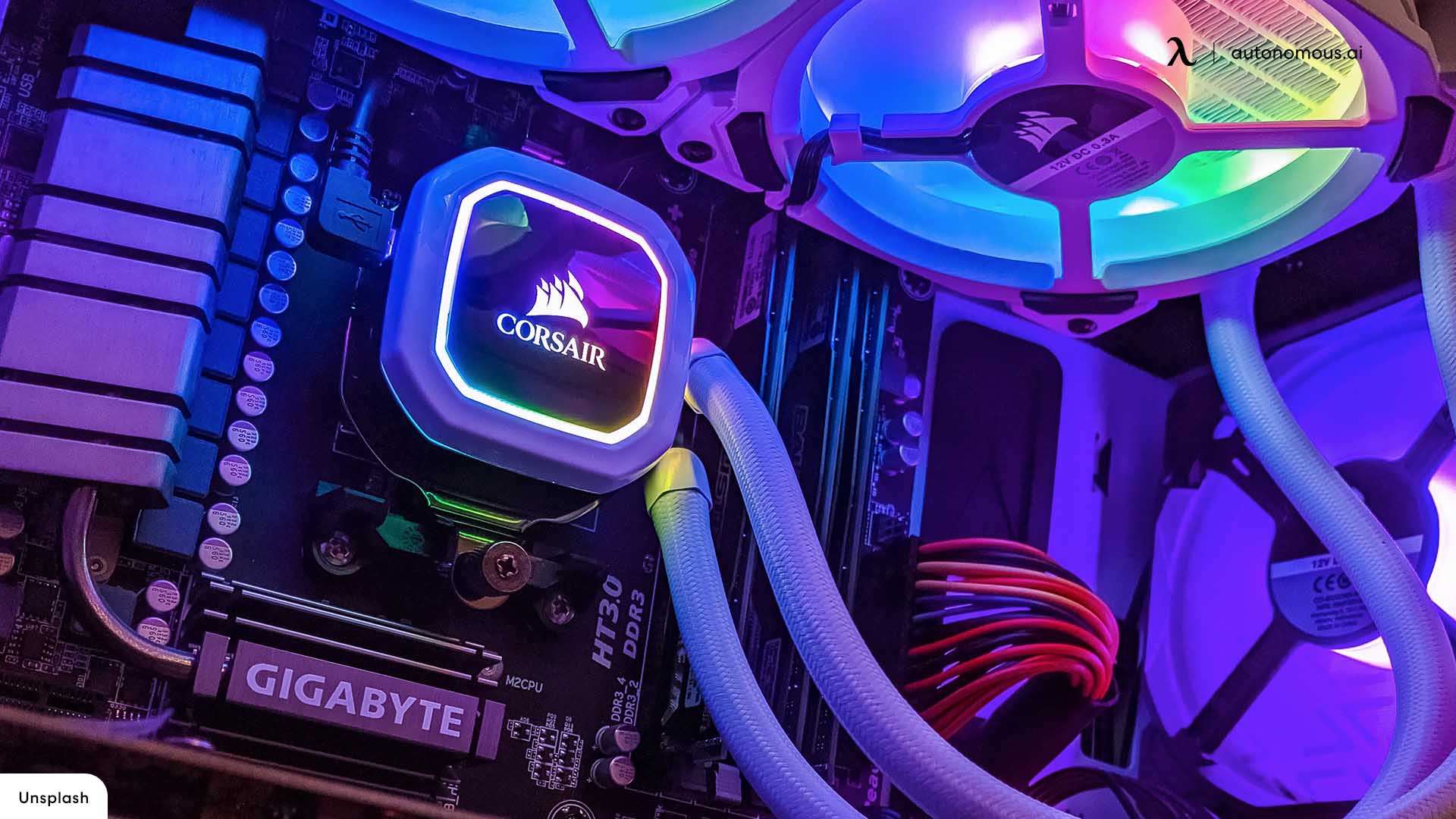 The cooler is self-explanatory. Its responsibility is to ensure that the CPU remains cool as it performs the tasks that you throw at it. Without adequate cooling present, your processor is going to overheat and get damaged.

Obviously, all the components need power to run, and this is where your power supply comes into the mix. Technically speaking, when you plug your power cord into your rig, you're plugging it directly into the power supply.

Through its various connections, it then transmits power to other components. Note that all power supplies have a certain amount of wattage that they can provide, so the rule of thumb is typically to add up the wattage requirements of the components to be put inside the white prebuilt PC, ensure there is some breathing room, and choose a power supply that goes above that breathing room threshold.

For example, if the other components require a total of 650W, then a 700W or a 750W power supply may be desirable. 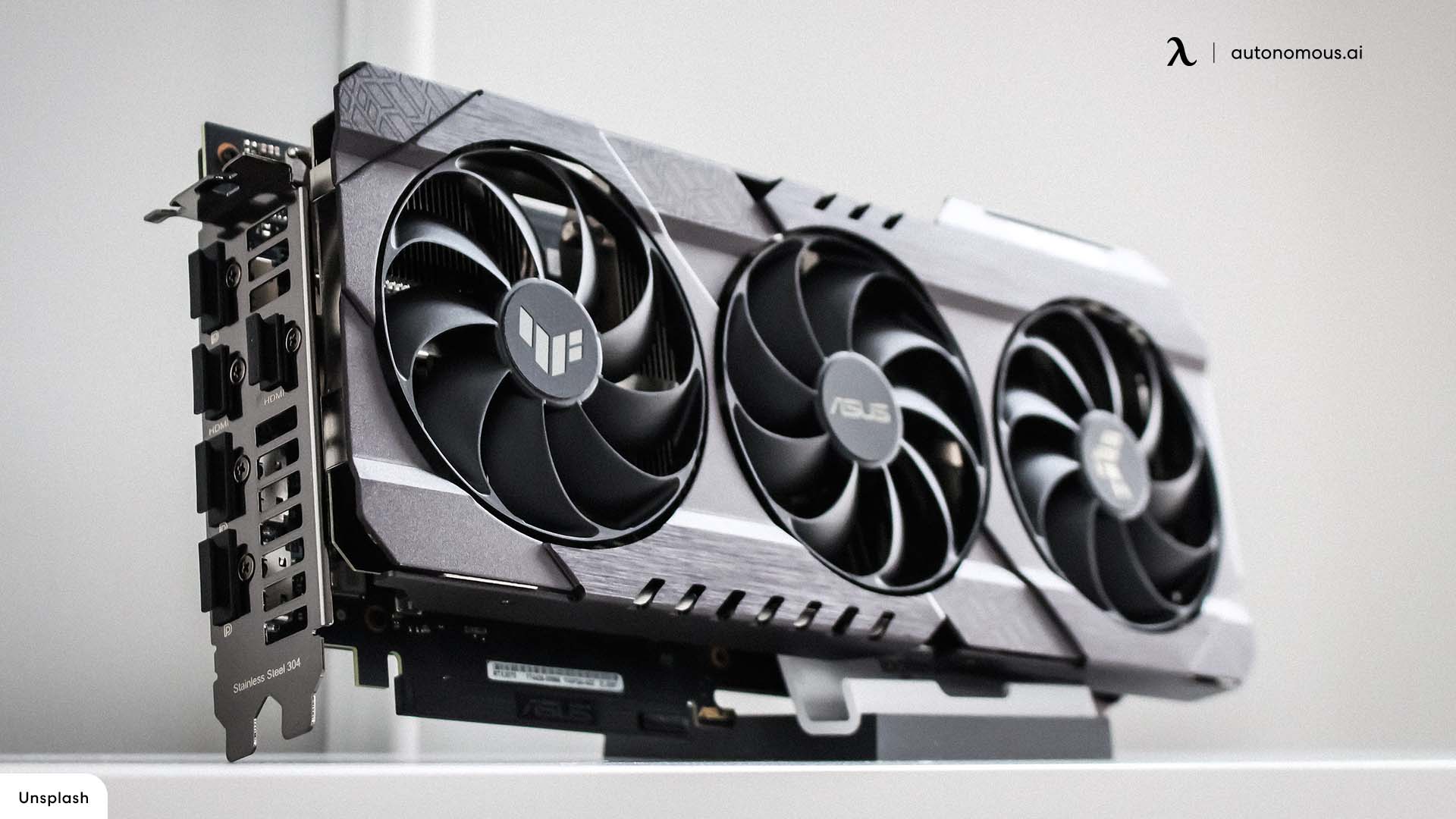 Your graphics card is where the visual magic happens as far as your gaming is concerned. Newer AAA games require a lot of power to display them in all their glory. The more powerful a graphics card is, the better the chances it has of handling a greater number of titles.

While streaming is more CPU intensive, gaming is more GPU intensive. NVIDIA and Asus are known for their graphics card designs. The former has the edge though, especially with its RTX designs. The RTX 3060, for example, is one of the best you can get your hands on, and there is not much that you're not going to be able to run with such a beast of a card.

Two factors determine the performance you get out of your memory. The first is its capacity and the second is the speed. Modern motherboards tend to provide four slots that you can use to cumulatively stack up your memory. 16GB is sufficient for most users from a capacity standpoint.

As far as speed goes, you typically want a performance of at least 3,000 MHz. Higher metrics in the 3,200 MHz and above bracket provide even greater power to you. 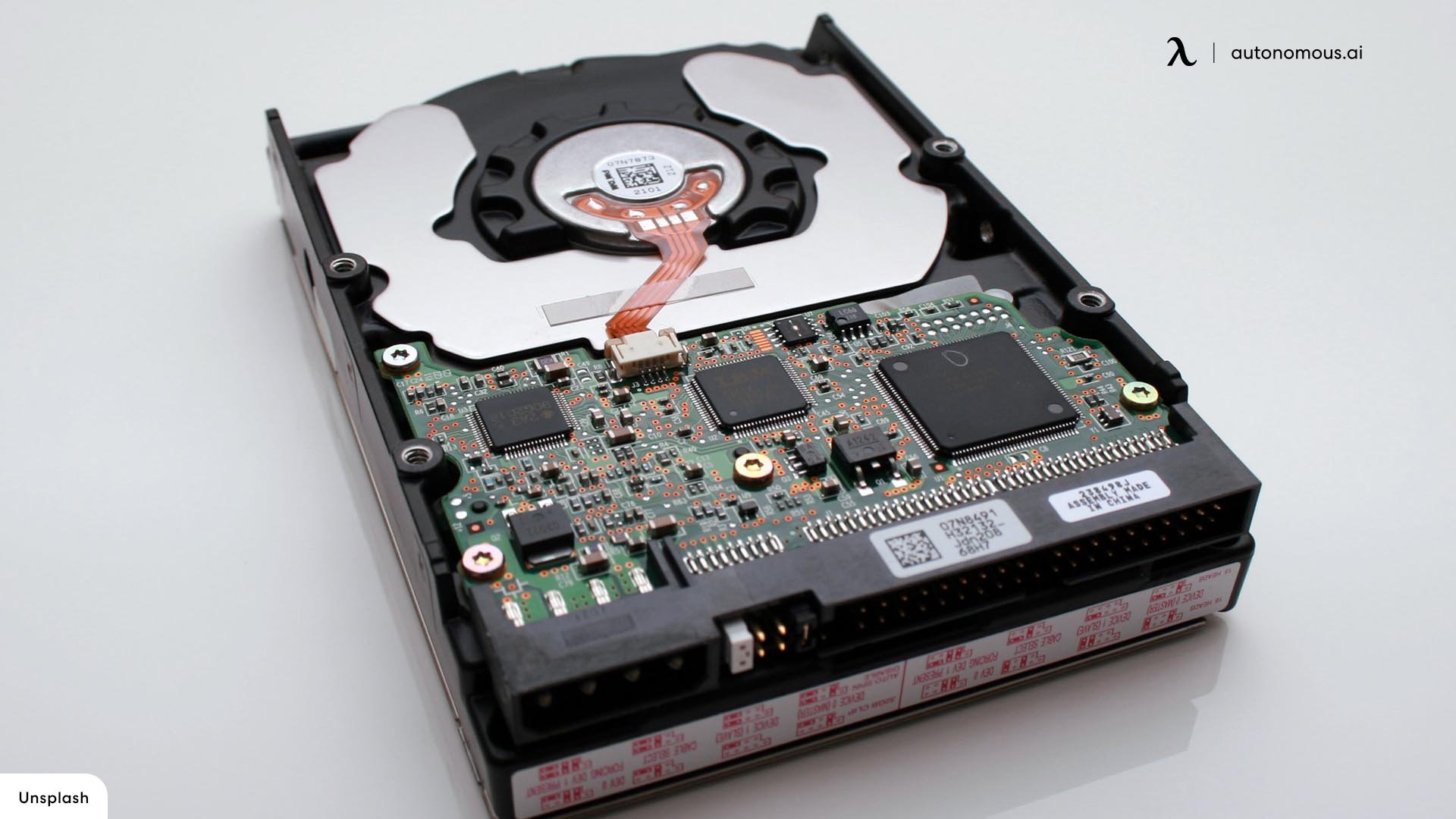 Storage is one of the last pieces of the puzzle, and like memory, capacity and speed are important. While a 512 GB storage device can work, today's PCs are often better off with a 1TB storage medium. After all, games continue to get larger, which means 512 GB drives can fill up quickly.

As far as performance goes, rotational HDD drives are no longer your best option. Instead, you may want to opt for an M.2 PCIe 3.0 NVME SSD. You'd be surprised at the dramatic change in boot-up and program loading times.

What to Consider When Choosing a White Prebuilt PC

Obviously, you want to consider the components that are in your white prebuilt PC. These were laid out for you in detail above, so you now have a baseline to understand what makes satisfactory white prebuilt PC parts and which ones you don't want to give the time of day.

However, there is more to the conversation than simply the parts that are inside the case. Now, it's time to look at a couple of those areas, which should further guide you into making the right choice. 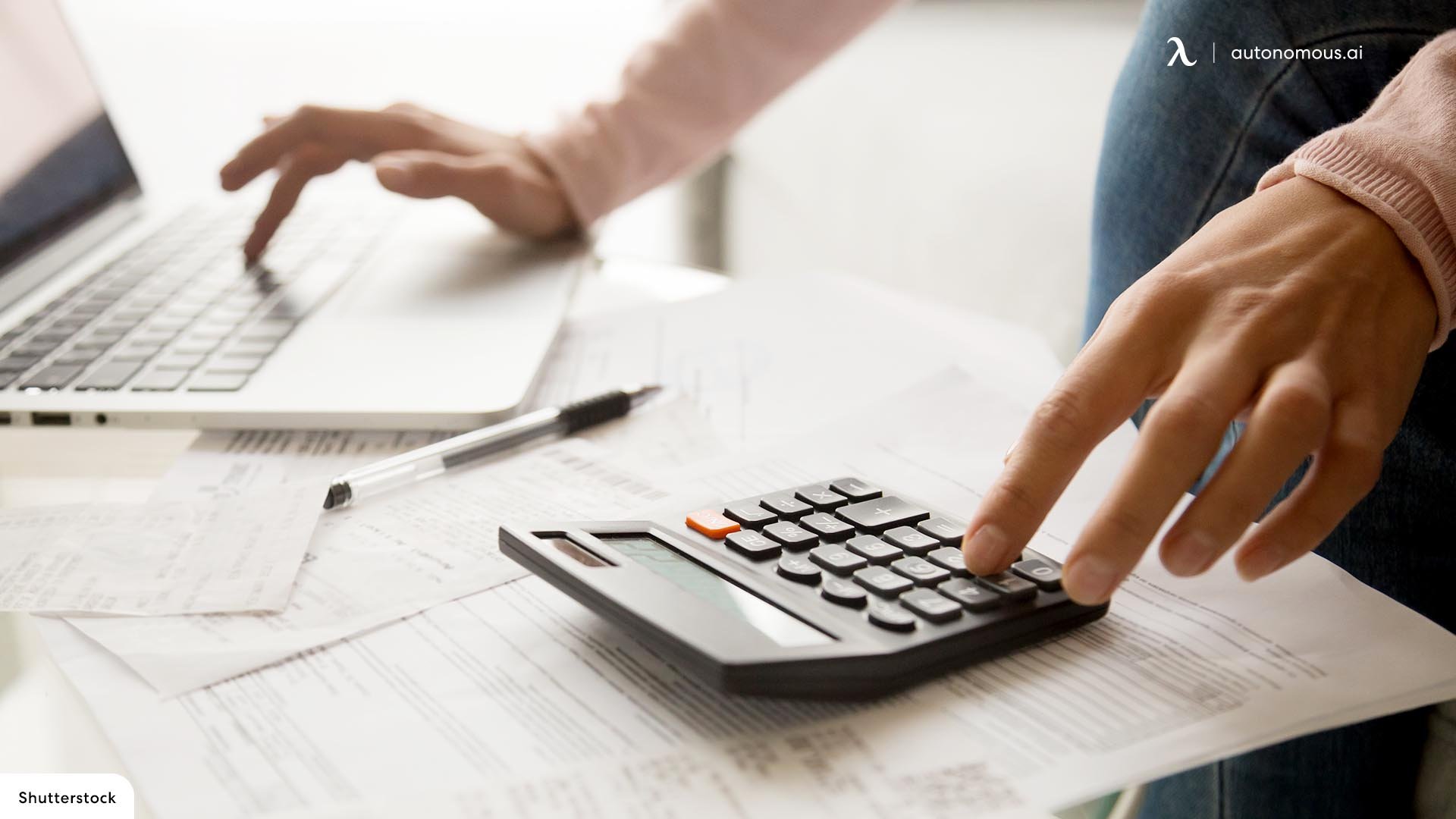 It's very unlikely that anyone has to give you a detailed explanation of why thinking about your budget may be a very good idea as you embark on this PC purchase journey. Obviously, if you cannot afford it, then the purchase simply is not happening.

However, what you don't want to do is fall into the trap of buying the most expensive PC available within your budget. What you want is to create the best value in a white prebuilt gaming PC.

So, it's a good idea to look at models in terms of what they bring to the table. You may find that you save quite a bit on a cost-effective design by approaching the situation this way. 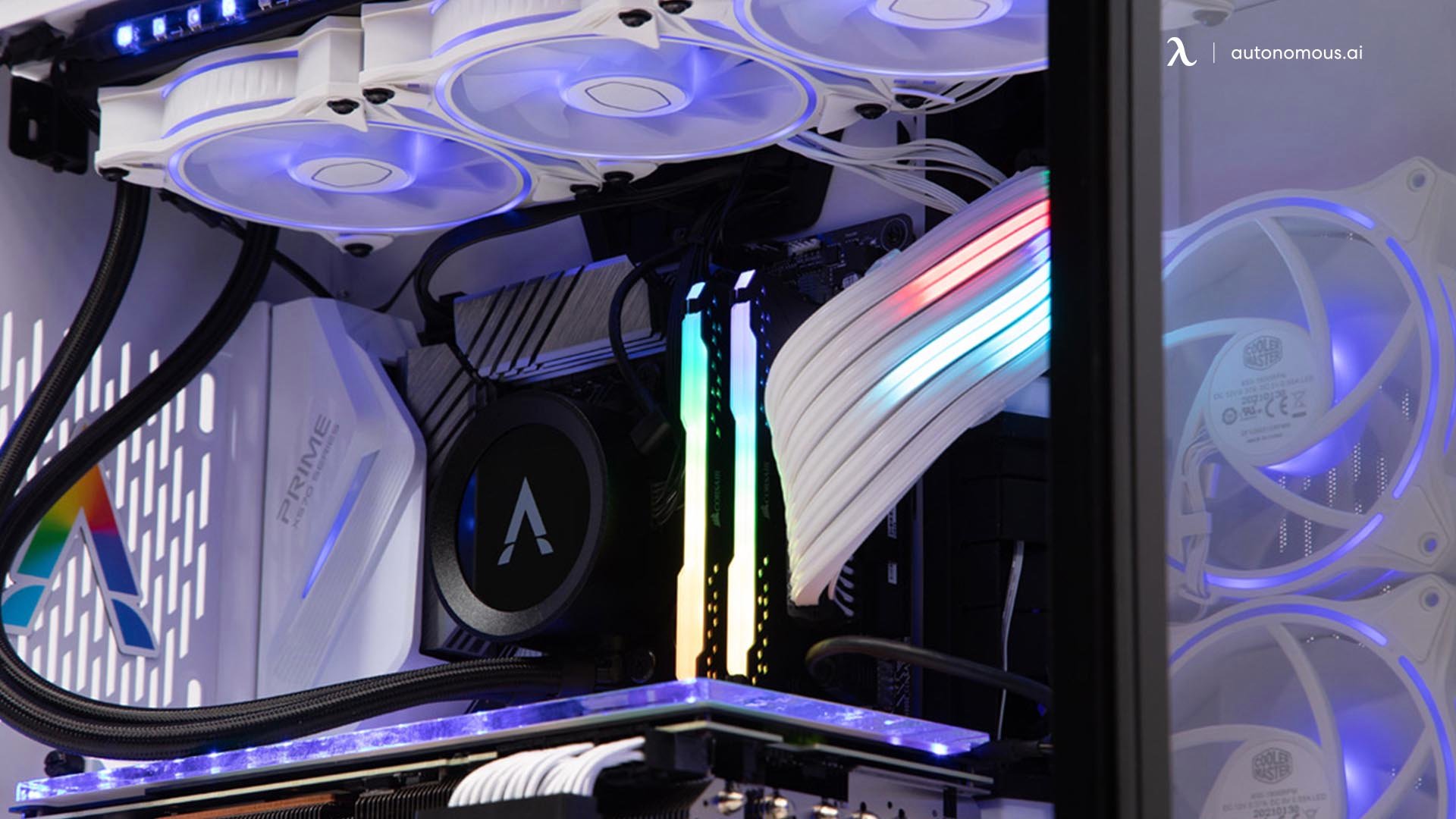 When all is said and done and the components come together inside your white prebuilt PC, how does everything perform? There is a great way for you to find out how a PC handles certain AAA titles without having to have the PC or play them.

Websites, such as Can I Run It, have a database of the minimum and recommended specs for just about every PC game out there. If not every game, then the ones that are the most popular are certainly there.

By inputting your white prebuilt PC specs, you can see if it can handle a certain game. To take it a step further, you are also advised on how many games in the entire database the PC can run from both a minimum spec and recommended spec perspective.

Technically speaking, you always want to meet or exceed recommended specs, since that is what is going to contribute to your ability to run games at their highest visual settings.

Remember to think about the space that you have and where you are going to be putting your gaming rig. Color is not much of a consideration here, since you are looking to purchase a white prebuilt PC.

So, it's more of contemplating where you're going to be putting your system unit, gaming monitor, speakers, etc.

You don't live in a world where everything is perfect, and even the best parts in a PC can often arrive completely dead. This is one of the biggest risks of building a PC yourself, because you cannot always get these faulty items replaced.

However, when you buy a prebuilt PC, there is usually a warranty attached to your purchase agreement. Therefore, you can get replacement parts and labor performed for free to address any functionality issues. 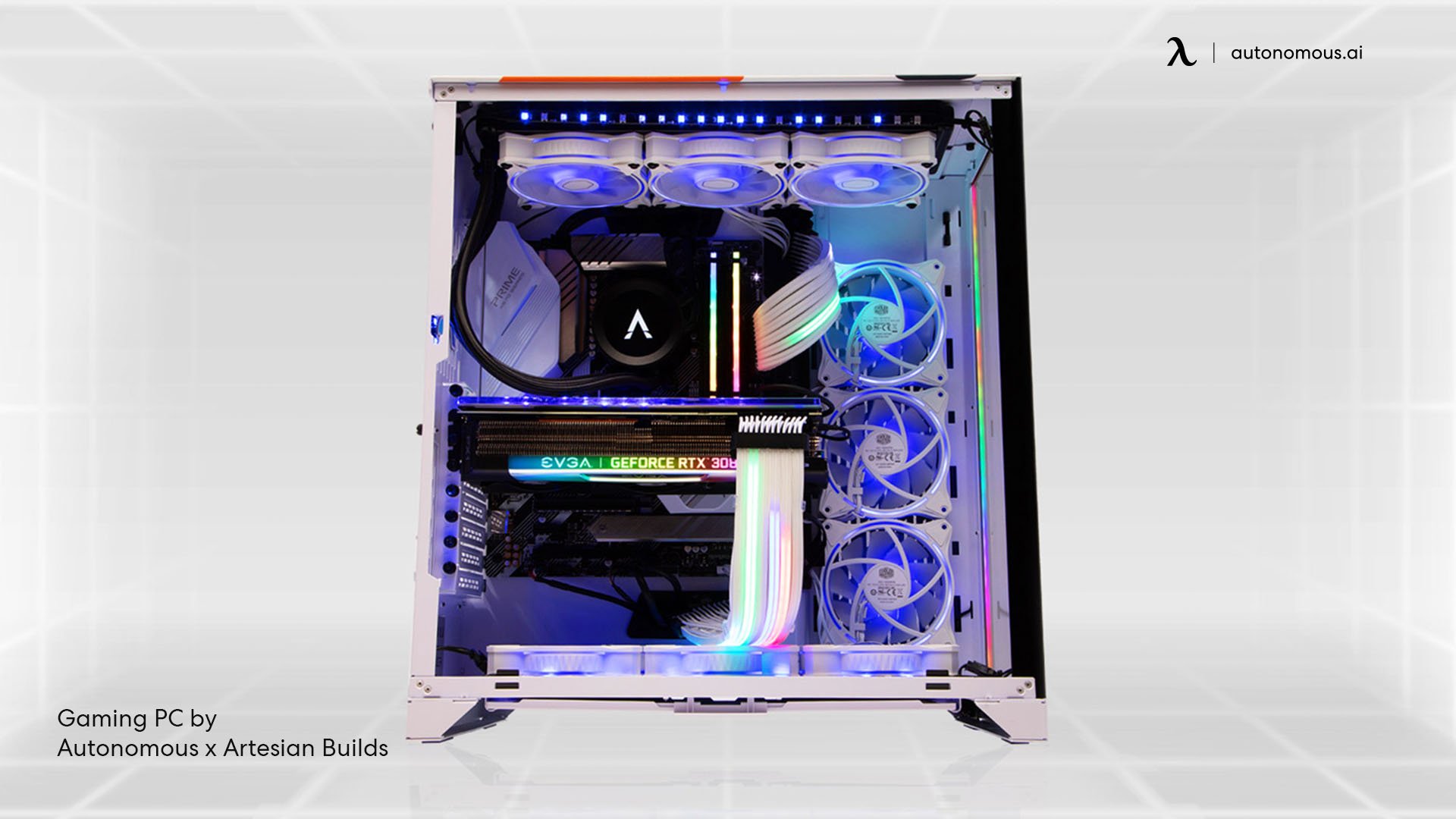 You don't want to approach your white prebuilt PC purchases based on what games exist today. Assume that requirements are only going to get more intensive in the future. You find that many modern games can be run relatively easily by high-end PCs.

However, you want to leave a bit of a buffer so when those more demanding games hit the market, you don't have to worry about getting a new PC to handle them. 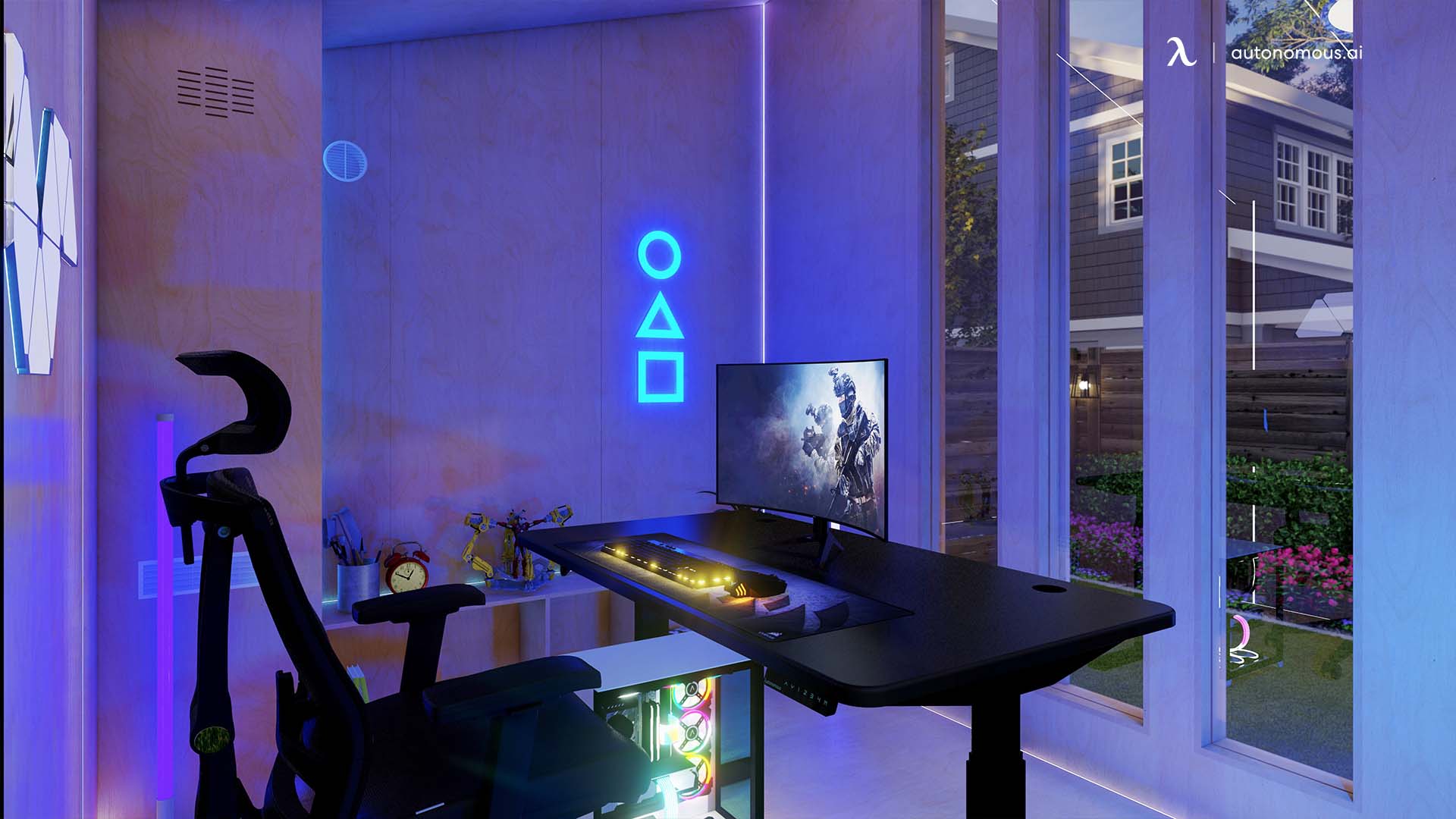 So, what is a solid white prebuilt PC that meets many of the requirements established here? Well, you may want to consider the Artesian Builds PC for this. Its white RGB accented case complete with RGB fans is aesthetically pleasing and you get three years of warranty on parts and five years for labor.

It's highly future proofed, based on its components, which you get an understanding of in a moment. The unit also performs greatly and is not necessarily going to cause you to break the bank, especially when compared to similar units.

Now, there is no doubt that you should be getting the most optimal white prebuilt PC within your budget. Of course, a white gaming desk and probably a set of Gravastar Mars Pro speakers are just two more elements that you can use to effectively bring out a truly sleek gaming area.

You likely came into this article knowing that you wanted to have a white prebuilt PC, but not necessarily with any concept of where your head should be to ensure you get the best value. After seeing the component reviews and the considerations above, you should be in a much better position to make the best possible choices.

Home
/Ourblog
/A Complete Guide for White Prebuilt PCs in 2023