Electric vs. Manual Standing Desk: Which One Suit You Most

What is better, an electric standing desk or a hand crank standing desk? Electric vs. manual standing desk arguments are commonplace in the modern era, as some people don’t know which one is better. Some of it is personal preference, but there are some objective facts associated with both desk types. Some people know it as the hand crank vs. electric sit-stand desk, but the identity is the same. Both desks help with increasing your productivity, so there are similarities between the two.

The first frame to discuss is the electric standing desk. Something like the SmartDesk Core is a prime example of a good electric standing desk, you can check the full review of SmartDesk Core at our Autonomous site. Through the push of a button, the desk can elevate or lower its height within a few seconds. Typically, precise motor drives make this type of desk possible. Other than that, it lacks a hand crank that the other type possesses and looks normal.

By comparison, the hand crank standing desk is highly similar, except it uses a hand crank to elevate or lower its height. As it requires physical action, this type of desk can be a tad daunting for weak individuals. However, it is also a good workout of the same token. It’s also known as a manual frame, so you may see the names switched interchangeably. Aside from that, it isn’t too radically different from an electric desk, except it has a visible hand crank and doesn’t use electricity. 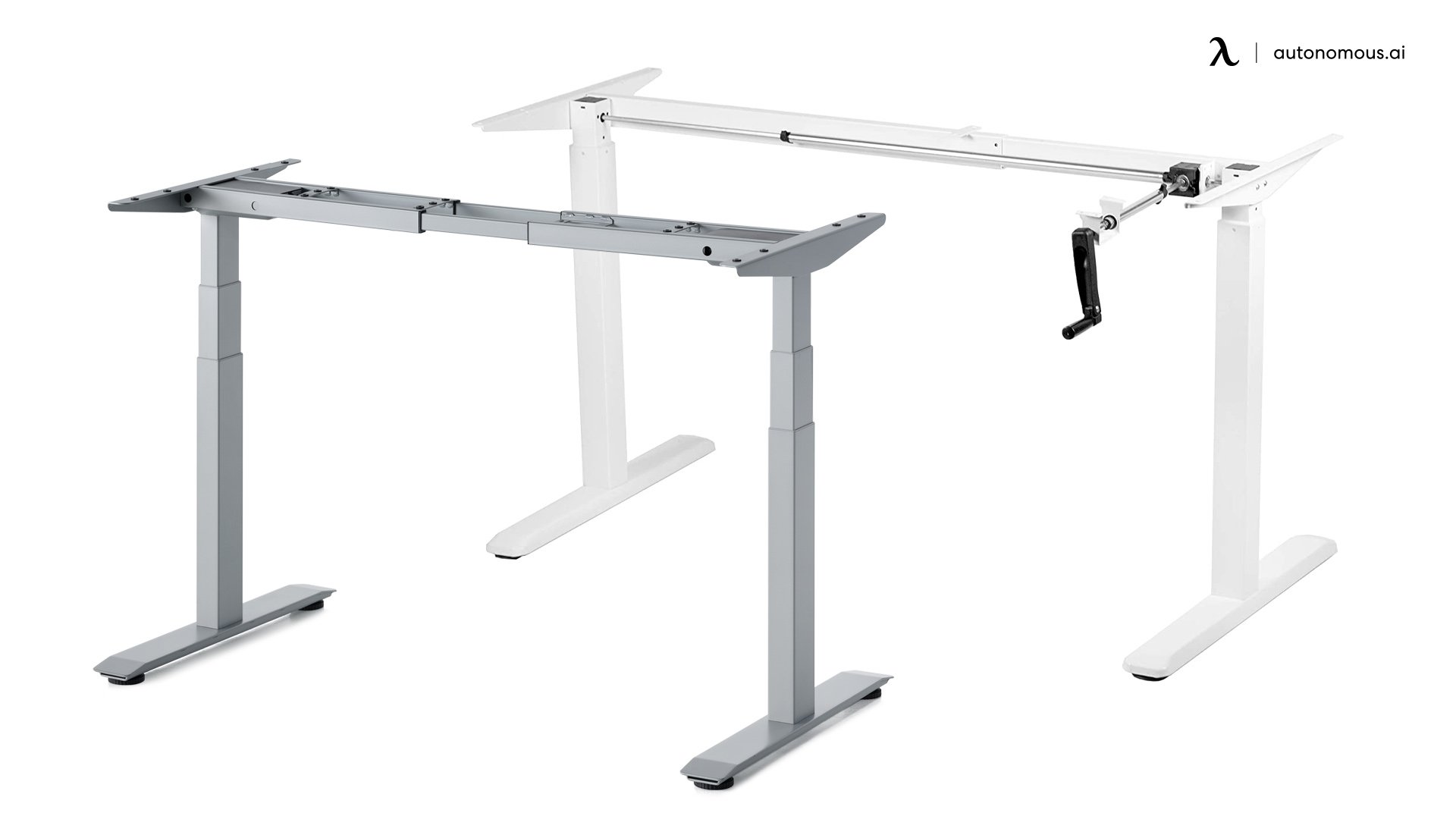 Both types of frames are specially designed to support a standing desk. They work exceptionally well to ensure their users can change the height level of the desk on a whim. This ability gives it significant flexibility over regular desks, as you can use these desks via standing or on an ergonomic chair.

Any benefit associated with a standing desk applies to both archetypes. As they are standing desks at their core, their user can easily choose to sit on a chair or stand while using it thanks to its adjustable height. While they differ in how they elevate their peak, one major similarity is that they are both adjustable. This simple feature means both types are also ergonomic in design. 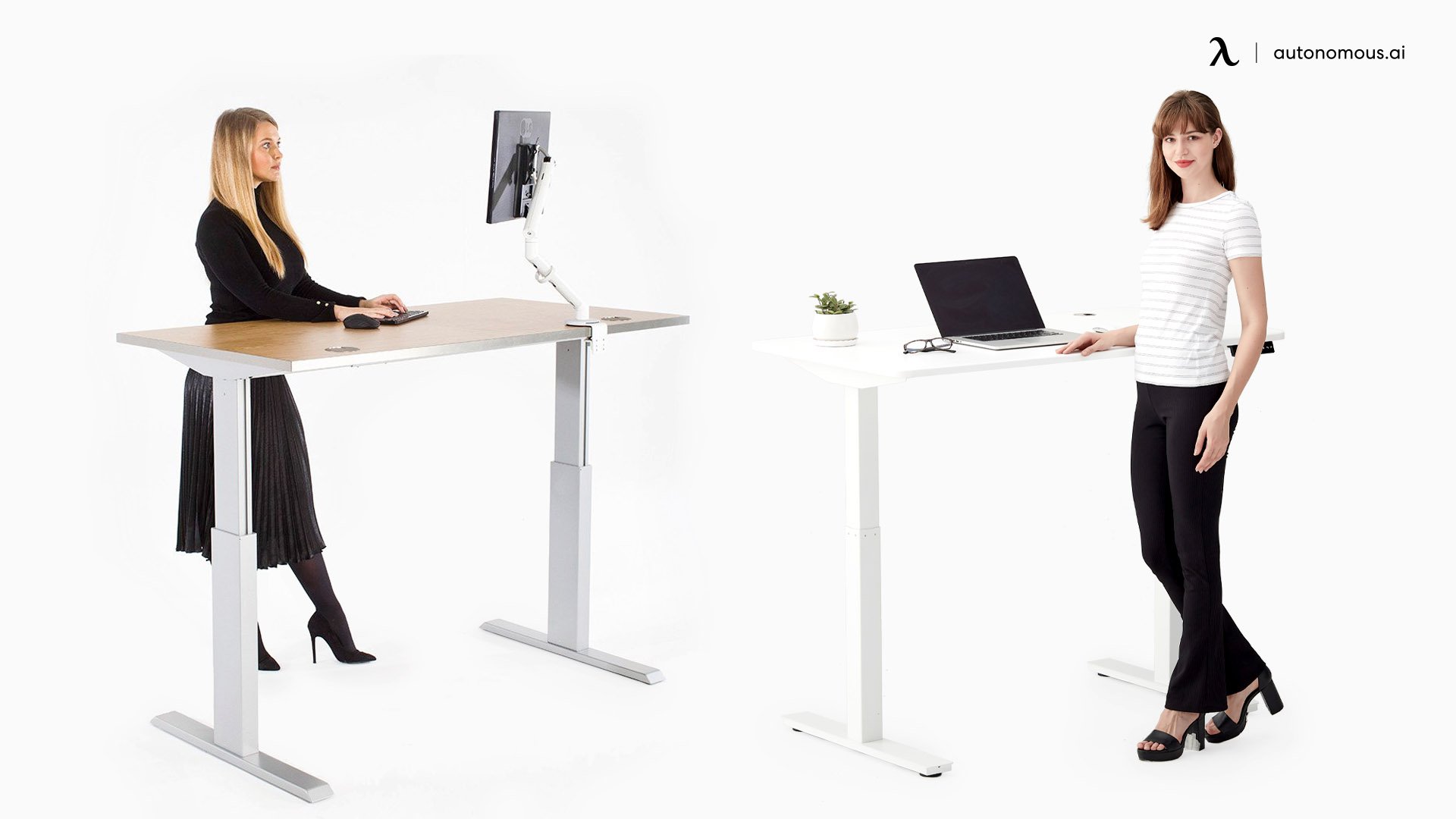 There are many types of hand crank and electric standing desks on the market, but many visual variants are similar to one another. The main difference visually is the hand crank, as other than that, they can look identical. A similar structure also means their functionality is highly similar to one another. Both can hold similar objects like computers and monitors without it being troublesome to their overall design.

Another similarity is how a person buys them. Both options are available online and often have similar shipping, taxes, and other miscellaneous buyer factors. If an office worker needs to use a standing desk, both can get the job done well. While there are many similarities, there are notable differences worth pointing out. 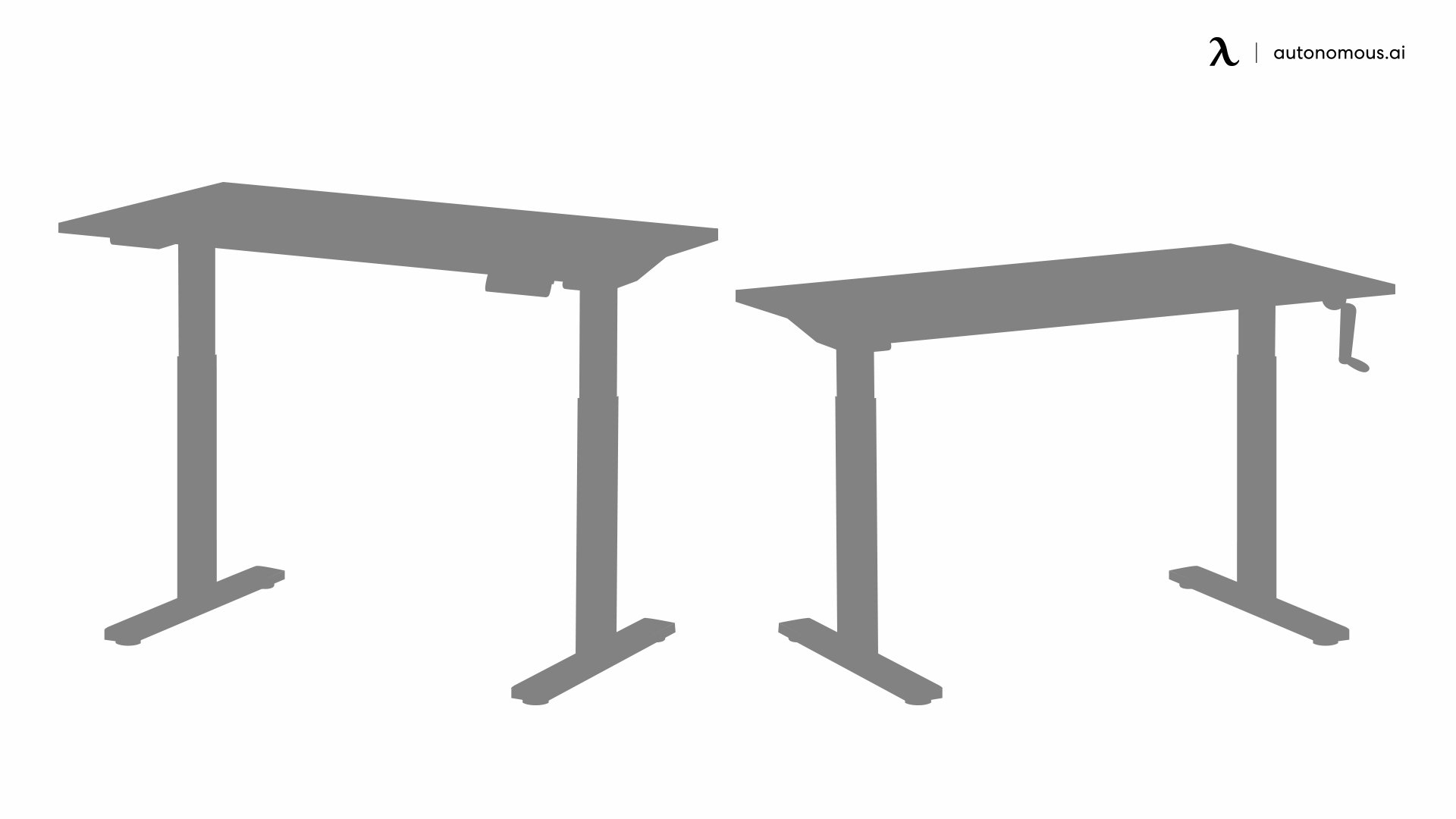 Before discussing the individual advantages and disadvantages for both desk types, the following is a quick summarization of their similarities:

To find out which is between in an electric vs. manual standing desk discussion, it is imperative to note what an electric desk is compared to a manual one. Like all things automatic, this type of desk is easier to use. As it is electrical, it can be prone to mechanical mishaps if obtained from a shoddy manufacturer. Aside from that, its electrical power allows it to lift more compared to a hand crank desk.

Another huge benefit to its name is that it gets better in each passing generation. A hand crank design cannot be improved too much between generations. By comparison, an electric standing desk has more power and works faster. This extra efficiency often makes it more desirable for office workers strictly looking for pure performance. Electric standing desks were once known to be loud and annoying when changing height, but that’s no longer an issue. Recent additions like the Smart Desk 4 are deceptively quiet. As a result, one of their biggest flaws  has been removed thanks to growing technology. 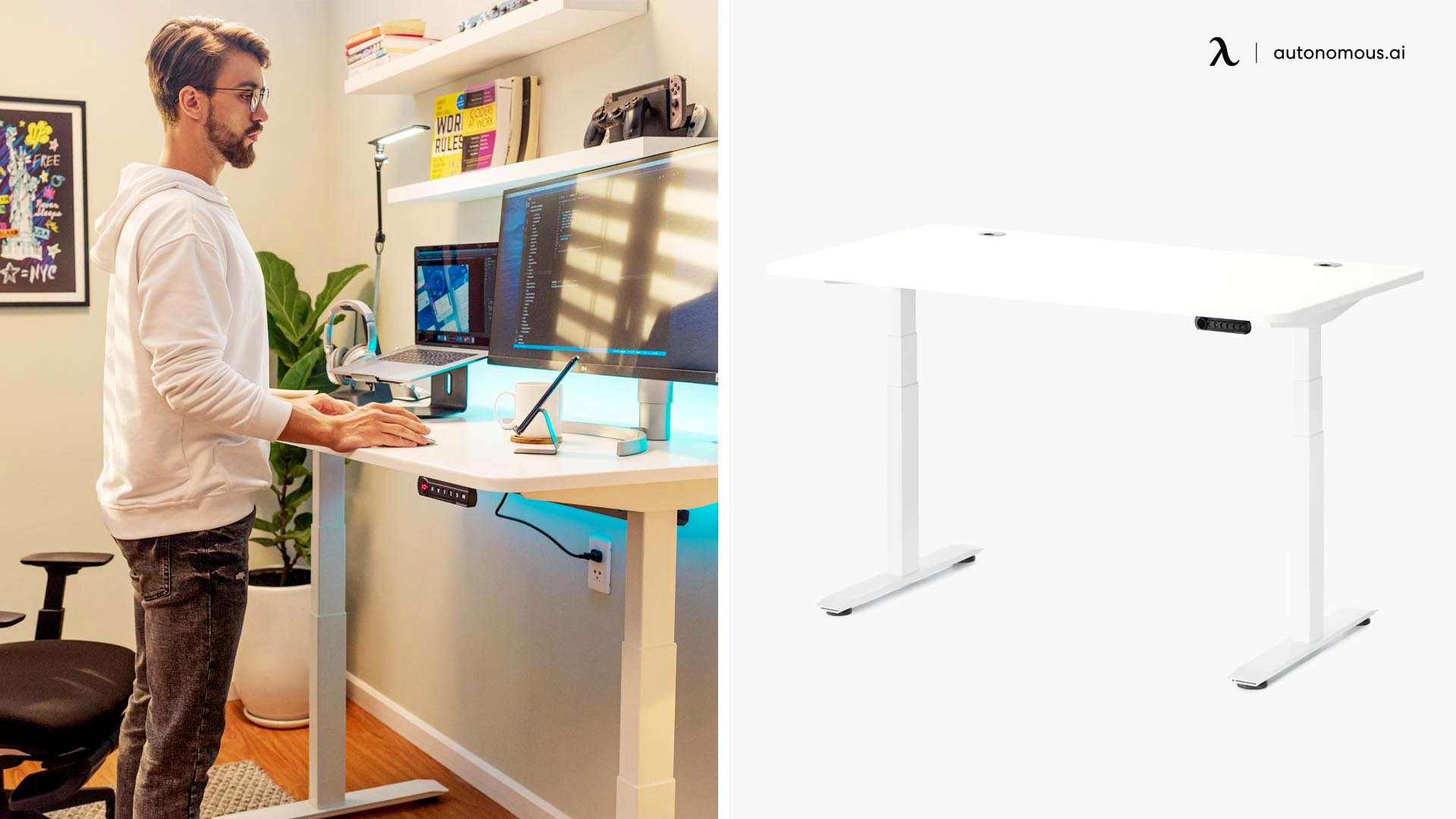 Another thing worth noting in the electric vs. manual standing desk debate is that electric desks are compatible with apps. As with all things technical these days, there’s an app for standing desks! These apps can help increase a person’s productivity even further! If you were to try and do so with a hand crank desk, you might be disappointed. Instead, you need good discipline instead of an app for those sorts of desks. The extra power in electric desks also allows it to carry more weight and become more functional in alternate styles (L-shaped, U-shaped, etc.).

The main flaws of electric desks are their price. As technology grows, so do the costs associated with it. It’s unfortunate, but it’s well worth it if you can spare some additional change for more functionality. Aside from that, it’s also harder to repair as most people are not technically gifted with the knowledge needed for fixing it. Even the best companies might have a malfunction somewhere, so that can also be a problem.

As part of round two of the electric vs. manual standing desk debate, there’s a lot to cover regarding hand crank standing desks. It’s also known as a manual desk, so it’s the “manual” in electric vs. manual standing desk discussions. The most noticeable thing regarding this desk is the hand crank that sticks out like a sore thumb. In rare instances, this crane can get in the way of some other object based on how the desk is designed. Considering it’s a manual desk, there’s zero chance of an electrical malfunction or other technical mishap occurring. The crane can break down, but any half-decent carpenter can fix it as it doesn’t require a lot of technical knowledge.

Having the ability to be easily fixed is a huge boon to its name. It’s not only more accessible for repairing it, but it’s also cheaper, as the parts needed for a new hand crank are less expensive than any motor drive. However, the hand crank is not the only cheaper aspect; the whole desk is more affordable on average. As technology improves, so do the costs of an electric standing desk. Handcranks are primitive yet effective in keeping prices stable. 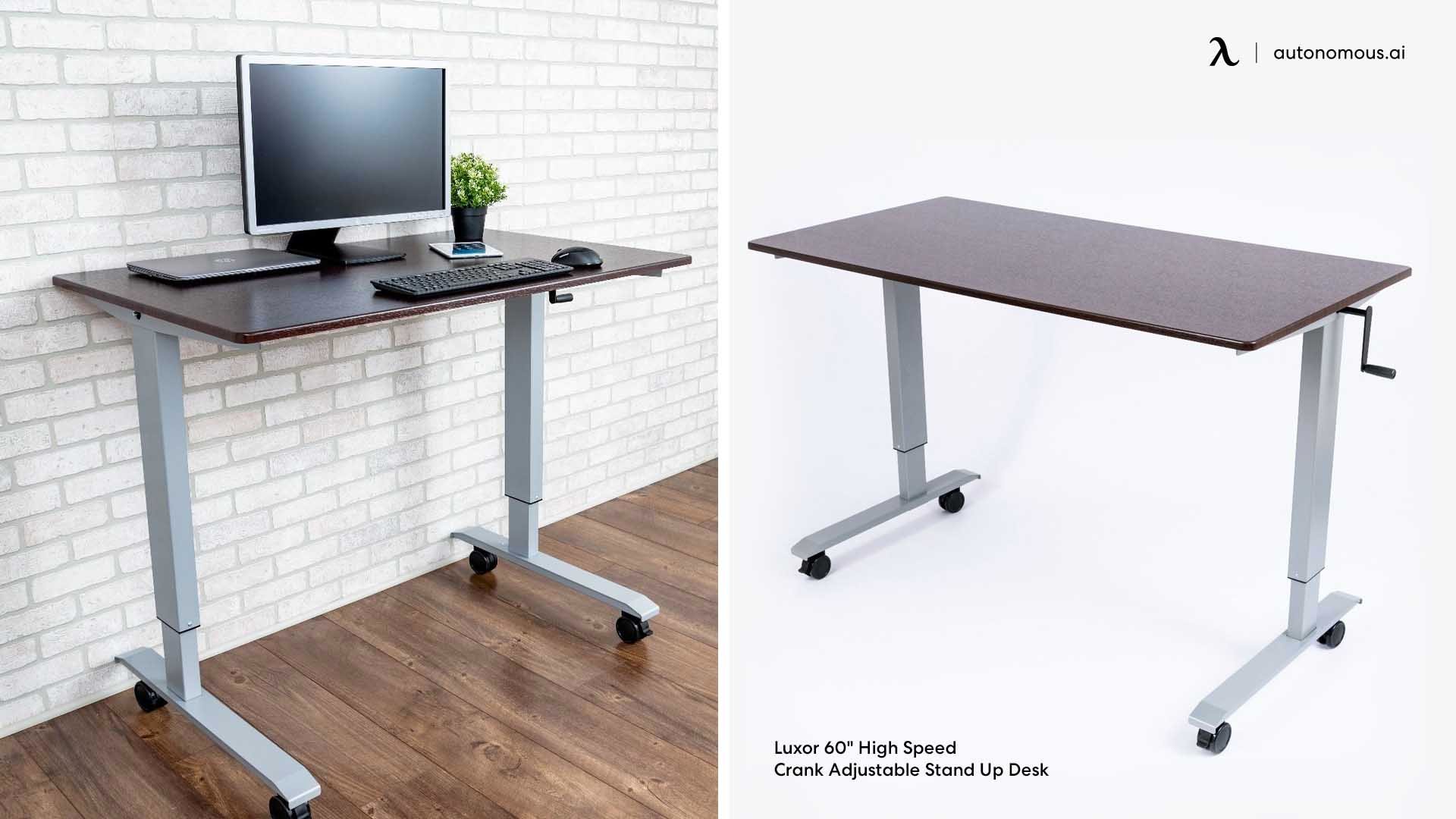 Finally, there is the topic of comparing it further with its electrical cousin. It can be briefly summarized as an affordable yet slower standing desk. For some people, the extra speed isn’t a factor, and they just want something cheap. That’s understandable, but keep in mind that future advancements in technology are going to continue making the electric standing desk more productive and useful. There may even come a time where the prices between the two aren’t a big enough factor for choosing which one to get.

Which One To Get?

This decision isn’t entirely a blowout; both desks have excellent qualities. Ultimately, the electric standing desk is the better option. The benefits of using an electric standing desk are too great to ignore! While it is true that the hand crank desk is more affordable, most people should be able to purchase the electric variant without much issue. An extra $100 or so won’t kill most people’s bank accounts, so all of the additional functions make it a more appealing product.

What about the physicality of the two? The hand crank desk indeed helps promote active living as twisting the crane back and forth can be intense for some people. However, most people don’t need to adjust their standing desk that often. It isn’t realistic to expect a person to lose hundreds of pounds just through their hand crank desk. While it can be a good workout, some people may only twist it once a day. Some days, they might not even adjust the height at all!

Therefore, if height adjustment is a minor concern, what else can differentiate the two? The electric version is more expensive, so why is it better? Here is why: its functionality is unparalleled. For the brief moments you need to change the height, it works significantly quicker and doesn’t require any effort. If you’re tired or have a lot of work to do, this simple function is more appealing.

That is not all, for it can also lift more weight because it’s electrically powered. If you’re a remote worker with a lot of paperwork and documents, you have significantly less to worry about when using an electric standing desk. Instead, you can choose to use it as normal. If you’re bringing your kids to work or you’re at a home office, you don’t have to worry about your kids’ weight crushing the desk. 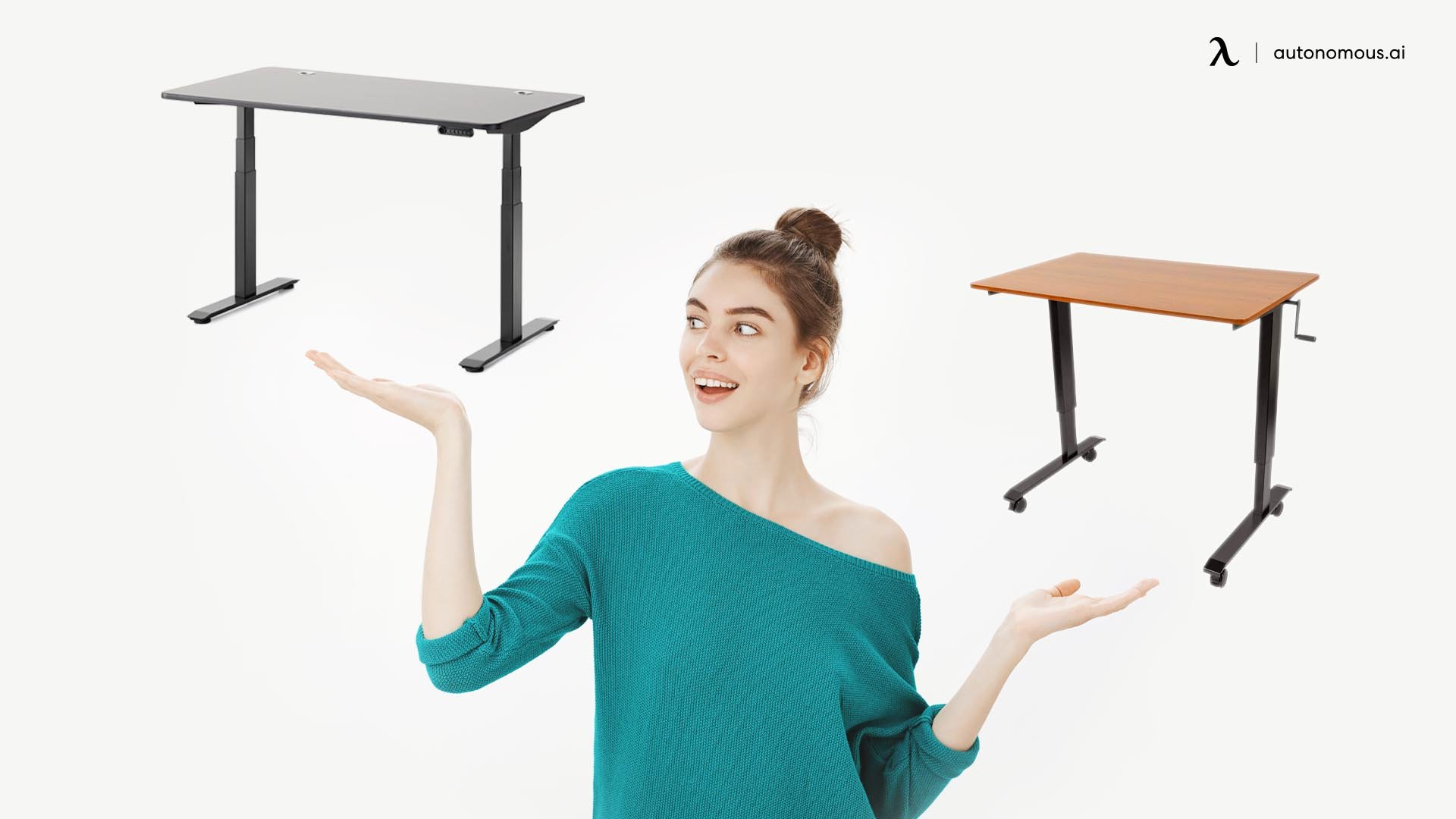 The final thing worth noting is app functionality. Electric desks tend to be more functional in this regard, as they can easily connect via BlueTooth or through another signal with your phone or tablet. By comparison, a regular hand crank desk can only use general apps (which electric standing desks can also use). You might be wondering, “What kind of apps are relevant to this discussion?”

Productivity apps are relevant to the electric vs. manual standing desk debate. If you’re more productive, you can work harder and faster. By working more efficiently, you can earn money and have more free time at your disposal. Due to this simple fact, electrical standing desks are the superior choice. These apps can also have bonus tips and other cool features, so check them out if you choose to get an electric standing desk. 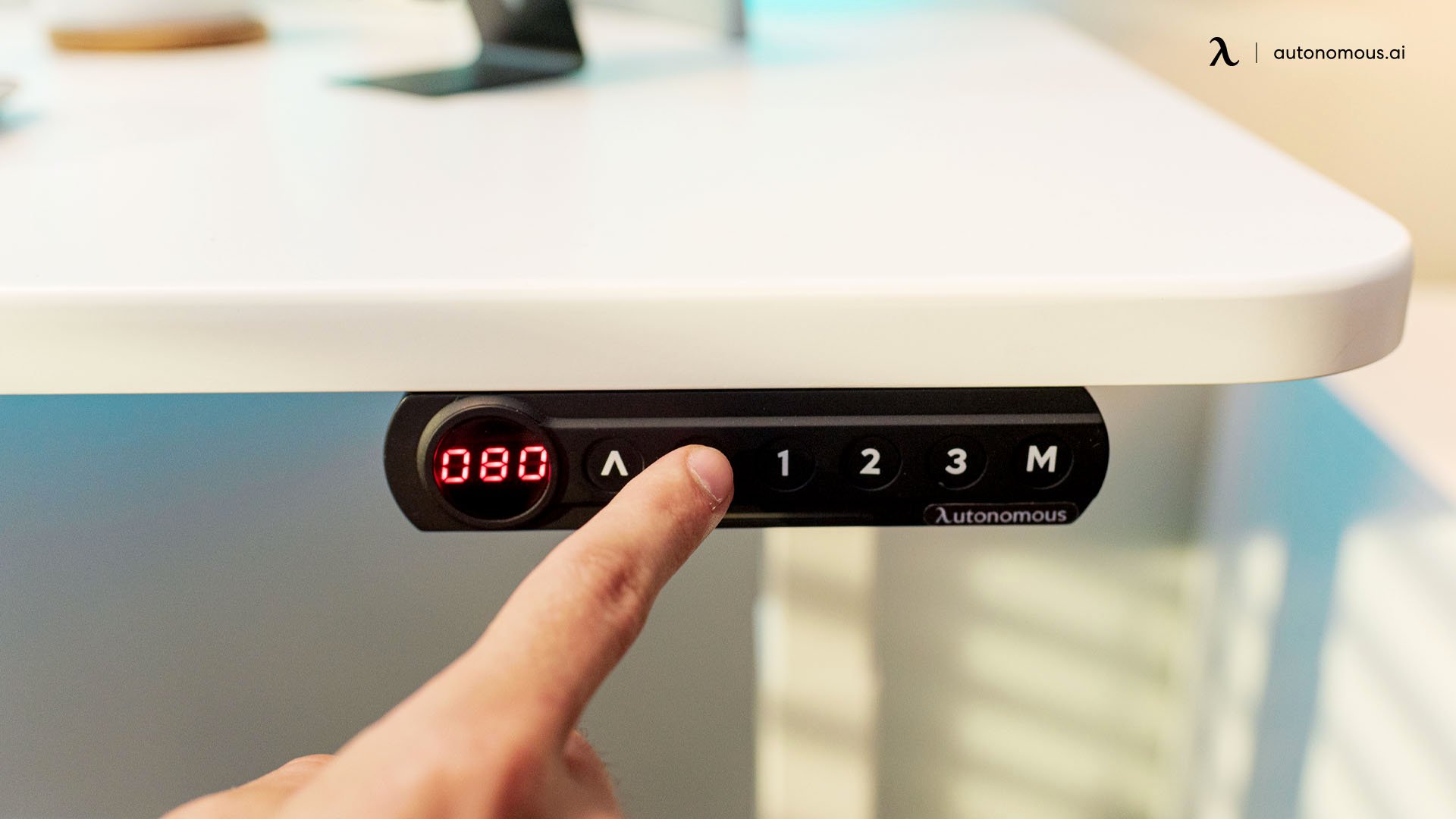 Of course, you can’t go wrong with either option. It’s just that the electric standing desk is more efficient, so you see more people selling that type more often. By now, you should have a deeper understanding of the two desk types and possess the ability to make your own decision.

Home
/Ourblog
/Electric vs. Manual Standing Desk: Which One Suit You Most