How to Adjust Desk Height and Create a Makeshift Standing Desk

With all the buzz surrounding standing desks, many people are interested in getting one and for good reason - they’re a great weapon for fighting the sedentary lifestyles that are plaguing workplaces. The benefits of working at a standing desk are pretty well-established, as they have been shown to encourage better posture, higher metabolism, a reduction in aches and pains and more productivity.

While having a standing desk at work is an attractive proposition, it also comes with the slightly daunting prospect of changing your daily routine and working habits. For those that are unsure and not willing to fully commit to a dedicated standing desk just yet, there are ways of dipping your toes in first with a few makeshift options.

This post will take you through the different levels of a standing desk, ranging from the ultra-basic temporary options to the top-notch feature-packed examples.

Let’s get into it. 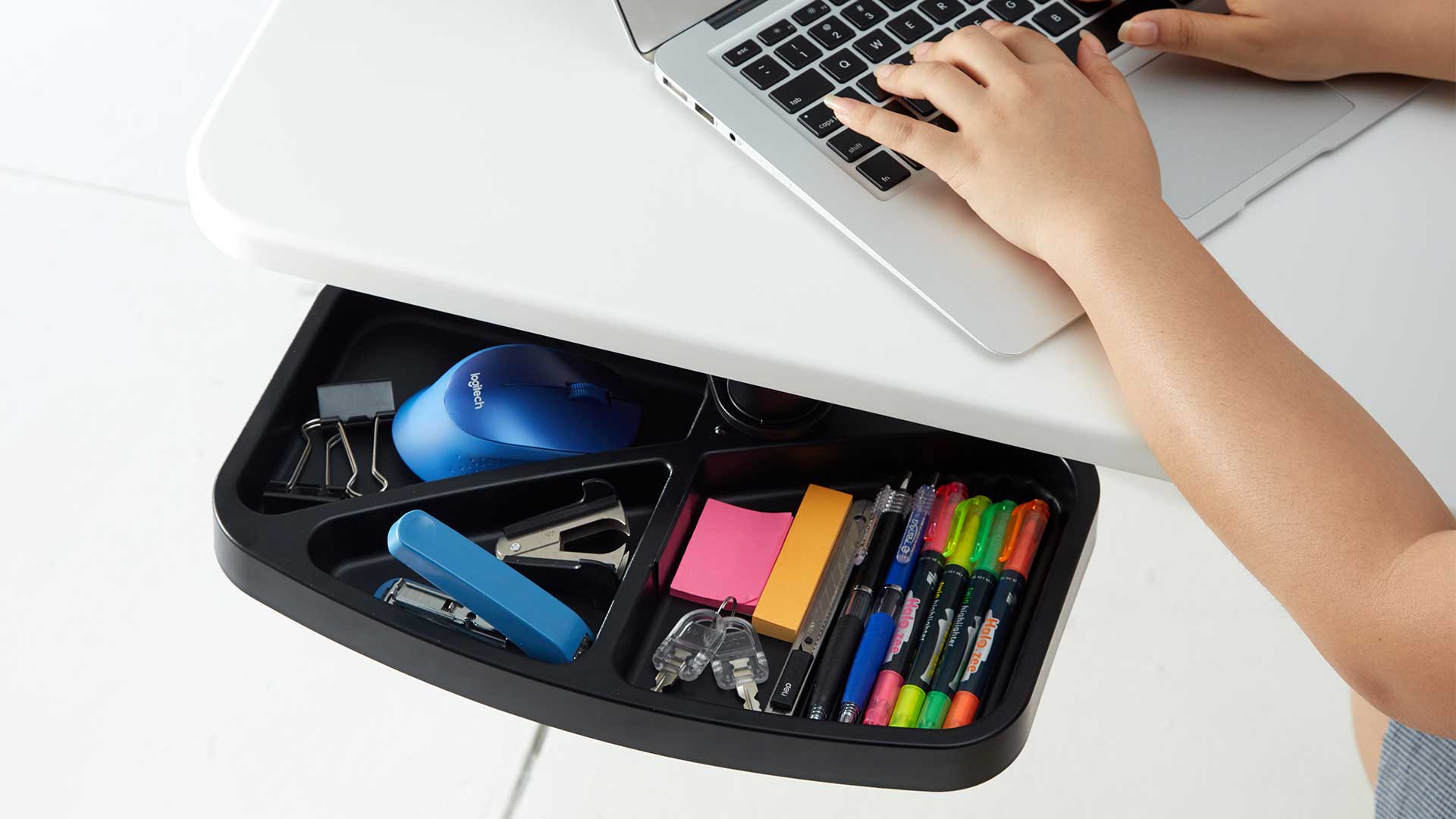 Starting with the most basic yet relatively tried and tested option, grab yourself a pile of books. No, seriously. If you don’t have any books available, use anything you can stack or will approximately replicate the standing conditions you want to try working in. The ultimate purpose is to bring you up to the height where you can use your computer comfortably at standing level.

To achieve the right height ergonomically, there are two important factors to consider. Firstly, your head should be level when looking at your screen or monitor - meaning that you should not be craning your neck up or down and into an unnatural position. Secondly, the positioning of your arms wants to ideally be at a 100-degree angle, with your forearm more or less level horizontally. This will give you an idea of standing comfortably while working at your computer.

While it can be a challenge to put something together from objects you have lying around your home, this is obviously a temporary fix and should only be seen as such. 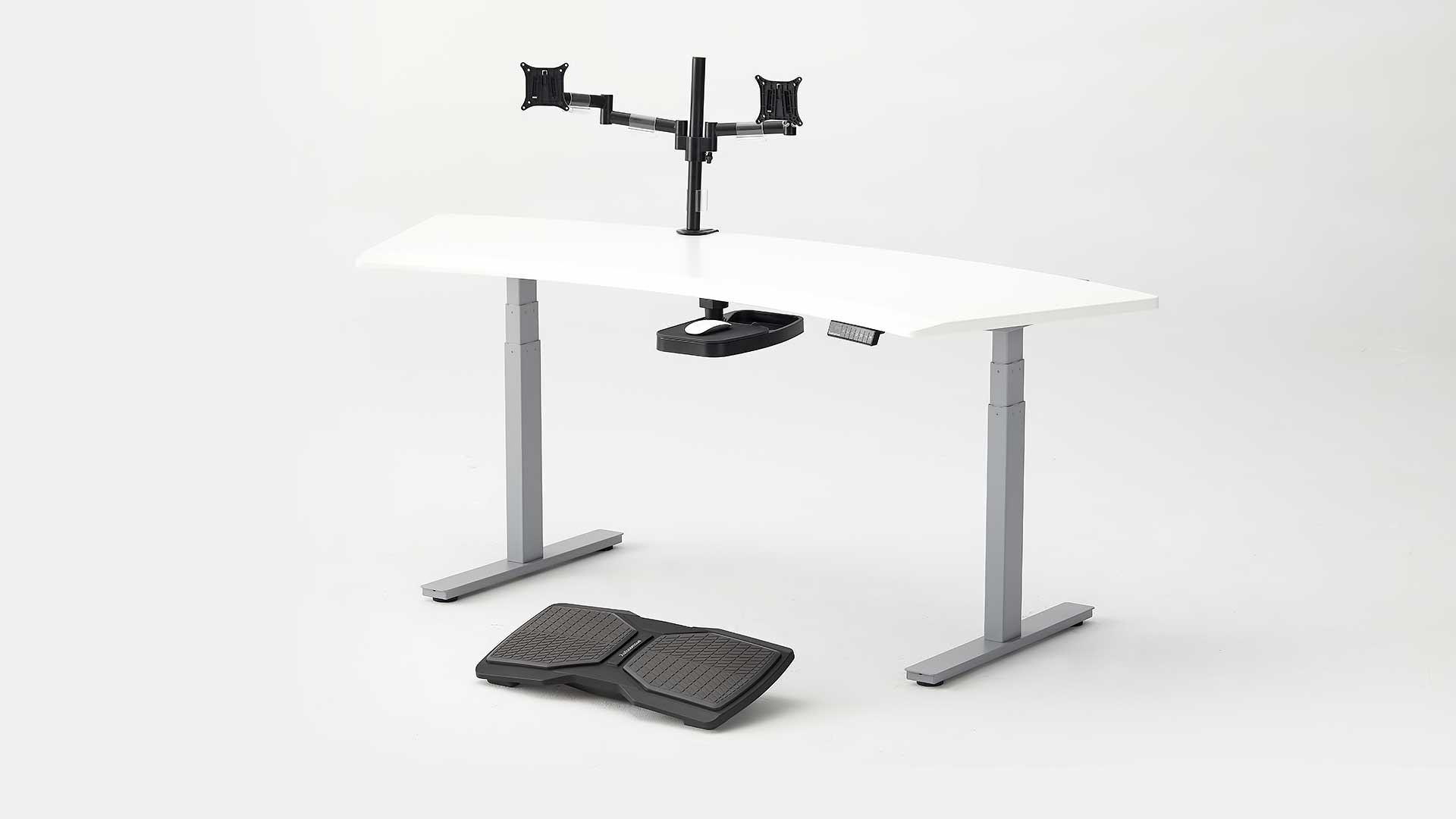 Moving onto actual pieces of furniture, let’s take a look at desktop desks. These are quite literally smaller desks that go on top of your main desk, converting it into a standing one.

It may sound like putting a hat on a hat but they are better than that and do have some application. These desks come in all sorts of different forms, sizes, and price points but will generally cost less than a dedicated standing desk.

There are two options to choose from, in essence. You can either go with a smaller, cheaper, more portable option or one that is larger, a bit more robust but a more permanent fixture.

The former is easier to move as they are lighter, meaning that you can take it off your desk with relative ease or use a variety of different surfaces as you see fit. However, the downside is that you aren’t going to be able to load too much equipment on it.

The larger, more solid options will convert your regular sitting desk into a standing one in a more complete and permanent way. They are often designed with different levels for various pieces of gear, such as a keyboard tray or a handy monitor shelf. These often look the part but what you’re left with is not going to be height-adjustable without a lot of effort.

In any case, this option is a compromise and you’ll have to decide which trade-off to make if you go for one. Desktop desks are never really going to be able to tick all the boxes, especially when it comes to adjustability. It’s highly unlikely that you’ll find one that will both allow you to easily transition between sitting and standing and be able to take a lot of equipment.

With that in mind, let’s move onto dedicated standing desks that are height adjustable.

Next on our list are the more mechanical options, which can be illustrated by the SKARSTA stand-up desk. This desk is height adjustable and is raised or lowered via a hand crank. This may sound like a good idea but the issue that arises from the hand crank mechanism is that the motion is anything but smooth. Considering that desks often have multiple items on them that you don’t want to go all over the place, like your coffee over your keyboard or your stationary on the floor, having to remove them all sounds like somewhat of a chore. Now imagine having to do that every time you want to go from standing to sitting or vice versa.

Another option for a manual desk is an adjustable standing desk that uses a lever-activated pneumatic cylinder to adjust its proper height, similar to how a typical office chair is adjusted. The benefit of one of these desks is that the movement is generally smoother than a hand crank equivalent, particularly when lowering.

The issue, however, is that these desks aren’t designed to lift a great deal of equipment and this causes two potential problems. You’ll either have to assist it yourself by exerting the required force to push it upwards, or you’ll have to take off any heavy objects that it can’t raise itself. Considering that you’ll want to raise and lower the desk to alternate between sitting and standing several times a day, you can imagine the inconvenience that might be involved.

So then, onto the most desirable option. 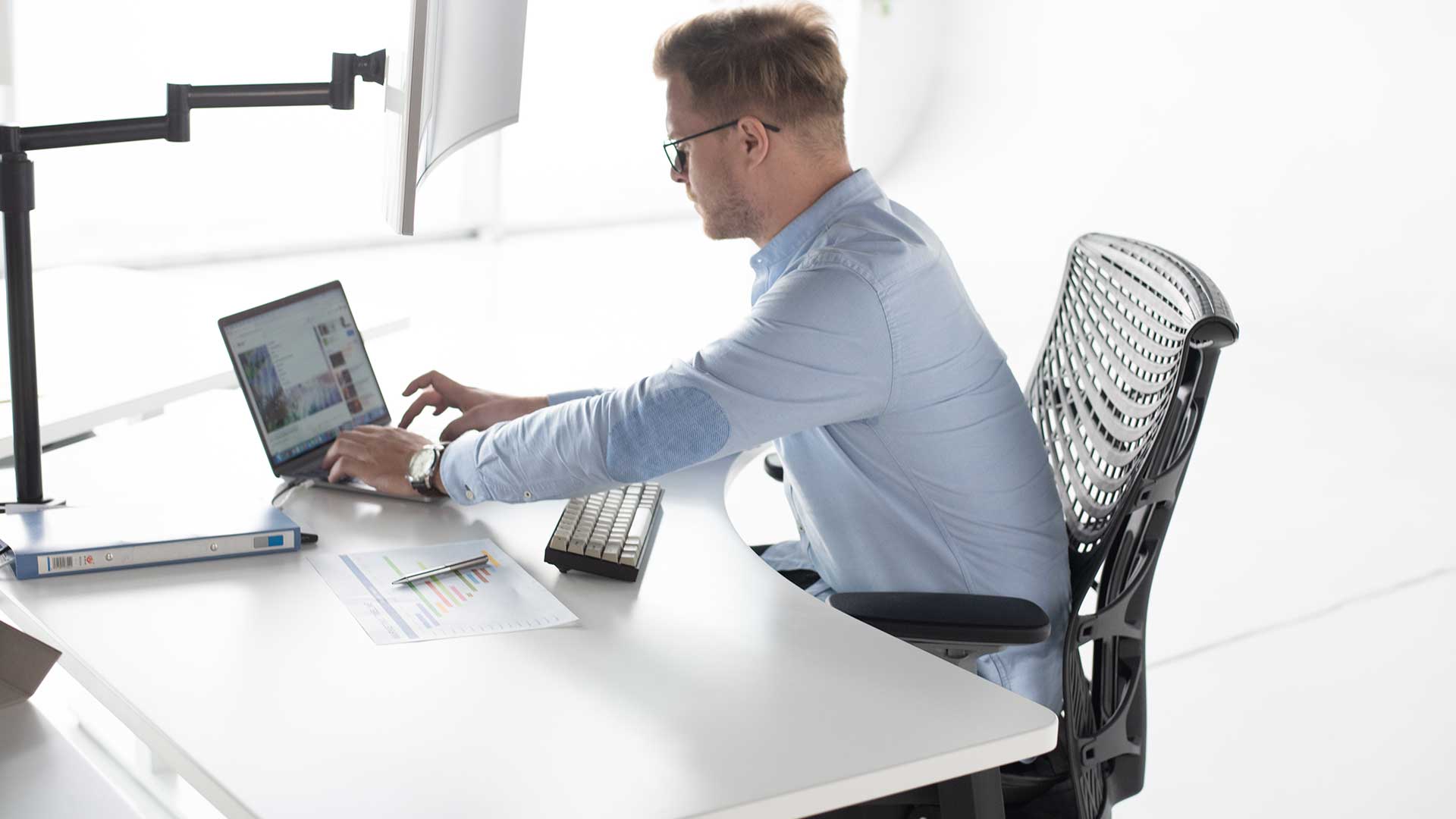 Frankly speaking, there’s nothing more convenient than simply pushing a button and having your desk raise or lower to the height you want. This is the wonderful reality of having a height-adjustable desk that runs off a motorized frame controlled by a keypad.

Let’s take the Autonomous SmartDesk Core as an example. The frame itself contains a dual-motor system for raising and lowering the desk and it does so quietly, quickly, and most importantly, smoothly - none of that juddering business that you get with the hand crank. It’s also capable of moving 300 pounds of equipment, so there’s never any need to take things off it before you want to sit or stand.

The desk is all controlled by its keypad, which as you can see has seven buttons. One for lowering, one for raising and the rest allow you to program your own height presets. You can have up to four presets locked in at any time, which comes in handy if you share your desk with someone else - you can both have your preferred sitting and standing heights programmed in, so switching between them is pretty seamless.

If you’re interested in an adjustable standing desk, there are only two reasons that might compel you to choose an option other than a motorized desk. The first could be that there is no reliable source of electricity where you work, which would render the desk unable to move. Secondly, your budget isn’t there right now and you don’t have the $429 for a SmartDesk Core - if that’s the case you could opt for the monthly payments or just simply save up for a little longer.

It needs to be said that the issue with the makeshift desks, desktop desks, and manually adjustable desks is that they are compromises - they do not give you the full functionality or a user experience that doesn’t have at least one glaring downside. As a result, they can only really be seen as placeholders before you take the plunge and get the real deal.

The question you should be asking yourself is this - why would you waste any time, money or effort if you don’t need to?

10 Exercises for You to Do at Your Standing Desk

12 Tips for Using Your Standing Desk Like a Pro

Standing Desk With Treadmill vs. Without: Which One is Right for You?

What Is The Best Shape For An Adjustable Standing Desk?