What Is Standing Up Meeting & How It Boosts Productivity?

A standing up meeting, sometimes called a stand-up meeting, is a ritual for many teams now. They’re excellent to keep the company aligned and focused. Though they aren’t hard to implement, it can be tough to make the most of them and requires practice.

However, you’re probably wondering, “what is a stand-up meeting, and why do you need one?”

What Is a Stand-Up Meeting? 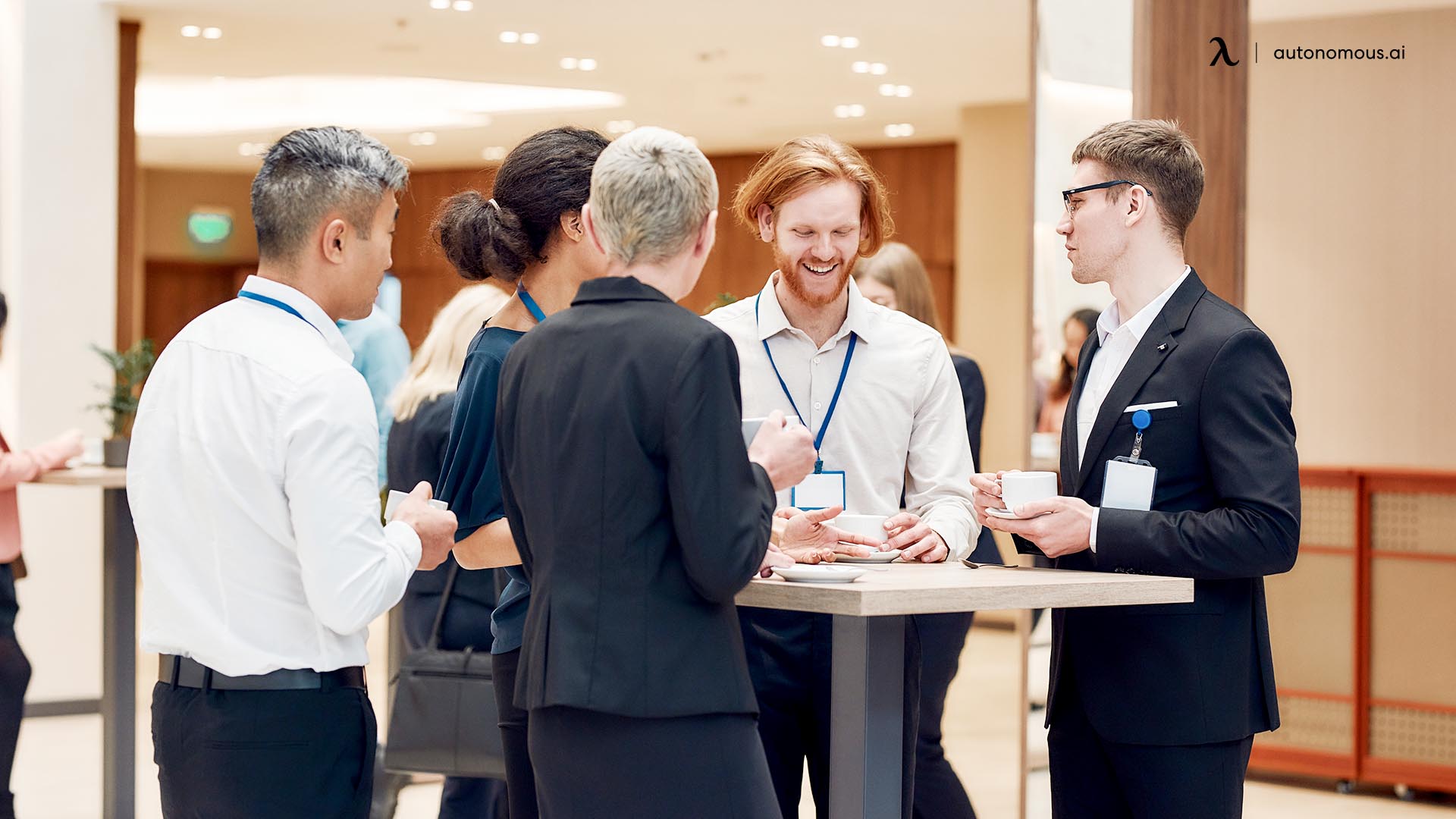 The standing meeting meaning in Agile indicates that you have a short chat between the team, and it’s all done on foot. You’re all there to go over specific tasks that are in progress, finished, or about to start.

Sometimes, it’s called a daily stand-up, but the goal is to use the methods and frameworks relating to Agile. They’re typical primarily for software development teams, but they have gained popularity in other work fields, such as product development, project management, marketing, and more.

Many people wonder, “is standing better than sitting?” The answer is almost always a resounding yes.

When you hold a short standing-up meeting, you get a fresh look at things, and it’s more effective than a traditional sit-down meeting. Most people dislike those because they are drawn out and boring.

It’s important to note that standing makes meetings more productive, too. Sometimes, though, you might need an office standing desk to help you achieve your goals. If you’re looking up stats or need to show something on the computer, a standing meeting table makes it easier to do.

Research has shown that meetings are increasing in frequency and length over the past five decades. Executives spend almost 23 hours a week in meetings, which is far too much for most company needs.

Typically, meetings go off course quickly, so even if there’s a specific agenda, it’s easy to go off on tangents. This leads to wasted energy, time, and reduced productivity.

How to Perform a Daily/Weekly Standing Up Meeting 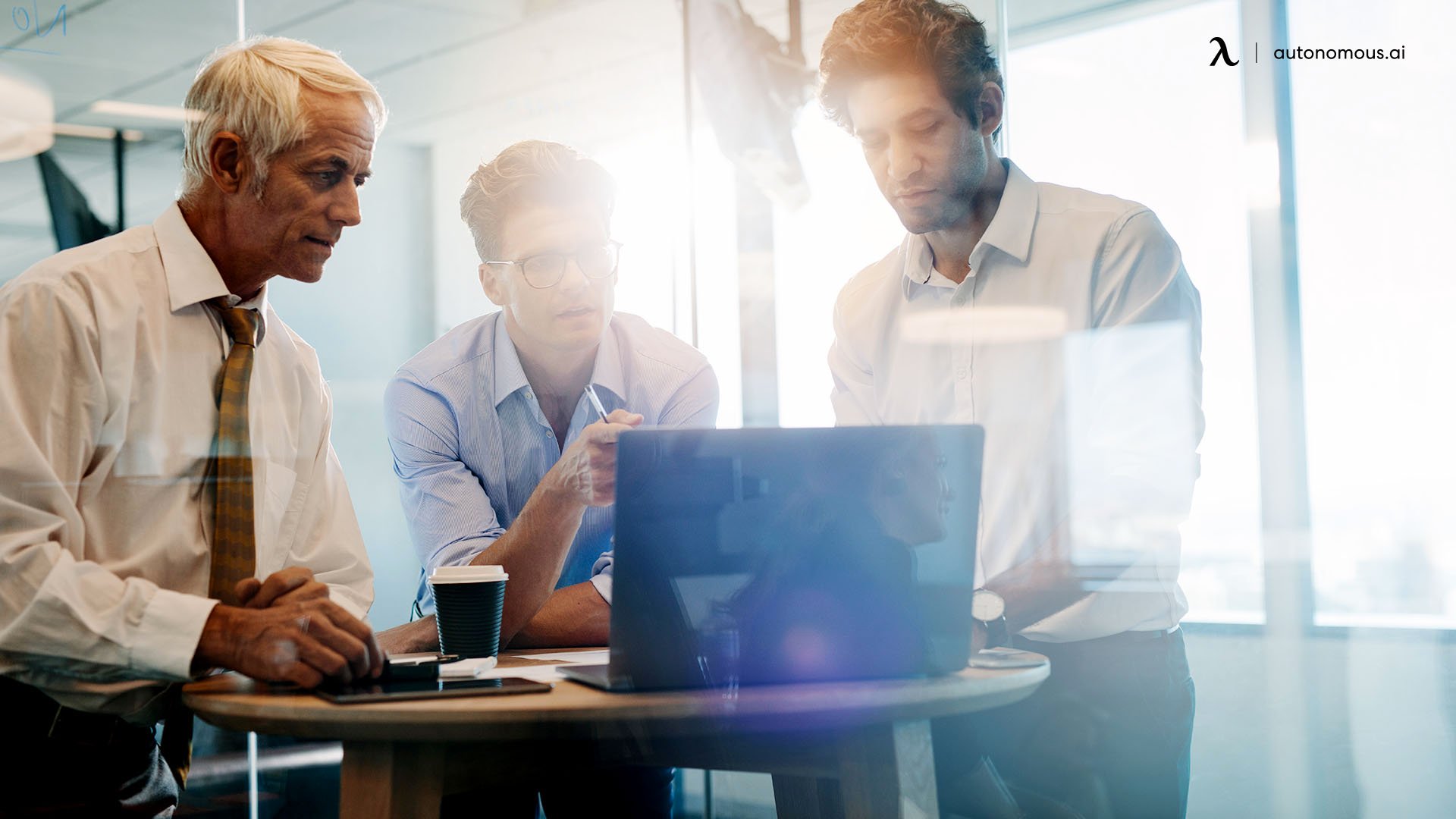 A standing-up meeting is more efficient for the team, especially as a round-up meeting. When you conduct it, you should focus on conciseness and to the point. It’s often easier to achieve that because no one wants to stand for long periods of time.

However, many companies are using sit-stand sessions to help people get the benefits of standing and reduce the negative effects of sitting all day. 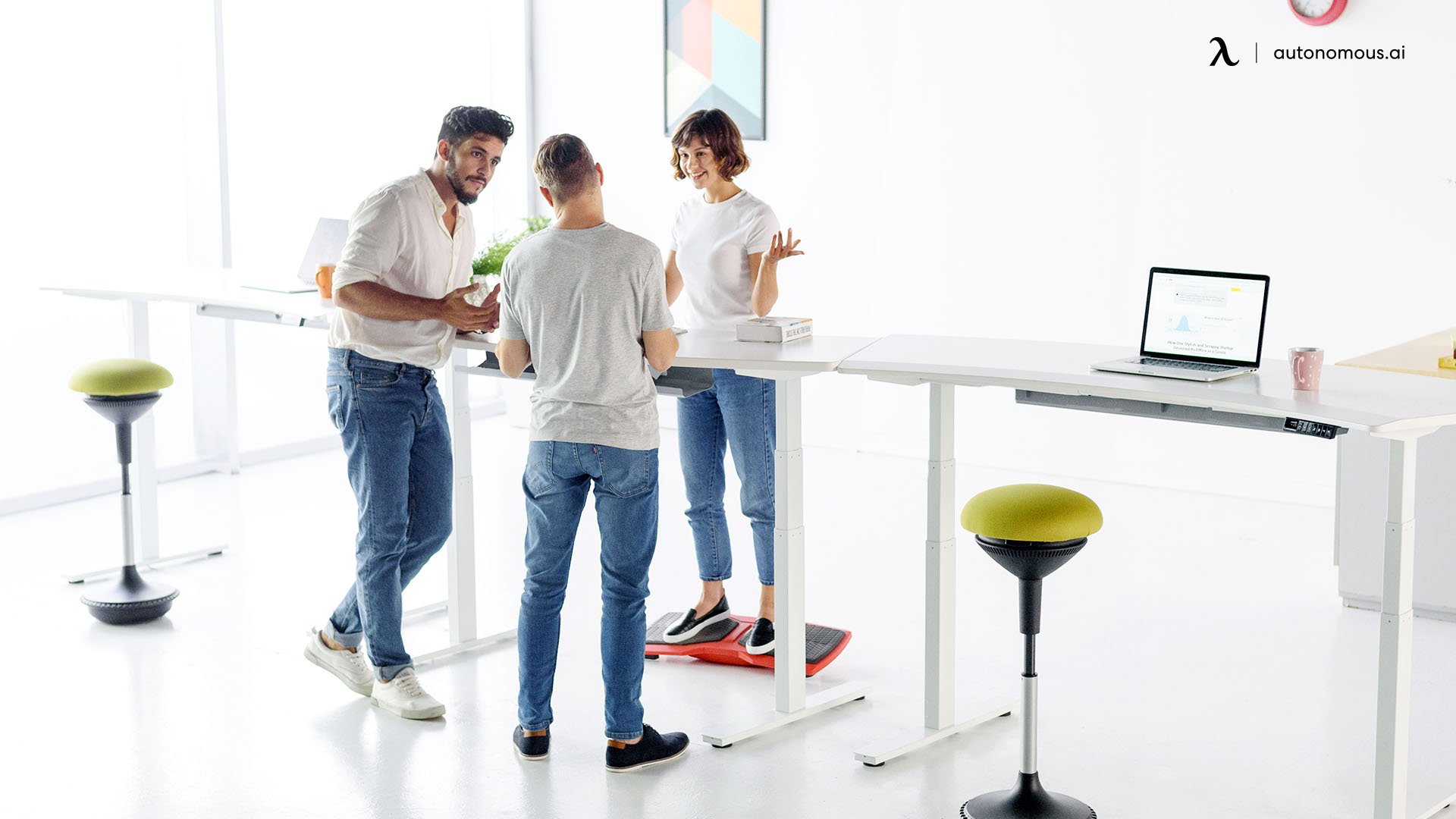 Usually, anywhere from five to 15 minutes is a good amount of time.

The first step is to choose a time for your daily standing-up meeting and make it a recurring appointment. Each person must attend, and it’s best to schedule it around the beginning of the day. That way, you can all sync up your plan and reduce communication issues.

At the beginning of your meeting, gather around the Kanban board. You can focus on the people or the process, which is the most popular for Kanban.

To focus on the team, each person there should answer three questions regarding workflow. These include:

This works best for teams that don’t visualize their workflow. With a Kanban board, you don’t have to explain what you did yesterday because it’s visible to everyone.

If you go with the process focus, you should focus more attention on what’s slowing down progress. Look at blocked cards, and figure out how you can deal with impediments.

You don’t have to use a Kanban board, but the process focus is the best. That way, you all know where you’re at and how to get to the goal.

It’s important to note that standing at work has many benefits. When you get a standing meeting desk, you can fully appreciate the standing meeting meaning. With it, though, it doesn’t wait for anyone.

When the meeting is supposed to start, it goes. Don’t tolerate lateness and focus on ways to motivate the team to be available at that time.

How Can a Standing Meeting Impact Work Productivity? 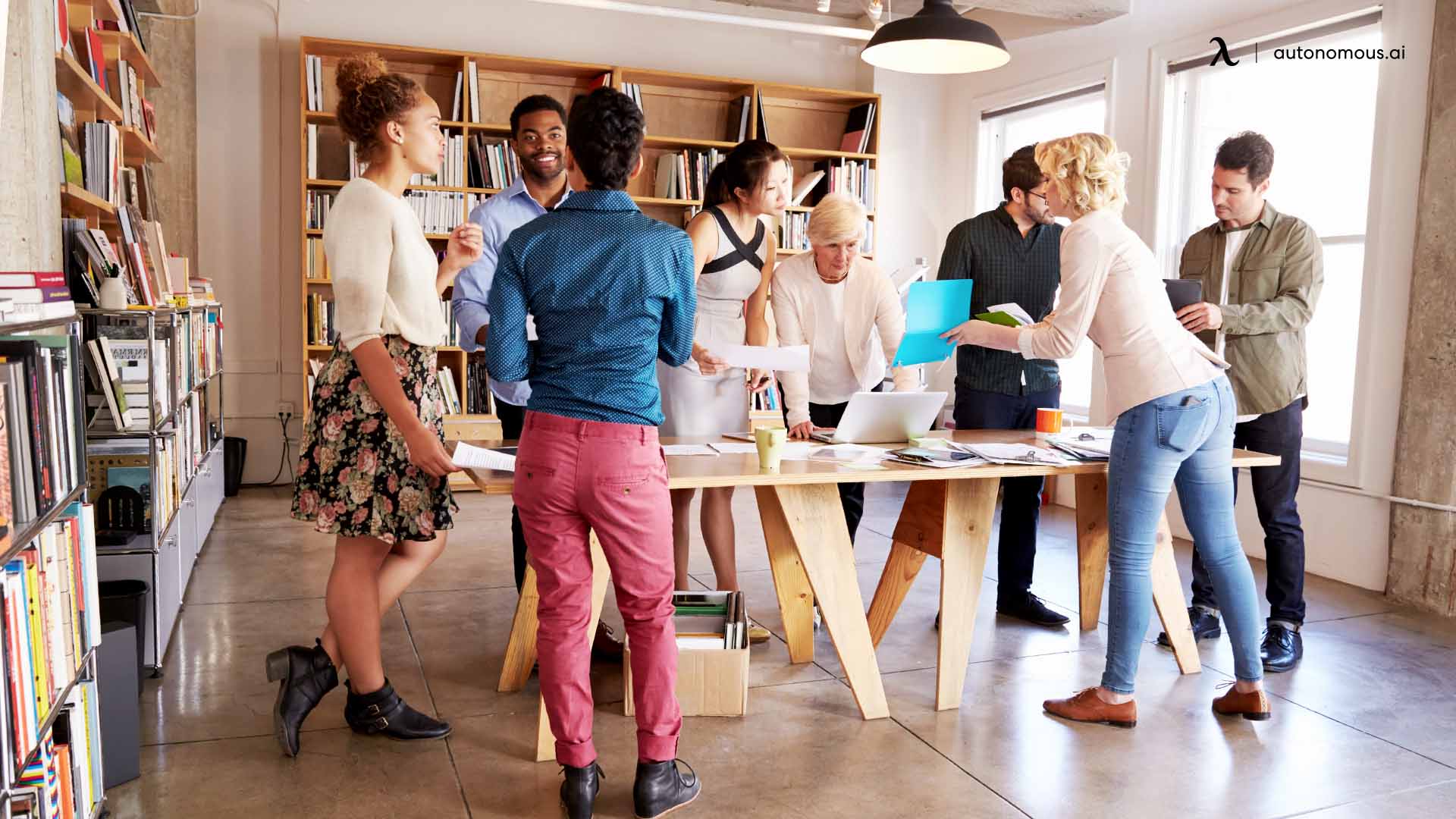 Clearly, a standing-up meeting is shorter, and they should be more focused. Therefore, you can get in and out and back to what you were doing before. Yes, you have to stop what you’re doing to attend the meeting, but look at it as a way to find out how projects are going and get appropriate information.

Typically, participants are more engaged when they’re standing up. How often should you get up from the desk? This depends on various factors. Those without a standing desk might use that time to get a break and stretch.

Having a standing meeting table is a good idea, too. Everyone can hang around it, and you still see improved team communication. Everyone gets to catch up on what they’re doing. It’s easy and effective, but it boosts communication so that there isn’t confusion later. Standing also creates a casual atmosphere, which indicates a comfortable environment where everyone can contribute, and people don’t talk as long.

Standing makes meetings more productive because it’s healthier to stand up. Many studies have been done on the effects of sitting for too long. If you don’t have standing desks, you can at least have a standing meeting desk where everyone comes together.

In fact, standing up meetings are a great way to add more physical activity while at work. When you’re standing, you’re probably moving around, shifting your weight, and all the rest. This relieves discomfort in your back and neck, but it also combats serious health issues.

Since people are comfortable because they’re using a standing meeting desk, they can concentrate more on what they’re doing, which boosts productivity.

Along with that, there are walk-and-talk meetings, but these are more effective for one-on-one needs. If you have a large group, those at the back aren’t likely to hear everything. However, they can all gather around the standing meeting desk with ease. 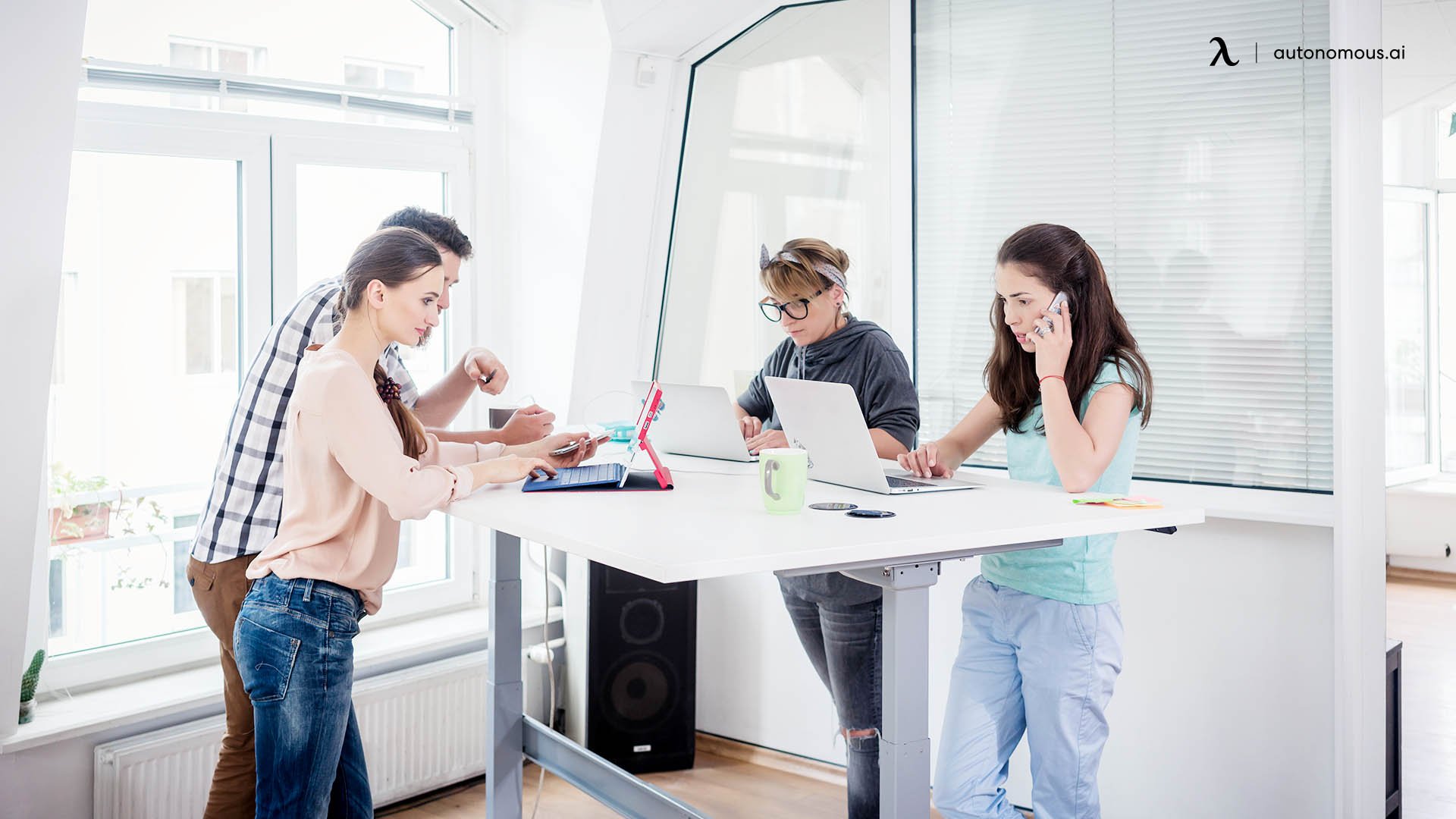 The standing-up meeting is highly popular for Agile practices. It helps people achieve alignment and keeps everyone moving in the same direction.

Typically, each person gets some relief from sitting all day, and they can also collaborate and work out any kinks with the project. What is a stand-up meeting? It’s where everyone meets at a standing meeting desk and talks about specific points relating to their project.

‌
Home
/Ourblog
/What Is Standing Up Meeting & How It Boosts Productivity?