Which Wireless Gaming Mouse Is the Best? 20 Best Options

You will know when you have come across the best wireless gaming mouse because it will provide you with precision without those tangled wires clogging up your desk. Gone are the days of incessant tugging from a mouse cable in the midst of your greatest battle or pullback when you accidentally move it outside your usual space. The keyboard’s edge will also no longer be your worst enemy. Therefore, the best wireless gaming mouse will serve up a snag-free, buttery smooth, clean gaming experience for all.

When it comes to deciding which wireless gaming mouse is the best, your decision should be based on the same criteria as it would when you bought your wired gaming mouse – How many buttons are you going to need? Are you right-handed, left-handed, or ambidextrous?

Additionally, you also may want to ask yourself more specific questions regarding your next wireless computer mouse purchase, for example, how good is its battery life? You do get some wireless gaming mice that are rechargeable, but others will use standard batteries.

Pros of a Wireless Gaming Mouse

Wireless computer mice tend to offer superior comfort that a wired mouse just cannot match. As already mentioned, wireless mice have no resistance or cable drag when you move them, and your hand has much more freedom. Unrestricted movement usually means faster flicks and smoother tracking during gameplay. The speed difference between a wireless and a wired mouse is no longer a factor like it used to be. Nowadays, the best wireless mice can just about match or function at a speed faster than their biggest wired rivals. Signal interference is also much less of a problem, but that will be determined according to the type of wireless mouse you are using.

A modern wireless mouse will have a longer range than that of a traditional wired mouse. Thus, they are an excellent choice for those who tend to sit at a distance from their screen or have their PC connected to a TV. Due to the fact that a wireless gaming mouse does not have cables that can get snagged or tangled, they are usually a better choice for those who are on the road often. Though, it is important to keep in mind that, sometimes, a wireless computer mouse will charge using cables or a docking station, which can be very costly to replace if they happen to get damaged.

Cons of a Wireless Gaming Mouse Having stability is key when it comes to gaming, and this rings especially true for those gamers that indulge in first-person shooting or any other game requiring the constant movement of their mouse. A mouse losing connection for just a short second may, very well, be the difference between losing or winning a match or battle.

In terms of a stable connection, a wired mouse tends to be more stable than a wireless one. This is because they are connected directly to your computer; therefore, there is no chance of interference from any other devices, and the last of your worries will be about whether or not your mouse has a connection.

However, wireless mice are improving constantly, and a stable connection is becoming less of a concern; for now, though, it may still be a determining factor. Manufacturers of the top gaming mice use in-house technology to eliminate interference. These technologies have ensured that a wireless mouse can have a fast response time with no latency.

All wireless gaming mice have a battery life that will, at some point, run out. Some wireless mice have rechargeable batteries while others will use replaceable batteries. Regardless of which one you choose to use, there is always the possibility that the batteries may run out during your play.

To avoid this issue, however, many wireless mice do include a USB cable so that you can charge while you play. While this may prevent the issue of your batteries dying, it does introduce some cable drag.

Nevertheless, thanks to the advancements in computing and electronics from Autonomous, Logitech, and many other tech supply companies, a new generation of speedy, wireless mice have been introduced to the market. These wireless gaming mice deliver only the best battery life and have highly accurate sensors, while the intense competition makes for the introduction of several clever and comfortable designs as well. The R-Go-Tools Bluetooth Vertical Ergonomic Mouse is a suitable Bluetooth gaming mouse for every gamer or worker. Specifically, this ergonomic mouse has a vertical position and is available for both right and left-handed users. This vertical position allows your hand and wrists to stay in a natural, relaxed posture throughout your gaming experience, as you are stimulated to move the mouse from your forearm, rather than your wrist. In other ways, the Bluetooth gaming mouse also has a round shape and will fit comfortably in your hand while still supporting all of your fingers. 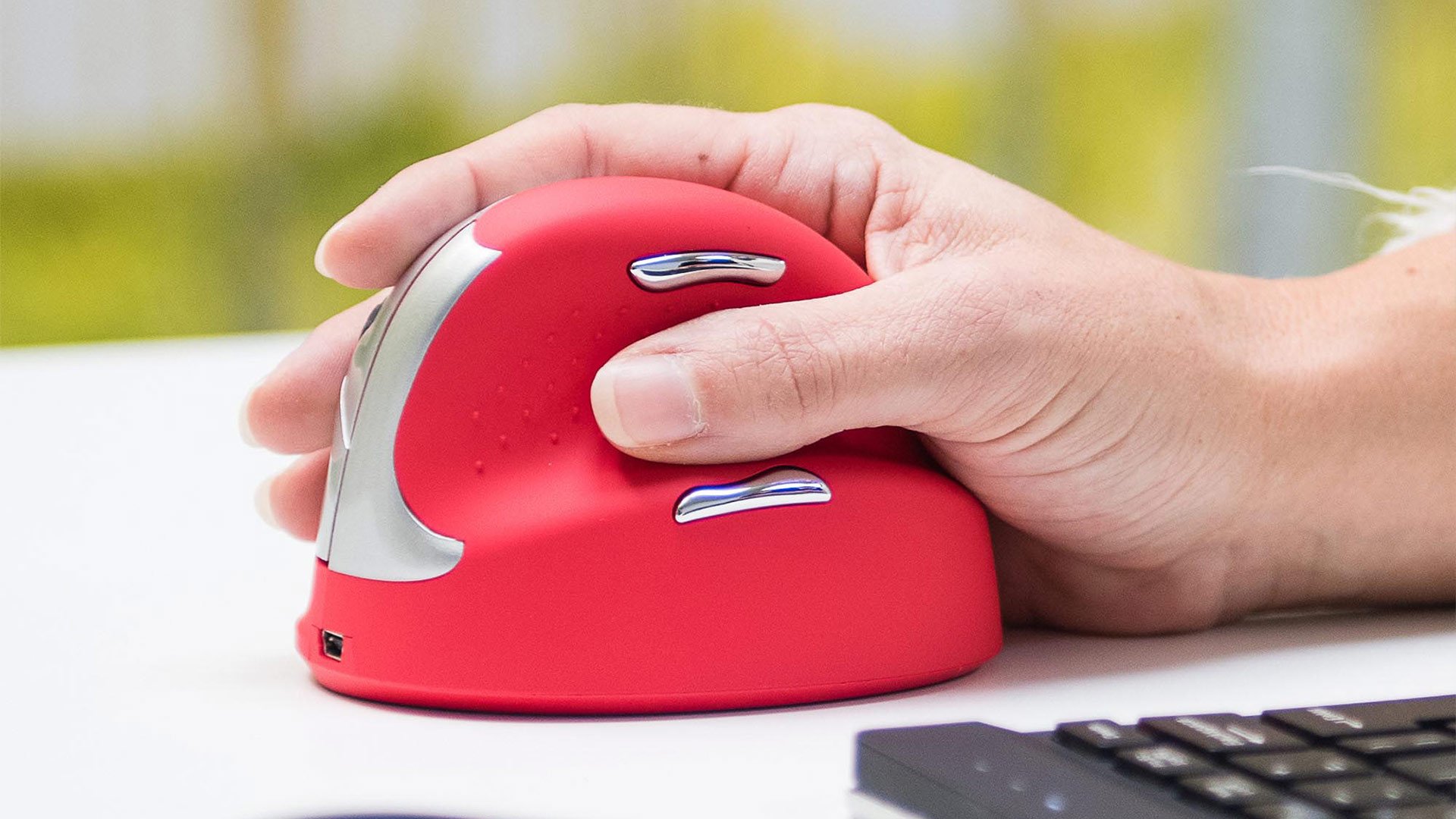 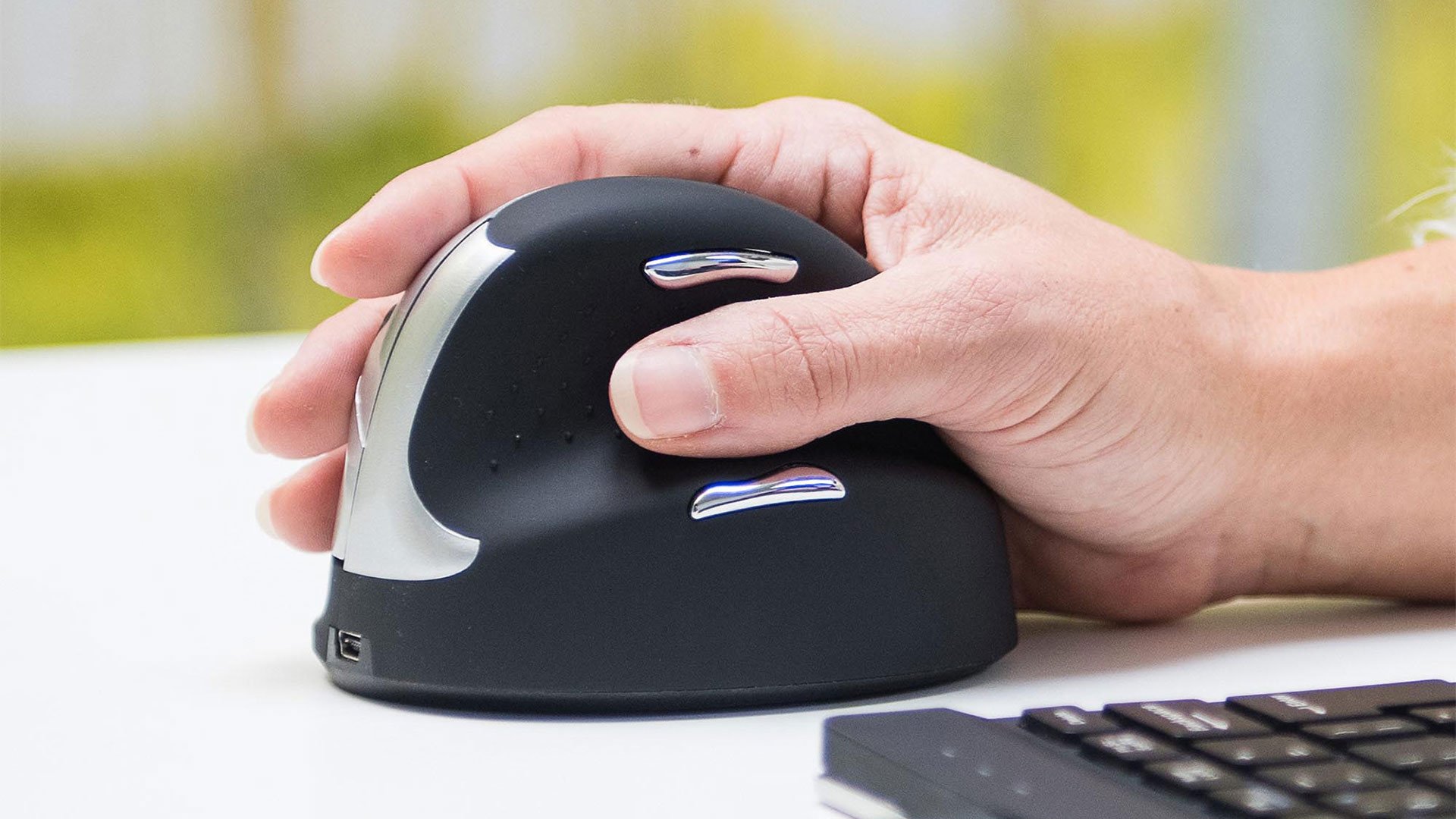 The ergonomic R-Go HE mouse has a round shape that provides a natural, relaxed position for your hand and wrist. The vertical position stimulates the mouse movement from your forearm.

The G502 Lightspeed Wireless is the most recent re-introduction to a long-standing favorite among the fans of Logitech, which is called the G502 Proteus Spectrum. This wireless gaming mouse’s core is its sensor, making it deadly accurate for those who indulge in competitive gaming. It also won’t stutter or drop tracking while you are wildly sweeping it across the mat, thanks to its rated 400 IPS.

Logitech boasts that its latest iteration delivers one excellent performance and is up to ten times more power efficient than its previous generations, making it one of the many options for the best wireless mouse for gaming that you can buy.

The Corsair Harpoon RGB Wireless has been on the market for quite some time, primarily due to the fact that nothing about this wireless gaming mouse needs changing. It is a small and relatively straightforward mouse that costs just less than $50. However, even with its affordability, the Corsair Harpoon RGB Wireless still delivers extra buttons, a comfortable grip, and a full-featured performance.

You can switch between Bluetooth and USB connectivity, and it can even get up to 60 hours of battery life. If this Bluetooth gaming mouse had any missteps, it would be extremely difficult to categorize them. The Corsair Harpoon RGB Wireless really is one of the best deals in the wireless gaming mouse space. This is definitely a food choice for your ultimate gaming setup. Coming from a proud tradition of the Razer DeathAdder mice is the Razer DeathAdder V2 Pro. With its robust functionality and robust design, it is of no surprise why this wireless computer mouse is a top buy among gamers.

If you have never used this mouse or heard of it, then you should know that it is almost like a template for a modern gaming mouse due to its ergonomic shape, robust software, and a handful of programmable buttons.

While the Razer DeathAdder V2 Pro may not be one of the fanciest wireless gaming mice out there, it is certainly intuitive and not that expensive either.

The SteelSeries Rival 3 Wireless is hard to beat when it comes to a small and simple gaming mouse. Costing less than $50, it also makes for an incredibly good deal among the best wireless gaming mouse on this list. If you want an unbelievably lightweight gaming mouse, then the Logitech G Pro X Superlight is the right choice of a mouse for you. While the G Pro X Lightweight weighs just around 2.2 ounces, it also packs an accurate sensor, a ton of performance, two nicely placed thumb buttons, and an ergonomic design.

The Logitech G Pro X Superlight is pretty expensive, but it is also worth its weight in gold. It also happens to be nicely pairable with a gaming keyboard and mouse tray combo.

Most of the wireless gaming mice on the market today have been designed with large batteries and large hands in mind. However, that is not the case with the Razer Orochi V2, which is an extremely small peripheral that pairs nicely with a gaming laptop.

Its small size means that it can comfortably fit into laptop bags and backpacks, and the most obvious of them all, your small hands. The Razer Orochi V2 also supports palm and fingertip grips, which is not common to every other gaming mouse. Those who want their desktop to be completely wireless should turn their attention to devices that also charge wirelessly. One of the few gaming mice that offer wireless charging is the Corsair Dark Core RGB Pro SE, and it charges pretty well. The battery lasts for about 50 hours, and you can choose to use the mouse in either Bluetooth or USB wireless mode. This mouse is also not the most expensive either, coming in at less than $100, it makes for one of the better deals in the wireless gaming mouse market.

However, unlike most other MMO gaming mice, it also has swappable side panels for those who prefer a two-button or a six-button setup instead. With that being said, the Razer Naga Pro is surprisingly an extremely versatile tool.

Other options for a good wireless gaming mouse include the following:

13.  Razer Turret for Xbox One

To Wire or Not to Wire?

As you can tell, there are plenty of brilliant and affordable options for those wanting the best wireless gaming mouse. Whether you are after our favorite, the R-Go-Tools Wireless Vertical Ergonomic Mouse, or any of our other 19 options, these wireless mice have got your gaming experience covered.