UP TO 7-YEAR WARRANTY
Autonomous

“They don’t wanna hear it…”

The way that scientific information makes its way from the “conclusions” section of studies in peer-reviewed journals to headlines on news sites and all the way to listicles on blogs is like a game of “telephone”.

It starts, for example, with a group of researchers from the University of Exeter creating a breakthrough molecule called AP39, which delivers hydrogen sulfide to mitochondria in epithelial cells. It helps the cells stay alive by controlling inflammation, potentially preventing an array of fatal diseases.

This discovery becomes the Science 2.0 headline “AP39: Fart Smell Compound May Prevent Diabetes,” which morphs into the Huffington Post headline “Smell Of Flatulence May Reduce Risk Of Cancer,” which then becomes “Could sniffing flatulence be GOOD for you?”

Let’s just clear this up: NO. Our cells use tiny amounts of hydrogen sulfide for cellular signaling (communication within the cell); the bacteria in your gut also emit hydrogen sulfide during digestion of certain foods. Not the same thing.

So, what about sitting versus standing. Is Sitting The New Smoking? Or maybe Sitting is NOT that bad for you and not ‘the new smoking’? But A Standing Desk Can Add Years To Your Life. So what about Experts Say Your Standing Desk Is Basically Useless? It seems that the popular tone about standing desks has shifted from panacea to placebo to Stand To Work If You Like, But Don’t Brag About The Benefits.

Bite-size facts are great. They’re perfect for eye-catching headlines that make readers feel they have learned something just by glancing at it as they scroll. The truth is that the scientific method is not intended to prove a theory right. If the theory holds, then it’s not wrong…for now. Without an overwhelmingly conclusive body of evidence about how standing desks influence our health and productivity, we’re still just playing telephone with disparate conclusions in the echo chamber of the internet.

(Find our blog on Medium.com here. We like to read and ❤ your stories, too!)

Let’s take a step back from the research about standing and sitting, then, and start from a few much less murky premises. There is indeed an overwhelmingly conclusive body of evidence that a sedentary lifestyle (not necessarily just sitting while working) is a major contributing factor to the current leading causes of death worldwide (heart attack and stroke).

Equally as clear is that the number of people struggling with mental health issues has risen astronomically — and not only in the United States — in the late 20th and early 21st centuries. Whether or not that’s because of the “pharmaceutical revolution” and an increase in awareness or it’s truly a new phenomenon — it is undeniably a pandemic.

Ok. What does this have to do with Family Guy and standing desks? Health and productivity trends come and go. Many of them are absurd. (Grapefruit juice and olive oil liver cleanser, anyone?) Often they rise and fall along the pattern described above: “it’s a miracle! Wait, it’s bullshit. Alright, well, to each their own.”

Only a few generations ago infectious diseases were the leading cause of death worldwide. We moved through that phase of human history not only thanks to miraculous inventions such as antibiotics but also because the public became more aware of how germs work. In the simplest terms, people learned to wash their hands.

If a sedentary lifestyle and dying of heart disease today is analogous to poor hygiene and dying of an infection two hundred years ago, then maybe something as simple as “stand up more” could really be part of the key to leaving rampant heart disease and obesity behind. To move more, we have to challenge the assumption that you have to sit to work.

Similarly, the suicide rate in the United States has risen 24 percent over the last 15 years. Work-related stress and the lack of a sense of autonomy over our work lives are both major contributors to poor mental health. Do we have to be miserable to be successful? Are we lazy if we’re not stressed to the max? Are we all-around failures if we’re struggling financially?

So, sure, a review of the research about standing desks could be called inconclusive at this point, but this isn’t really about standing desks. It’s about the opposite of a health trend. We try not to take ourselves too seriously here at Autonomous, so in spite of the risk of sounding self-important…this is about a paradigm shift. How are we going to find a way to see being active and stressing less as something as important as not getting a staph infection?

No one person has the answer to how we’ll do this; we’ll have to do it together, one step at a time. And, because we’re humans, we’ll do some ridiculous things along the way:

(We would never bash the treadmill desk but, you have to admit, this is hilarious.)

Take, for example, the idea of “slow living”, a work/lifestyle adapted from the Italian idea of “slow food” in the book New Slow City. The author, William Powers, calculates which project has the highest return on investment, does that one thing, and then spends the rest of his time exploring New York on foot or bike, making friends out of strangers and just…being. Or Tim Ferriss’ book the 4-hour Work Week, which comes with a laundry list of promises that sound too good to be true but doesn’t highlight the one thing it encourages you to do that may be the most radical: simply examining and reimagining your work life.

The way that we work evolves just as everything else does. Job roles change over time, new ones spring up as other factors, such as technology, evolve in tandem. Our workplaces change. In the post-industrial revolution world our physical interactions with our work have changed tremendously. How we conceptualize work is both a personal and a collective cultural experience of when and where you are alive. When housewives went to work in factories in the 1940s to do their part for WWII, they opened the door — many of them unwittingly — for future generations of women in the workforce.

We have choice, no matter how inevitable our daily commute may seem, in how we relate to working. The culmination of our personal choices becomes our societal trajectory. Are we personally going to accept the idea that work is inherently sedentary (or insert any other adjective: stressful, exhausting, boring) or are we going to challenge that. As a society are we going to accept that we need to sacrifice our mental and physical health for our jobs?

Instead of seeing choices such as standing (or running) while you work as something that you do because you read an article that says it’s good for you (or sitting because there’s research that says it doesn’t matter much after all), see it as a step towards exercising autonomy over your own work reality — in whatever way you can to make sure it supports your physical and mental health.

‌
Hey, you have special pricing through your company. 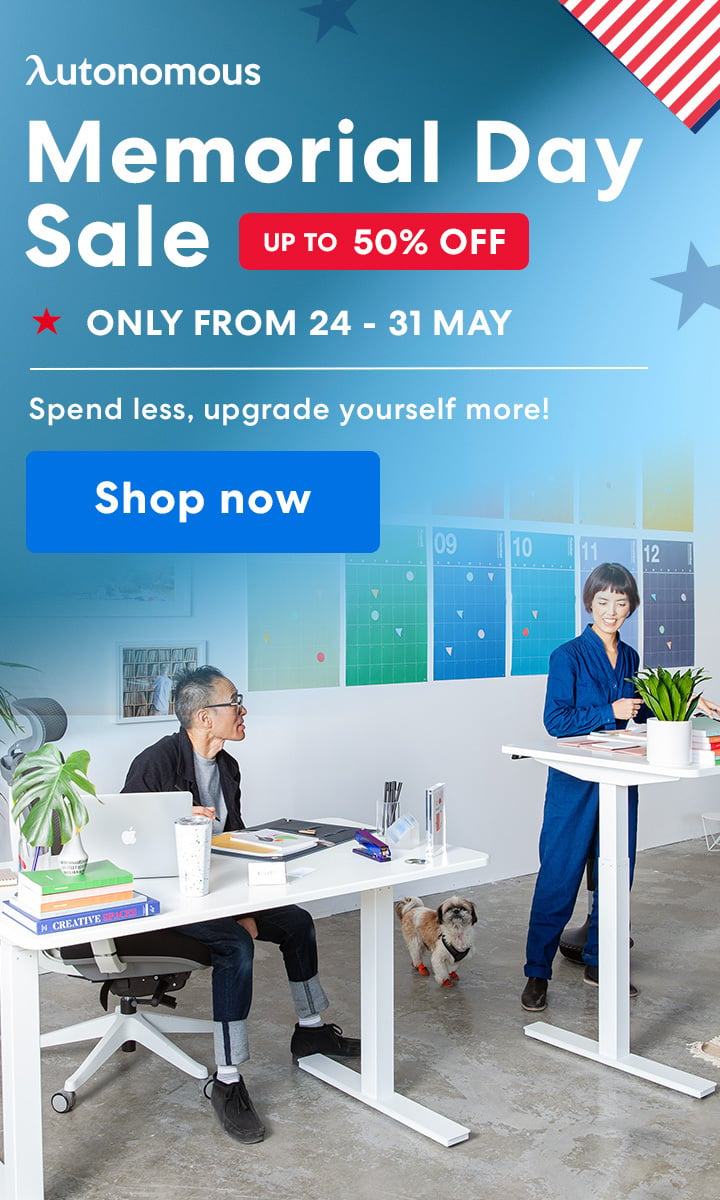