Should Your Kid Use a Standing Desk for Schoolwork?

Sitting for extended hours has proven detrimental to our health, yet we allow our kids to spend over 60% of their day sitting. Standing desks have many benefits for adults so why not extend the benefits to our children as well?

Even more than adults, children are not meant to be sitting all day. Faced by rising rates of obesity, children sit at their desks 5-7 hours a day. A normal life for a child is one that is active and involves the freedom to move around.

You might think of the idea of getting standing desks for our kids as too radical. It’s true that kids have been sitting at schools and for their homework for generations so why change it now?

The problem is not just with sitting still to study but our kids are also spending more time sitting outside school, whether it’s TV, computer, or smartphones.

Unlike adults, who have been trained to sit still from a young age, kids are more fidgety and restless. Asking them to remain seated for extended hours goes against their nature. If we're trying to encourage a more active lifestyle; one where too much sitting feels unnatural, wouldn’t it be best to start with our youngsters? 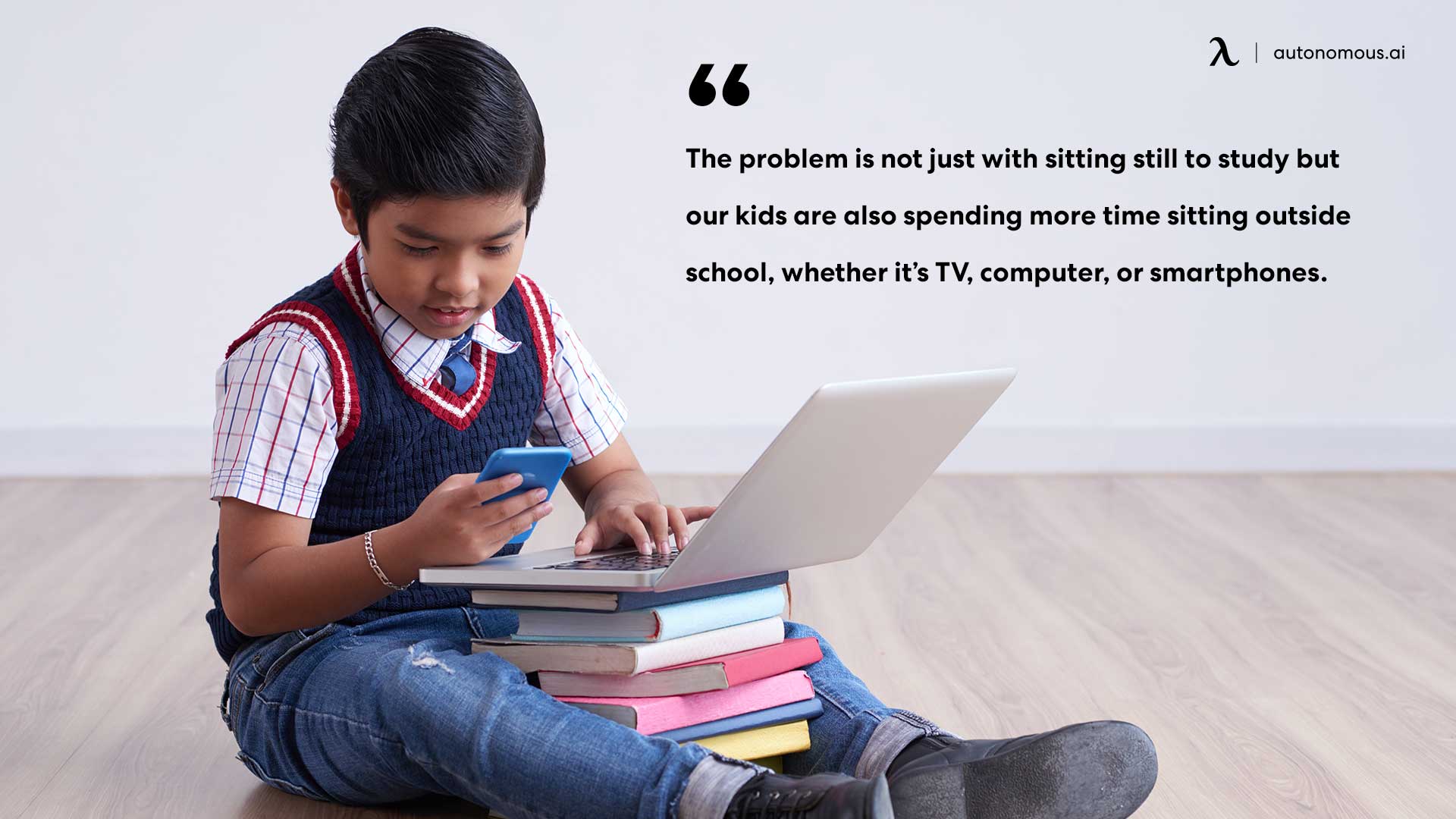 Habits built in childhood usually carry into adulthood, whether good or bad. So let’s help our kids build healthier habits than ours. By the time they’re grown-ups, standing and moving more will be the only normal way to live as opposed to prolonged sitting.

The benefits of alternating between sitting and standing are not just physical. Children’s ability to learn is significantly enhanced when they’re able to move their bodies freely. Several studies have investigated how rewarding it can be to give a child the option to stand at his or her desk.

Standing desks and obesity in children

Childhood obesity is a serious concern. In the US alone, 13.9% among 2- to 5-year-olds, 18.4% among 6- to 11-year-olds, and 20.6% among 12- to 19-year-olds are obese. This is the highest obesity rate ever recorded. According to the National Collaborative on Childhood Obesity Research (NCCOR), “an obese 4-year-old has a 20% chance of becoming obese as an adult, and an obese teenager has up to an 80% chance of becoming an obese adult.”

In an experiment that was conducted by University of Louisville researcher associate professor Monica Wendel, her team spent two years studying 380 students across three texas elementary schools. Some students were in traditional seated classrooms while some were in classrooms that had stand-biased desks (a kid standing desk that has an optional stool).

After adjustment for grade, race/ethnicity, and gender, the group that used standing desks had a 5.24% decrease in BMI compared to those who used traditional desks. This effect was particularly noticeable in overweight or obese children, who burned more calories at the standing desks than their peers, as reported by another study. 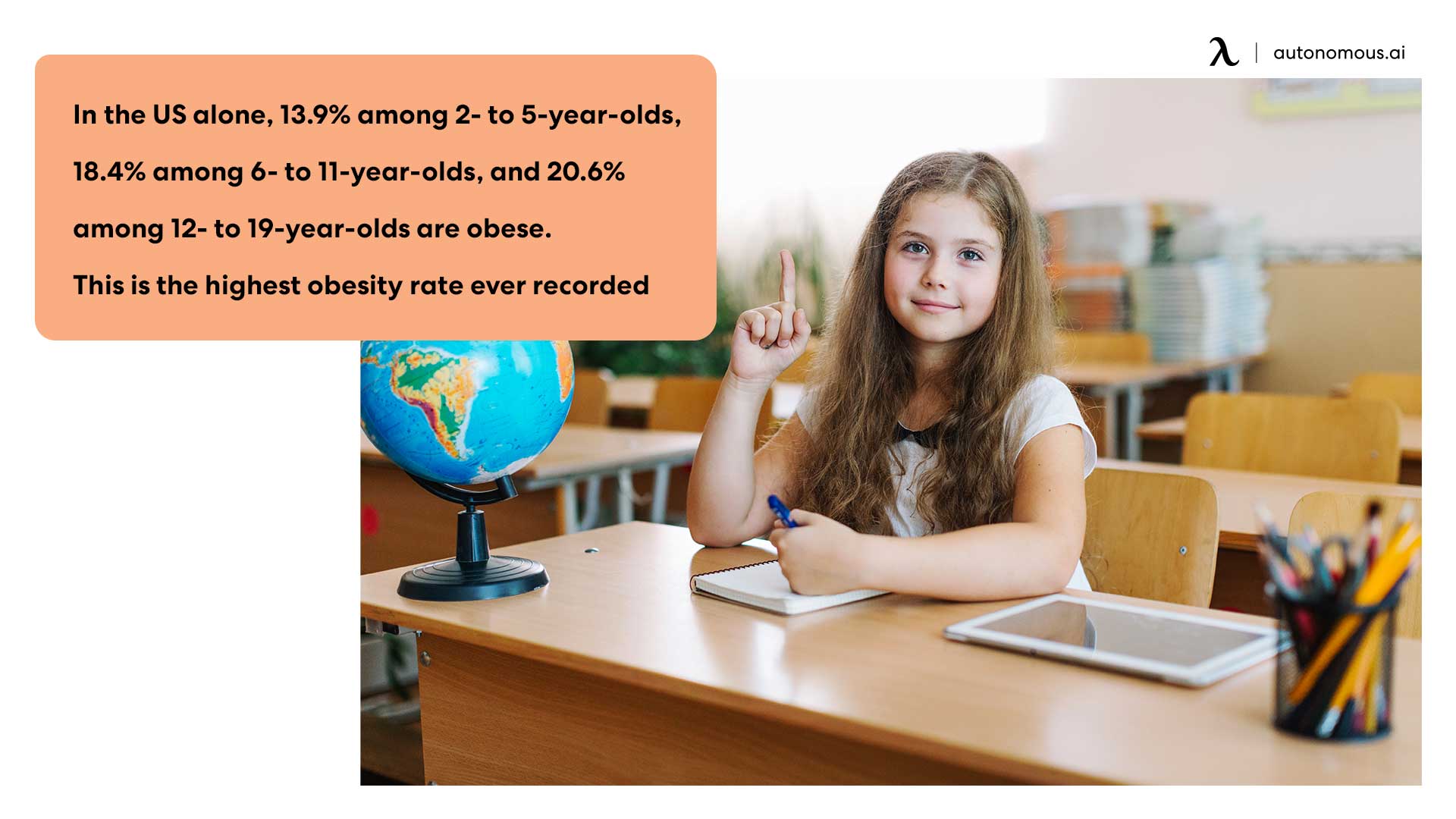 The study concluded that changing classrooms from seated to a stand-biased environment can significantly affect students’ BMI percentile. Simply put, a standing desk is one way to sneak in some extra movement.

Attention is a sought-after commodity. It’s increasingly treasured in childhood where learning is prevalent. Kids in general have a shorter attention span which increases as they grow.

Getting students to pay attention in class has been a challenge that teachers face especially with their younger ones. It gets more challenging when dealing with students who have ADHD and ADD (attention deficit hyperactivity disorder and attention deficit disorder).

In the National Survey of Children’s Health survey which is collected every four years since 2003, the CDC reported that “ an estimated two million more US children were reported by their parents to be diagnosed by a health care provider with ADHD and a million more were reported to be taking medication for ADHD in 2011, compared to 2003.” This is approximately a 45% increase.

To measure the effects of using stand-biased desks, Dr. Mark Benden, associate professor at the Texas A&M Health Science Center School of Public Health, studied class engagement levels of 282 students through three grades (2nd, 3rd, and 4th). The students had the option to stand at their desks or use the stool. 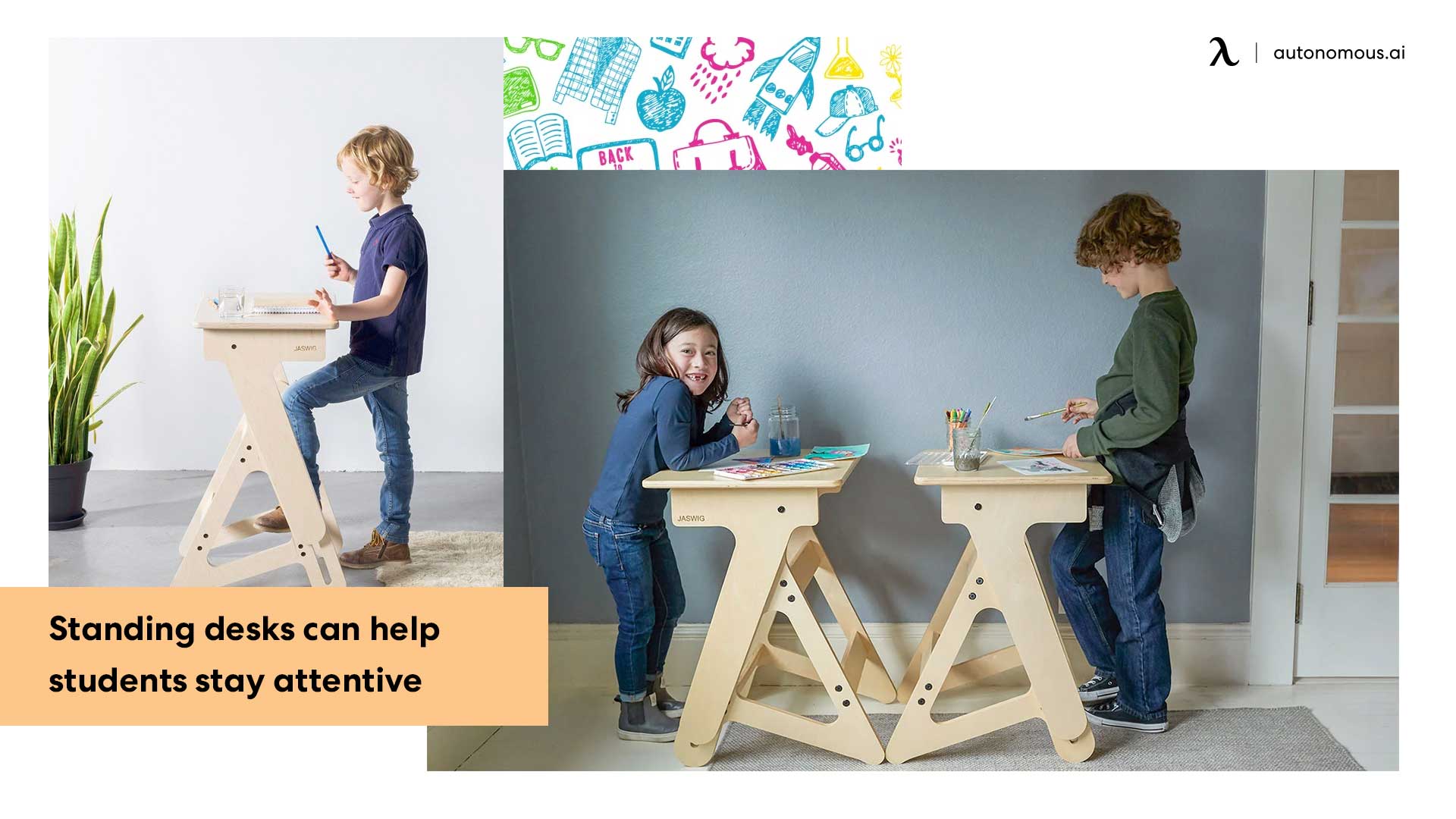 Psychologists monitored their focus level for 2 years. They used markers like how often students took notes and the frequency by which they were distracted by a classmate. As a result, those students were 12% to 25% more engaged in class.

Katie Caritey, an elementary school teacher at Mary Lee Burbank School in Belmont, Massachusetts, has two standing desks in her class for her 24- second graders. She has found that, for her fidgety, more active, or even more tired students, the best learning experience occurs when they’re given the freedom to move frequently throughout their day.

Even with students who aren’t as restless, they noted that using a standing desk in school “makes the time go by faster and [their] work gets finished right away.”

Today, more schools are using standing desks for kids. Educators are better informed of how movement helps children learn. Many have witnessed better focus in class and fewer interruptions than when children are restricted to sitting. As it turns out, having the option to stand when they wish, gives them the chance to get their energy out without distracting their peers.

This year is anything but typical. Parents will need to prepare for a school year of distance learning. This includes setting up a space for their kids to e-learn. In a classroom, parents may not have full control over what kind of seating is used. At home though, the choice is theirs.

Let’s look at it as a chance to instill healthier habits into our kids that will carry on with them into the future.

Nahla is a professional writer who is fond of reading and research. She writes about a wide range of topics.

Home
/Ourblog
/Should Your Kid Use a Standing Desk for Schoolwork?